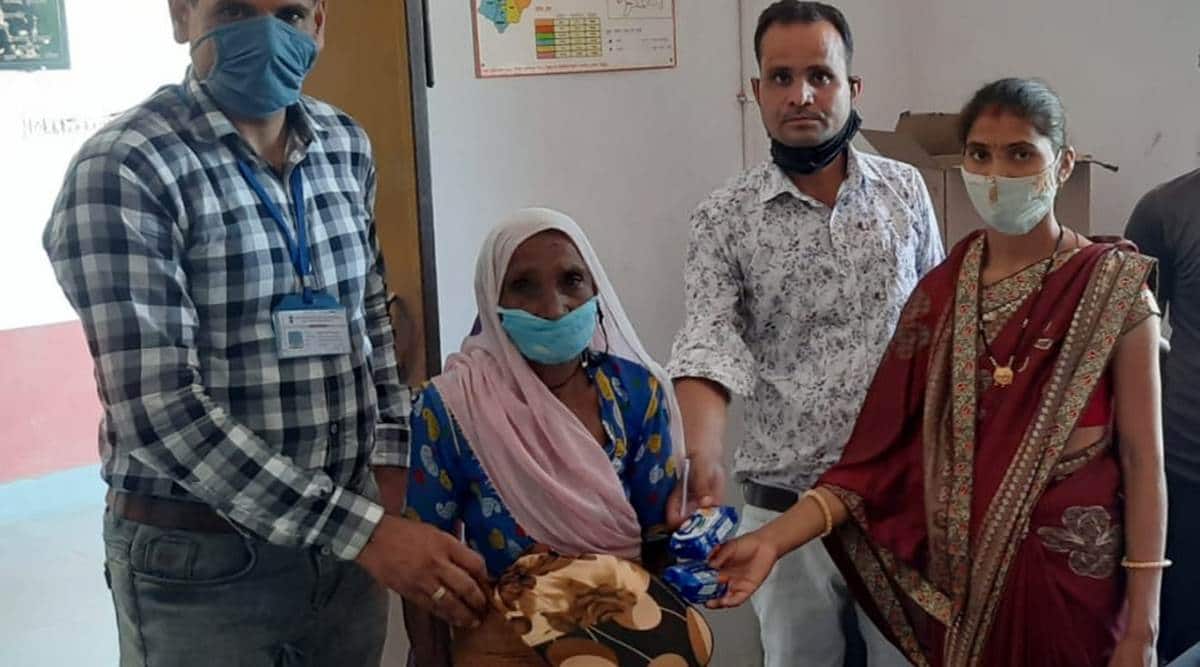 The free ration kits distributed by the administration to those who receive the shots. (Express Photo)

A tribal youth at a village in Udaipur waves a sickle at booth-level officer Dinesh Chandra Joshi, questioning him on deaths due to vaccination. “It’s just a rumour. People died not because of vaccines but Covid-19,” Joshi exhorts. But the youth is not taken in.

As the Covid vaccination drive enters the next phase with the government providing free shots to all adults starting Monday, Udaipur is focusing on persuading the “movable middle” in tribal hinterlands, including with measures like distributing ration kits, offering free travel to nearest Covid centres, and roping in bhupas (tribal priests).

“These kits include oil, poha (puffed rice), rice, dal and flour. We sourced these food items, which were about to expire, from 12-13 tribal hostels, which are shut due to Covid,” she says. With the items sourced from hostels getting over now, some NGOs have come forward to help.

Durga Ram, a government teacher who wields influence in Madri panchayat for having rescued around 100 minors from child labour, says the task to convince villagers, who hold their tradition dear and are suspicious of modern medicine, is tough but not insurmountable.

“When we visit villages, people ask us to guarantee that they will not die post vaccination. Sometimes, we are not allowed to enter villages. But I tell them that if anything happens, I will provide mautana (compensation to a family in the event of death),” he says, vowing 100% vaccine coverage in two weeks.

Singh seconds Durga Ram. “If somebody asks for mautana, we agree to it. Our work is not limited to vaccination. We undertake follow-ups too to ensure that the vaccinated people, through word of mouth, \can spread the message of our good intentions.”

Ration shops are another point of contact for officials. “Here, the village population is scattered and each phalla (the smallest unit in a village) has 10-15 households… At ration shops, our booth-level officers cross-check people vaccinated against electoral rolls. If they haven’t got the shot, our officials persuade them,” says District Magistrate Chetan Deora. The administration also provides government vehicles to take people to nearest centres and bring them back.

Deora denies reports that the tribal community is being arm-twisted with the threat of stopping their ration if they don’t get vaccinated. A video on social media shows an official in Udaipur warning penal action against shopkeepers and vegetable vendors.

At Mavli block of the district, SDM Mayank Manish has adopted a top-down approach. “First, our focus is to vaccinate sarpanchs and panchs. Almost all sarpanchs have been covered. Though our word may not be taken seriously, sarpanchs can present our case more convincingly,” says Manish.

His block has also compiled data on villagers as per their occupation. “There are super-spreaders like shopkeepers and vegetable vendors. We have held special camps for them. For vulnerable groups like widows and differently abled, we are providing free travel to the vaccination centre,” he says.

In Kotra block, which has the lowest vaccine coverage at 6%, the administration though is struggling to push up the numbers. “We are doing our best. We have formed small teams to cover all villages. Bhupas have been contacted. On Saturdays and Sundays, we participate in their pujas to build trust,” says SDM Sadhuram Jat.

Dr Ashok Aditya, the district nodal official for vaccination, blames rumours against vaccines for the prevalent fears. One of the ways they are trying to counter it is through videos of vaccinated people. “These clips are circulated in various groups.”

State Family Welfare Director Laxman Singh Ola attributes the vaccine resistance among tribals to “socio-economic backwardness and low levels of literacy”. “But we are trying to bust myths and discredit rumours. Another hurdle is vaccine availability.”

With 2.08 crore doses administered, Rajasthan is the fourth state to cross the 2-crore mark. It has received or procured 2.21 crore doses of Covishield and Covaxin. On June 19, the Centre informed Rajasthan that the state would be allocated 65.20 lakh vaccines for the month. In its reply on Monday, the state questioned the allocation, saying that even by June 31, around 74.66 lakh people have to be given the second dose.