Arvind Kejriwal swearing-in ceremony highlights: "Your son has taken oath for the third time as the Delhi chief minister. This is not my victory but yours," Arvind Kejriwal said.

Arvind Kejriwal swearing-in ceremony highlights: Minutes after he was sworn in is as the Chief Minister of Delhi for the third straight term, Aam Aadmi Party chief Arvind Kejriwal on Sunday sought the blessings of Prime Minister Narendra Modi and expressed his desire to work together with the Centre for the development of the national capital. “I want to work with the Centre to make Delhi number one city. I want to seek the blessings of PM Narendra Modi for smooth governance of Delhi,” he told the crowd.

The chief minister also said that as the elections are over, he has “forgiven” his opponents for the remarks they made during the poll campaign. He added that this is not his but of every single Delhiite. “Your son has taken oath for the third time as the Delhi chief minister. This is not my victory but yours,” he said.

Around 2,000 personnel of Delhi Police and 25 companies of paramilitary forces were deployed for the ceremony with traffic regulations in place in the area from 8 am to 2 pm. Kejriwal and his Cabinet also shared the stage with 50 special guests from different fields, who have contributed to the capital. In the Delhi Assembly elections, the AAP recorded a massive victory winning 62 of the 70 seats while BJP bagged the remaining eight seats. The Congress drew a blank for the second consecutive time.

Arvind Kejriwal today was sworn in as Delhi Chief Minister for a third consecutive term. Read highlights below. The crowd at Ramlila Maidan in Delhi on Sunday. (Express photo/Abhinav Saha) 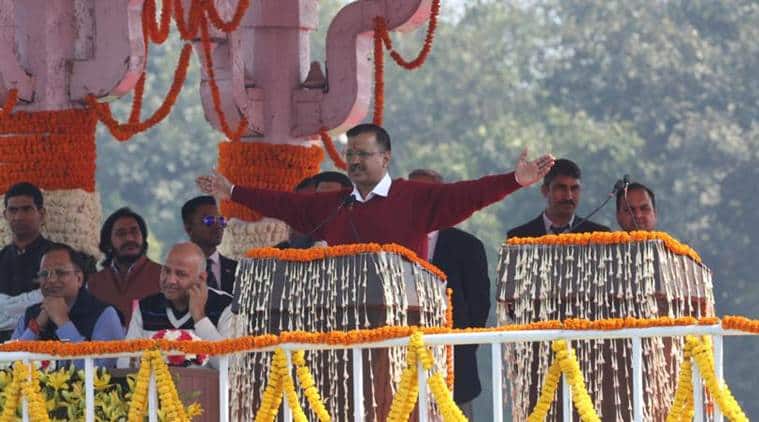 "I had sent an invitation to Prime Minister Narendra Modi for this event. He could not come, maybe he is busy at some other event. But through this platform, I want to take his blessings and say that I want to work with the central govt to develop Delhi and take it forward," Arvind Kejriwal said.

Want to work with Centre to make Delhi number one city: Arvind Kejriwal

On claims that the Delhi government is providing several services free of cost, Arvind Kejriwal said, "I cannot charge the students of Delhi for studies. I can't charge patients visiting Delhi hospitals. The world will soon hail India. I want to work with the Centre to make Delhi number one city."

"I forgive all those who spoke ill of me during the election campaign. Delhiites have given birth to a new kind of politics in the country -- which involves schools, hospitals, electricity, water, good roads and women security," the AAP chief said.

Here to work with everyone, says Arvind Kejriwal

"Some people had voted for AAP, BJP and Congress during the polls. But from now on, I am everyone's chief minister -- irrespective of their political affiliations. In the last five years, I have worked for everyone. I have never worked with bias. Today, the entire two-crore population is a part of my family. Never hesitate to approach me, I will work for everyone. We still have a lot to achieve here. I want to work with everyone together," Arvind Kejriwal told the crowd.

Soon after taking oath as the chief minister, Kejriwal said, "Today, your son has been sworn in as the chief minister for the third time. This is not mine, but your victory. This is the victory of every family in Delhi. In the last five years, we have tried to bring relief and happiness to every family here. We have always focused on development at a rapid pace. We shall continue to do this in the coming five years as well."

Besides Kejriwal, Manish Sisodia, Gopal Rai, Kailash Gahlot and Imran Hussain were also sworn in as ministers in the cabinet.

Arvind Kejriwal has arrived at Ramlila Maidan for the swearing-in ceremony.

"Huge crowd gathered at Ram Leela Maidan to witness yet another historic event. Everyone is here to bless "Delhi Ka Beta" Arvind Kejriwal," the party tweeted.

Huge crowd gathered at Ram Leela Maidan to witness yet another historic event.

Union Environmental Minister Prakash Javadekar on Friday denied calling Arvind Kejriwal a “terrorist”. Speaking to reporters at a press conference in Pune, Javadekar claimed he had never made this kind of statement, reported news agency PTI. Javadekar was asked about his statement ahead of the Delhi Assembly elections, where he had said Kejriwal called himself an anarchist and “there is not much difference between an anarchist and a terrorist”. He further added, “there is plenty of proof that Arvind Kejriwal is a terrorist“.

Delhi elections provided the ‘Vietnam moment’ for India. A significant victory — and vindication of equality and secularism — came when Delhi’s electorate gave a thumping vote. The tukde tukde gangs had won! May the tukde tukde gangs grow stronger until they achieve their Constitutional goals, writes former Union minister P Chidambaram.

Meghnad Desai writes: Why Kejriwal win is a game changer

The crucial moment of the Delhi results came when Arvind Kejriwal led the crowd in calling out ‘Bharat Mata ki Jai’, ‘Inquilab Zindabad’ and ‘Vande Mataram’. He made it clear that Hinduism is not the personal property of the BJP. He ran an astute campaign which did not allow the BJP to distract voters from the solid achievements of the Aam Aadmi Party in delivering public services. He did not fight PM Narendra Modi on the Citizenship (Amendment) Act, and treated it as irrelevant for Delhi polls. This is the new articulate resistance to the BJP’s drive for a Hindu nation. The many demonstrations across India against the CAA are draping themselves in the National Flag. Hindus and Muslims are asserting their common nationality by reciting the Preamble to the Constitution, writes columnist Meghnad Desai.

As Aam Aadmi Party supporters celebrated the party’s victory in the Delhi Assembly elections , a toddler dressed as “baby Kejriwal” stole the show. And now, he has been invited to the swearing-in ceremony today. Several pictures of the “adorable” toddler sporting a moustache, spectacles and a muffler outside AAP’s ITO headquarters in Delhi had gone viral after they were shared by many including the AAP’s Twitter handle. Captioned “big announcement” the official handle of the party tweeted, “Baby Mufflerman is invited to the swearing-in ceremony of @ArvindKejriwal on 16th Feb. Suit up Junior!”

Baby Mufflerman is invited to the swearing in ceremony of @ArvindKejriwal on 16th Feb.

On Saturday, Kejriwal called a dinner meeting of his ministers-designate to discuss the roadmap for Delhi's development, especially the initiatives that need to be prioritised in the coming three months, according to party functionaries.

Hosted my Delhi Cabinet designate colleagues for dinner at my residence. Congratulated them on their victory in the election and wished them success for their terms as Ministers in the Delhi govt. pic.twitter.com/NTAT1yXQUn

Taking to Twitter, Arvind Kejriwal today said, "Today, I will take oath as the chief minister for the third time. Do come to Ramlila Maidan and bless your son."

As many as 77%, or over three-fourths of the 3,335 voters interviewed by The Indian Express reported that their household has been getting decreased electricity bills during the last few months; 66% or two-thirds reported getting reduced water bills; 37% said their household has benefited from the waiving of water bill arrears; 50% said that a woman in their household had benefited from the free bus rides scheme; and 51% reported that either they or a member of their household had availed of free medicines, tests and surgeries at Delhi government hospitals. The survey also found that the impact of these schemes is not just limited to economically worse off sections, but has touched a significant proportion of middle- and upper-class households too.

Other than Arvind Kejriwal, the six ministers who were part of the previous cabinet — MLAs Manish Sisodia, Satyendar Jain, Gopal Rai, Imran Hussain, Rajendra Pal Gautam and Kailash Gahlot — will also be sworn in on Sunday. Delhi, as per rules, can have only a seven-member cabinet.

A notification was issued by the President Friday, appointing the seven to the cabinet. In Delhi, swearing-in can happen only after an intimation about the MLAs in cabinet is sent to the President through the L-G and MHA.

Meanwhile, newly elected BJP MLA Vijender Gupta wrote a letter to L-G Anil Baijal Saturday, requesting him to withdraw a circular that has made it “compulsory” for government school teachers to attend Sunday’s ceremony. Gupta, leader of Opposition in the previous Assembly, said the circular is “dictatorial” and has shattered his belief that Kejriwal’s focus after coming back to power would be on governance and strengthening democratic ethos.