Always affable, with a deep knowledge of facts and the law, it was Arun Jaitley that even the BJP’s detractors turned to for an explanation At different times, in different BJP governments, Arun Jaitley has been a defence minister, a law minister, a corporate affairs minister, and at all times, even if informally on occasion – thanks to a great relationship with most in the media – he’s been the information minister, prime minister Narendra Modi’s chief trouble-shooter. (Illustration: Suvajit Dey)

Arun Jaitley was always more than just a finance minister. At different times, in different BJP governments, he’s been a defence minister, a law minister, a corporate affairs minister, and at all times, even if informally on occasion – thanks to a great relationship with most in the media – he’s been the information minister, prime minister Narendra Modi’s chief trouble-shooter.

Indeed, as leader of the Opposition in the Rajya Sabha prior to 2014, he led his party’s charge on most major issues, both within and outside Parliament.

Thanks to Jaitley’s affable personality, tremendous knowledge of events and great knowledge of the law – he was one of India’s top lawyers when he wasn’t in the government – he was the go-to person for almost everyone, for investors frustrated with the government’s policies, to journalists looking for an explanation on a government policy or simply for reassurance. A product of the Vajpayee era, he had deep friendships across the political system and, whenever he could, Jaitley never shied from helping anyone out; perhaps why, even when the media disagreed with what Jaitley had done, he got away relatively unscathed.

Was the government witch-hunting in the case of P Chidambaram or being vindictive in the case of Prannoy Roy, were the Gandhis really guilty in the National Herald case, and so many other instances? Whether you finally agreed with him or not, it was Jaitley that gave the sharpest argument, with a complete history of the case, even fascinating anecdotes; a true raconteur, Jaitley enjoyed regaling his audience as much as they loved hearing him. Few anti-government television warriors managed to best Jaitley at most times. Later, even when his health failed him and he could no longer have visitors, Jaitley explained the rationale for important government actions through his 24×7 blog. 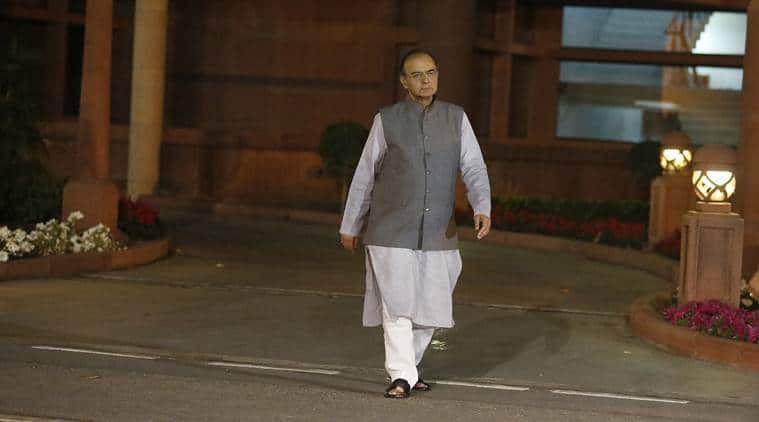 During the Vajpayee years, Jaitley’s big contribution was junking the outdated concept of monopolies. Express Photo by Anil Sharma.

Hardly surprising then, that Modi valued Jaitley’s counsel so much, when the latter wanted to stay out of the government due to health reasons, the prime minister did his best to convince him to stay on. His ability to weigh in on almost all issues apart, it was Jaitley who ensured the BJP named Modi as its candidate for 2014 even as the old guard led by LK Advani were reluctant to do so.

If during the Vajpayee years, Jaitley’s big contribution was junking the outdated concept of monopolies – any big business was distrusted – and replacing this with a more modern definition where abuse of dominance was to be the touchstone, he really came into his own under Modi.

He was clearly the government’s go-to person for all matters judicial and played a key role in the National Judicial Appointments Commission (NJAC) Bill – to propose an alternative to the collegium appointing/promoting judges – that was unfortunately struck down by the Supreme Court. And, as FM, he was central to most government reforms such as the Insolvency and Bankruptcy Code (IBC), perhaps one of the most significant attempts to resolve the banks’ NPA crisis; at a time when allegations of corruption are hurled without even a thought, Jaitley’s IBC solution allows banks to take huge haircuts on their loans but without any accusation of favouritism by the government/banks. If Jaitley had a weakness as an FM, it was giving his officers too much leeway. Express archive photo

Other reforms, apart from GST, that Jaitley played a big role in was the decision to open up the coal sector to private players, and even coming up with election bonds that kept the names of donors to political parties secret while payments were made by cheque was a Jaitley innovation; this is not perfect as donors can remain anonymous, but they remained so even in the past when they made donations in cash.

While Jaitley is blamed for GST being too complex with too many tax rates – what could he do when the states didn’t agree? – it was primarily his persuasion that ensured the number of items in the higher brackets has constantly been pruned; though the composition of the GST Council allows for a vote, Jaitley chose persuasion and has, till date, never used the vote for any decision.

When the UPA left him to deal with the tricky issue of the retrospective tax, he came up with a judicial solution that ensured the government was not accused of favouring anyone while reversing a tax demand made under this law; he said that while the government would not use the law in the future, he would accept all judicial – and arbitral – decisions on the existing cases. It was Jaitley who ensured that BJP named Modi as its PM candidate for 2014. (Express archive)

If Jaitley had a weakness as an FM, it was giving his officers too much leeway; as a result, he was unable to get them to reduce pending tax litigation as fast as he would have liked, and even allowed them to convince him to levy MAT on FII investments. Despite Jaitley’s promise on being fair to victims of the retrospective tax, the tax bureaucracy confiscated Cairn Energy’s shares and dividends and, till now, kept arguing retrospective tax cases couldn’t be arbitrated. It also ensured the promise of a 25% corporate tax was never implemented for large firms, and the much-needed direct tax code which would reform the tax system was also delayed.

With two seasoned BJP politicians passing away within such a short period – coincidentally, Sushma Swaraj was also born in 1952 and also had her kidney replaced – a vital connect with the Vajpayee government, and the gentleness that it came to symbolize, has been lost.