Tension prevailed in the Hills following Barun’s death, with GJM chief Bimal Gurung expressing his condolences and urging agitators to hit the streets. 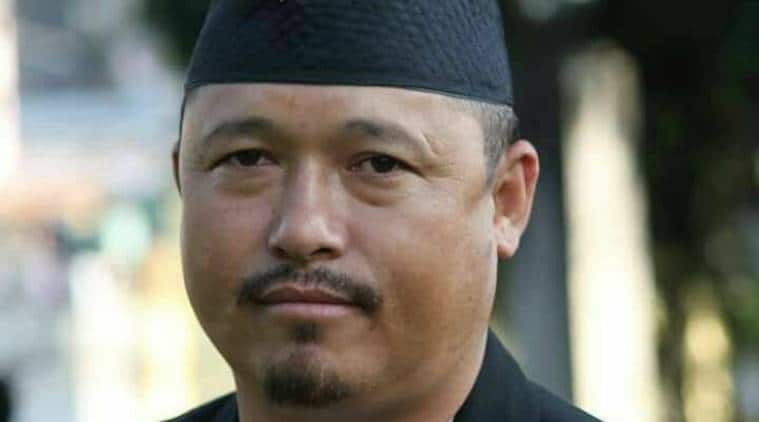 Kalimpong remained shut for the second day as the body of arrested Gorkha Janmukti Morcha (GJM) leader Barun Bhujel arrived in the Hills on Thursday morning. Meanwhile, his family wrote to the National Human Rights Commission (NHRC) and IG prisons for a probe into his death. Barun (40), who was councillor from ward number 16 in Kalimpong, was arrested by police in June in connection with violence in the Hills during the 104-day long strike demanding a separate state for Gorkhaland. He passed away at SSKM Hospital in the wee hours on Wednesday, while under jail custody.

Locals flocked to pay their last tribute and held prayer meetings at various parts of Kalimpong. Major market areas including Pedong Bazar and Algarah Bazar remained shut. As the body reached Kalijhora in Kalimpong, people chanted slogans in his memory. Biren Bhujbel, the GJM leader’s brother, wrote to the NHRC appealing for a post-mortem by an independent medical team from outside of West Bengal, for constituting a special investigation team to probe the death and submit a report at an early date. Sabita Bhujbel, the GJM leader’s wife, wrote to IG prisons demanding a thorough probe into his death and compensation.

In her letter, Sabita wrote, “He was beaten up mercilessly at the time of arrest. Thereafter he was in jail. This is a clear case of custodial torture. Family members were deprived of a chance to see him at SSKM. We demand a thorough probe in the gruesome case of custodial violence and also demand legitimate compensation…” “There was a delay in treatment. In jail, he kept complaining about his ill health but authorities did not pay heed. We have sent written a complaint to the authorities,” said Bharat Bhujel, the councillor’s father.

Tension prevailed in the Hills following Barun’s death, with GJM chief Bimal Gurung expressing his condolences and urging agitators to hit the streets. “Our brother Barun was one of the first to be arrested by police from Kalimpong. I mourn his death and respect his supreme sacrifice for the fight for Gorkhaland. I share my condolences to his family members. It was police torture which ultimately led to his death,” said Gurung in an audio message from an undisclosed location on Wednesday.

“I call upon all Gorkha brothers and sisters to hit the streets in Darjeeling Kalimpong, Kurseong, Terai and Dooars. Gorkhas all over should protest against such human rights violations. I appeal to everyone to observe a day of mourning and shut down,” said Gurung. Later, Yuva Morcha, the GJM’s youth wing, also called for a strike on Wednesday. However, apart from Kalimpong, normalcy prevailed in most areas of Darjeeling, Kurseong and others.

‘Your end has come…’ 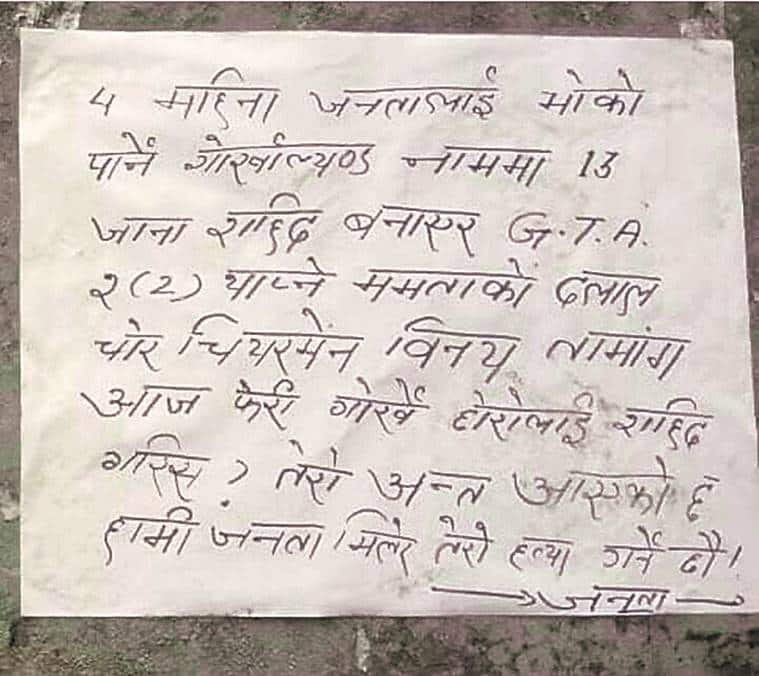 A poster criticising the GTA 2 chairman Binay Tamang was spotted in Kalimpong on Thursday.

A poster spotted in Kalimpong on Thursday read: “For four months you have kept the people hungry and had 13 martyred in the name of Gorkhaland, just so you Binay Tamang could accept the Chairman’s post of GTA 2. Today again you have had one of the Gorkha sons murdered. Your end has come, we janta (the public) will unite to kill you.”