Browne said that Choksi's lawyers gave the names of people involved in the alleged abduction to the police commissioner in a complaint, the Antigua News Room reported. 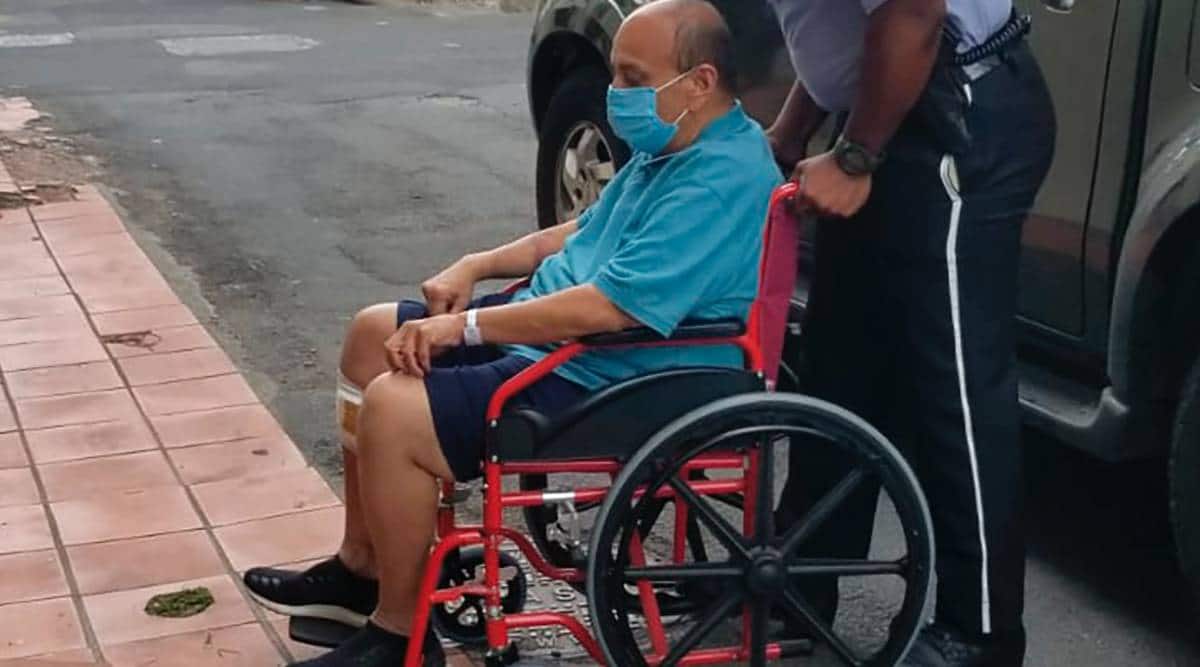 Mehul Choksi is taken in a wheelchair to the Magistrate's court by police after his arrest for illegal entry into the country, in Roseau, Dominica, Wednesday, June 2, 2021. (AP/PTI File Photo)

The Royal Police Force of Antigua and Barbuda has started investigations into the alleged abduction of absconding diamantaire Mehul Choksi to neighbouring Dominica on a complaint filed by his lawyers, Prime Minister Gaston Browne told a local media outlet.

Browne said that Choksi’s lawyers gave the names of people involved in the alleged abduction to the police commissioner in a complaint, the Antigua News Room reported.

The Antigua and Barbuda prime minister also said that if the claims are true, then it is a serious matter.

“Choksi has filed a complaint with the Royal Police Force of Antigua and Barbuda to the extant that he was abducted. He made a formal claim through his attorneys that he was abducted from Antigua and taken to Dominica so it is a report that police is taking seriously and they are currently investigating the abduction,” Browne said.

Another report in the Associates Times poked holes in the theory of Dominica opposition leader Lennox Linton, who had reportedly claimed that Choksi was brought to Dominica in the Yacht Calliope of Arne around 10 pm on May 23.

The family of Choksi had claimed that he was in Antigua till 5 pm on May 23 which makes it impossible to cover a 120-mile distance in four to five hours, which approximately takes about 12-13 hours, the publication said.

The report said that according to Customs document, the boat had left Antigua at 10 am on May 23, whereas Choksi’s domestic staff had said that he was in his residence till 5 pm which indicates that Choksi did not travel by the boat which Linton is claiming.

It quoted unnamed doctors of the Dominica China Friendship Hospital, where Choksi is admitted, that a nail injury cited by his lawyers is an old one while other bruises could be new and could have been caused by even by a “slight push”.

Choksi had mysteriously gone missing on May 23 from Antigua and Barbuda where he has been staying since 2018 as a citizen.

He was detained in the neighbouring island country, Dominica, for illegal entry after a possible romantic escapade with his rumoured girlfriend.

His lawyers alleged that he was kidnapped from Jolly Harbour in Antigua by policemen looking Antiguan and Indian and brought to Dominica on a boat.

Choksi was brought before a Roseau magistrate, on the orders of the Dominica high court, to answer charges of illegal entry where he pleaded not guilty but was denied bail.

He was admitted in the Dominica China Friendship Hospital.

The Dominica High Court has adjourned the hearing of the habeas corpus petition filed by his lawyers.

Choksi and his nephew Nirav Modi had fled India in the first week of January 2018 weeks before Rs 13,500 crore scam in Punjab National Bank (PNB) rocked the Indian banking industry.

The duo allegedly bribed the officials of the state-run bank to get Letters of Undertaking (LoU) on the basis of which they availed from overseas banks which remained unpaid.

The allegedly corrupt officials did not enter these LoUs in the core banking software of PNB, thus evading any scrutiny. The non-payment of these LoUs or bank guarantees worth Rs 13,500 crore resulted in default and became a liability on bank.

Modi escaped to Europe and was finally held in London where he is contesting his extradition to India while Choksi took citizenship of Antigua and Barbuda in 2017 where he had been staying since his escape from Delhi.