The order was issued by ADM (Trans-Gomti) Vishwa Bhushan Mishra on February 13, 2020, said the Tehsildar (Sadar). 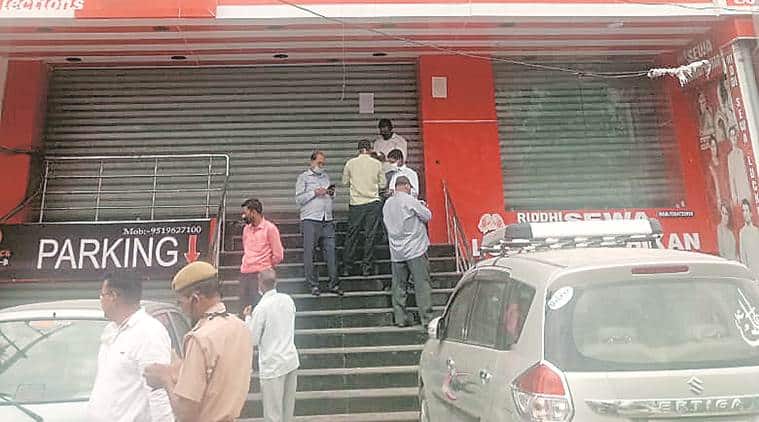 One of the sealed shops in Hasanganj area. (File Photo)

The Lucknow administration on Thursday attached one more shop as part of its exercise to recover damages to public properties during the anti-CAA protests in the city last December. It also announced an auction of the two shops that it had attached and sealed two days ago.

“We have fixed July 16 as the date for auction of the two shops that were sealed on Tuesday,” Tehsildar (Sadar) Shambhu Sharan Singh said, adding that if the owners of the shops can pay the damages in the coming days, their properties will be opened and auction proceedings will be halted.

The two shops sealed earlier included a garment store – NY Fashion Centre – and a junk shop in Hasanganj. The junk shop owner, Maahenoor Choudhary, and the garment shop’s assistant store manager, Dharamveer Singh, are among the 13 people who have been ordered to pay Rs 21.76 lakh for the destruction of public properties in the Hasanganj police station area during the anti-CAA protests on December 19 last year.

The order was issued by ADM (Trans-Gomti) Vishwa Bhushan Mishra on February 13, 2020, said the Tehsildar (Sadar).

A welding workshop, which was sealed on Thursday, is located in Khurram Nagar area of the city and belongs to one Mohammad Nafees.

Nafees has been accused by the police of vandalism at Parivartan Chowk under Hazratganj police station during the December 19 protests against the new citizenship law and proposed National Register of Citizens (NRC).

According to an order passed by ADM (East) KP Singh on February 17 this year, 28 people have been asked to pay for damages to properties worth Rs 63,37,637 in Hazratganj area.

A total of 57 people across four police stations have been served notices for the recovery of Rs 1.55-crore. In March, their photographs and addresses were displayed on hoardings across the city, triggering criticism from the courts.

Following a suggestion from the Allahabad High Court, the Lucknow administration on March 20 had stopped all actions such as attachment of properties and arrests taking into account the coronavirus pandemic.

UP: 17 foreign Tablighis released on bail