Manish Tewari: Enforcing accountability should be first agenda of CWC rather than to name president

Congress leader and Anandpur Sahib MP Manish Tewari speaks to The Indian Express on the leadership crisis in the party and divergent views among leaders on the Kashmir issue. "Those who spoke out on Kashmir should have lodged their dissent in CWC." 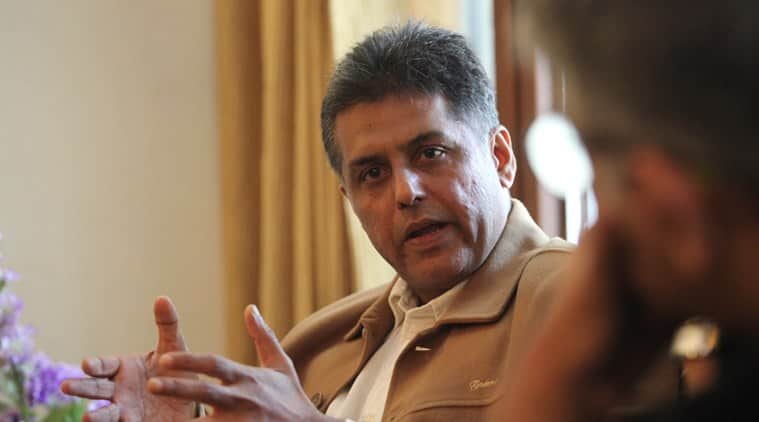 Congress leader and Anandpur Sahib MP Manish Tewari speaks to The Indian Express on the leadership crisis in the party and divergent views among leaders on the Kashmir issue. Excerpts:

The Congress Working Committee is meeting Saturday to decide on the leadership issue. There is a young versus old debate now playing out in the Congress. What is your view?

Rahul Gandhi was elected in 2017 for a term of five years. So, he would have remained as the president of the Indian National Congress till 2022. He chose in wisdom to take responsibility for the 2019 results. And he stepped down essentially to enforce the principle of accountability and the principle of accountability must be taken to it’s logical conclusion. So, the first thing that must be kept in mind is the raison d’être of the resignation… the rationale of the resignation is two-pronged.

The first prong is that I take responsibility for the 2019 results and I stepped down because I feel that accountability should start at the top. Therefore, under those circumstances, this principle of accountability which the resignation seeks to enforce, or seeks to impress upon people, is something which needs to be very seriously deliberated upon.

His letter came into the public domain a month ago but there has not been much debate about the accountability principle.

We do that letter a great disservice by not seriously deliberating upon the contents of it. Because Mr Gandhi has done the honourable thing. Rarely in politics do you find people doing the honourable thing. And the reasons that he has enunciated in his letter, I think should form the first agenda of the meeting of the Working Committee. Because those are the principles that he seeks to inform us of by being the first person to take responsibility.

Mr Gandhi could have carried on, nobody asked for his resignation. In fact, everybody told him to carry on. So I think the first and the foremost responsibility of the Congress Working Committee, being the highest decision making body of the party, is to actually apply itself to that letter and try and internalise and absorb the message that that letter is trying to send out rather than getting into this game of musical chairs as to who should be the next person to choose to sit in the President’s chair because as long as we do not conceptually internalise and understand why a certain course of action has played itself out, I do not think that we will be able to really commence the process of rebuilding the party in earnest.

But the question remains on who should be the next Congress president?

I think this young versus old and experience versus dynamism debate is a completely sterile debate. What you require is someone who would be able to or who would have sufficient gravitas, sufficient organisational journey to be able to command the respect and commitment of Congress workers and leaders across the country. The challenge at this point in time is to keep the party together, keep it cohesive. And that is how you will prepare for the long haul. This is the time for consolidation. You know, this is in my opinion, not the time for experimentation.

Do you think the 50 wise men and women in the Congress Working Committee should decide amongst themselves or should there be genuine elections.

I am not ruling out elections… That is an option which they need to also consider. Would they want to follow the mandate of Article 18 H of the Congress constitution or would they possibly also like to consider that maybe the CWC actually appoints a central election authority and that authority, then, in a time bound manner, conducts organisational elections to both the (post of) Congress president and to the CWC.

But if the members of the CWC decide to elect one among themselves, would that exercise lack legitimacy and credibility?

Coming to the Kashmir debate, many leaders like Janardan Dwivedi, Karan Singh, Jyotiraditya Scindia and Deepender Hooda are all airing divergent views?

Most of the names you mentioned are also members of the CWC. If they really had a strong point of view, they should have dissented in the CWC. You cannot say one thing outside and another thing in the Congress Working Committee. If you were so convinced that what you are saying is absolutely correct, or what the government is doing is absolutely correct and not a constitutional travesty as all of us pointed out in Parliament, then you should have demonstrated the conviction of courage to be able to dissent in the Congress Working Committee itself and record your dissent.

Their view is that the public sentiment is in favour of abrogation of Article 370.

If you decide to run a country depending upon or basing yourself upon public sentiment rather than the Constitution of the country, then I am afraid you are converting a democracy into a mobocracy. And is something which they should seriously reflect upon. Because if public sentiment is really going to run a nation, then you are essentially throwing the Constitution into the Bay of Bengal and the rule of law into the Indian Ocean.

If the Congress comes back to power after 5 years, will you bring back Article 370 in its old form?

I think you’re putting the cart before the horse because it’s early days as yet. You will have to wait and see as to how this is going to play itself out in Jammu and Kashmir. And the fact that the government is extremely nervous about it was demonstrated on the floor of Parliament when the Home Minister said that we will upgrade a Union territory into a state very soon. So if you are committing yourself to upgrading the Union territory into a state very soon, it begs the question why did you dismember the state in the first place?

My question is will you reverse the revocation of Article 370?

You asked a fair and legitimate question. And I think the answer would lie down the line depending upon the way things play themselves out, because I do not see this playing out very well. And at some point in time, you will need to have a political modus vivendi with the stakeholders in Jammu and Kashmir because essentially, what you’ve done is you’ve even sidelined those mainstream leaders who used to carry the flag of India, in Jammu and Kashmir.

I think it’s too premature to actually make a defining comment or a determinate commitment on that. This issue has an international dimension also. If you go back to the Instrument of Accession, what did Maharaja Harisingh accede to India on the 26th of October 1947. It was the undivided state of Jammu and Kashmir or the unoccupied state of Jammu and Kashmir as it stood on the 15th August 1947. So, your entire claim, even in bilateral negotiations with Pakistan is that the entire state was acceded to you. Now when you decide to deconstruct that state, you’ve actually de facto legitimised the Pakistani aggression and have allowed them ipso facto to retain the areas which they illegally occupied. When you go back to the negotiating table, at some point in time, to say that we want to reclaim that part of Kashmir which is illegally occupied by Pakistan and ceded to China later, the counter argument is going to be but that state of Jammu and Kashmir now ceases to exist.