AMU Jinnah portrait row: What has happened so far

Tension prevailed in Aligarh and students continued their protests demanding action against right-wing protesters who entered the campus and wanted the Pakistan founder's portrait removed from the student union office of AMU. 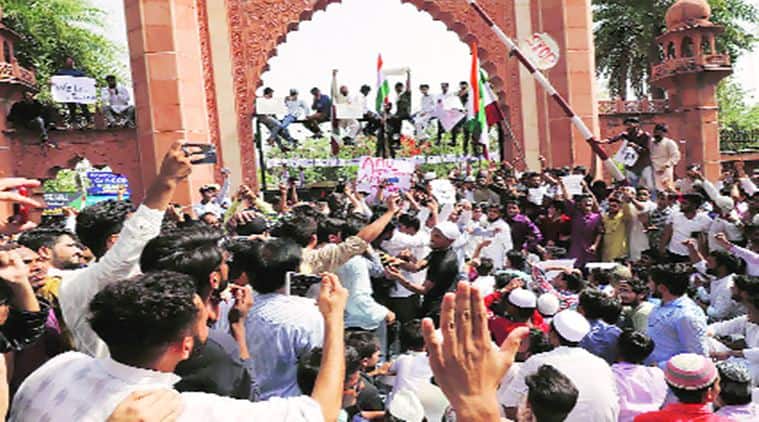 Internet services were suspended on Friday in the wake of the unrest in Aligarh Muslim University over the portrait of Mohammed Ali Jinnah. Protests have reached Delhi and students were seen protesting outside Uttar Pradesh Bhawan in the national capital in support of the AMU students. Tension prevailed in Aligarh and students continued their protests demanding action against right-wing protesters who entered the campus and wanted the Pakistan founder’s portrait removed from the student union office, where it has been hanging for decades.

So what happened in AMU?

A BJP MP has asked Aligarh Muslim University to explain why it displays a portrait of Muhammad Ali Jinnah, triggering a row, days after a student sought permission to hold an RSS shakha on its premises. In a letter written to Vice Chancellor Tariq Mansoor on Monday, Aligarh MP Satish Gautam objected to Pakistan founder’s picture on the walls of the AMU student union office.

What were the consequences?

Later on Wednesday, over two dozen people were injured when Aligarh Muslim University (AMU) students clashed with police. The clash was triggered as police prevented a students’ march against an attempt by activists of RSS affiliate Hindu Jagran Manch (HJM) to storm into the campus earlier in the day.

SP Atul Kumar Srivastava confirmed that slogans were raised against Jinnah and torched his effigy before the police chased them away. Police lobbed teargas shells to disperse the students of Aligarh Muslim University demanding the arrest of outsiders who had barged into the campus, shouting slogans demanding removal of the portrait of Muhammad Ali Jinnah from students’ union office.

The AMU informed the Centre and the state government about the situation while asking the students to maintain peace. AMU Teachers’ Association (AMUTA) asked the Centre to order an impartial, time-bound judicial inquiry to punish the culprits. It condemned “the deliberate criminal activity” at the University main gate. “Instead of taking action against criminal aggressors, AMU students… were re-victimised by lathi-charge,” AMUTA said in a statement.

Internet services were suspended in the region as it had come to the administration’s notice that some anti-social elements could vitiate communal harmony by spreading rumours through videos, using internet services, his order said.

According to the AMU Students Union (AMUSU), the group of students who had entered AMU campus on Wednesday to protest against display of a portrait of Jinnah were looking to target former Vice President Hamid Ansari, who was on campus at the time.

In a complaint to the police, AMUSU alleged that 20 to 25 people of right-wing students’ outfits from other colleges entered the campus, raising slogans against Ansari.

Meanwhile, veteran lyricist-screenwriter Javed Akhtar waded into the row on Thursday, saying it was “shameful” that the portrait of Muhammad Ali Jinnah was put up in Aligarh Muslim University but people, who were protesting against it, should also oppose the “temples made to honour Nathuram Godse”.

The NCP on Thursday accused BJP of raking up the issue of Muhammad Ali Jinnah’s portrait at the Aligarh Muslim University (AMU) for political gains. The Sharad Pawar-led party also dared Maharashtra Chief Minister Devendra Fadnavis to accept the demand of BJP legislator Mangal Prabhat Lodha to demolish the Jinnah House, once the Mumbai residence of Pakistan’s founder.