The 1978 clash is considered a watershed moment that subsequently pushed Punjab into the dark phase of terrorism and brought Sikh militant leader Jarnail Singh Bhindranwale in spotlight. 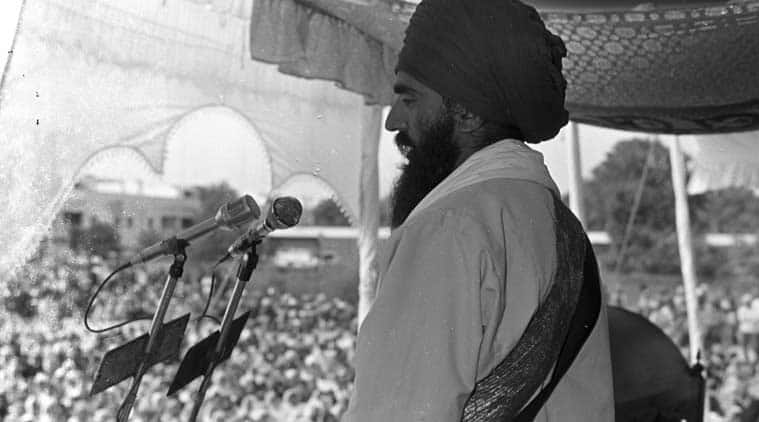 In 1978, Sikhs led by Jarnail Singh Bhindranwale (pic) and Fauja Singh were miffed with Nirankari chief Gurbachan Singh for holding a convention in Amritsar as they were at loggerheads with sect on a number of issues. (File/Archives)

More than four decades after a bloody clash between Sikhs and Nirankari sect in Amritsar on the occasion of Baisakhi on April 13, 1978 left 13 Sikhs dead, Sunday’s grenade attack at the sect’s Dera in Amritsar is being seen as an attempt by the Sikh radicals to disturb communal harmony in Punjab. The 1978 clash is considered a watershed moment that subsequently pushed Punjab into the dark phase of terrorism and brought Sikh militant leader Jarnail Singh Bhindranwale in spotlight.

“Prima facie it appears to be terrorist act. Target is not individual, but a congregation and group of people sitting there. We are investigating the case and can reveal more only after the investigation,” said Punjab Director General of Police Suresh Arora.

Nirankari sect sources said that the sect’s executive committee was concerned about the attack and a few members of the committee had gone to Amritsar to take stock of the situation.

Sunday’s attack comes days after Army Chief General Bipin Rawat cautioned about attempts to revive insurgency in Punjab. Punjab is also currently on a high alert following an input by Counter Intelligence Wing of the state police about presence of nearly seven Jaish-e-Mohammad terrorists in the state. It also comes in the backdrop of a series of terror modules busted by Punjab Police, including arrests of Kashmiri students allegedly linked to separatist movement accused of carrying out blasts at Maqsudan police station in Jalandhar.

READ | Maybe Army Chief has got it done to prove himself correct, says AAP MLA

Punjab Police officers say that there seems to be a pattern where state’s youth are being lured and radicalised to carry out terror acts in Punjab by the handlers abroad at the behest of Pakistan’s ISI.

In 1978, Sikhs led by Jarnail Singh Bhindranwale and Fauja Singh were miffed with Nirankari chief Gurbachan Singh for holding a convention in Amritsar as they were at loggerheads with sect on a number of issues, most prominent among those sect’s belief of considering its chief as ‘satguru’. Sikhs, on the other hand, consider Guru Granth Sahib as living guru of Sikhs after tenth Sikh master Guru Gobind Singh.

“Nirankari sect referred to Guru Granth Sahib in sermons, but still believed in ‘gurudom’ at same time. This was the main conflict. There were other issues also. Like Nirankari sect had seven ‘sitare’, a sort of parallel to five ‘panj pyaras’ of Sikh guru. This also did not go down well with Sikhs. And in their literature, they had derogatory comments, complaints of which were even made to then Prime Minister,” said Dal Khalsa spokesperson Kanwarpal Singh, while commenting on 1978 clash.

On the other hand, Gurbachan Singh had the view that sect was doing nothing wrong and people needed to understand the ideology of the sect in depth.

In April 1978, after a procession in Amritsar when Nirankari sect followers reached their ashram in Amritsar, a group of nearly 200 Sikhs led by Fauja Singh and Bhindranwale went to lodge protest. 13 Sikhs, including Fauja Singh, were killed in a clash. The trial of the case was shifted to Haryana where a court acquitted the Nirankari men on the ground that they acted in “self-defence”.

This had Bhindranwale declare a fight to get justice. On April 24, 1980, then Nirankari sect head Gurbachan Singh was assassinated. Assasinations and attempts on pro-Nirankari sect leaders followed.

Ranjit Singh associated with Akhand Kirtani Jatha admitted to having assassinated Gurbachan Singh and was sentenced to prison for over 10 years. Subsequently, Ranjit Singh was appointed as chief (Jathedar) of Akal Takht in absentia when he was in jail and when Akali leader Gurcharan Singh Tohra was the SGPC president. Ranjit Singh was formally coronated as Akal Takht chief in 1997 after he was out of jail.

“It all started as a fight against Nirankari sect. But, subsequently, particularly after Army attack on Golden Temple, it became a fight with the State. Now after more than 34 years, Nirankari sect is under attack again. This is surprising. There was no immediate trigger like it was in 1978,” said Kanwarpal Singh, adding that he was yet to analyse the situation fully.

SAD patron and former CM Parkash Singh Badal, in a statement issued Sunday, said, “Tendency of Congress rulers in the state to encourage, promote and flirt with enemies of peace for political mileage was pushing the state back to its dark days at an alarming pace.”

Asserting that SAD-BJP government always kept peace and communal harmony in the state as a top priority, Badal stated: “Suddenly, the priorities have changed with the change of the government in the state. Punjab has witnessed a dangerous drift over the past 22 months.”

“Political opportunism of the worst kind being displayed by the Congress leaders in the state today is a sure recipe for disaster for peace and communal harmony,” Badal said, adding that “the same cynical and opportunistic anti-SAD conspiracies of the Congress had led the state into the tragedy of the eighties and the early nineties”.

SAD president Sukhbir Badal, in a statement, said there was complete break down in law and order and that Congress government “made things worse by encouraging divisive elements”.

“This sent out a wrong message and has seen peace take a beating as was witnessed in the Maqsudan bomb blast as well as busting of heinous conspiracy to assassinate five times CM Parkash Singh Badal by the Uttar Pradesh police,” Sukhbir said.

United Akali Dal president Mohkam Singh whose party is a participant in Bargari morcha to seek action in cases of sacrilege and police firing in 2015, said, “Attack on Nirankari sect ashram should be thoroughly probed. It smells of politics. It is unfortunate that innocent people were killed.”

Searchers in California wildfire step up efforts before rain