He said a Special Investigation Team (SIT) has been constituted and directed to complete the investigation within one month. 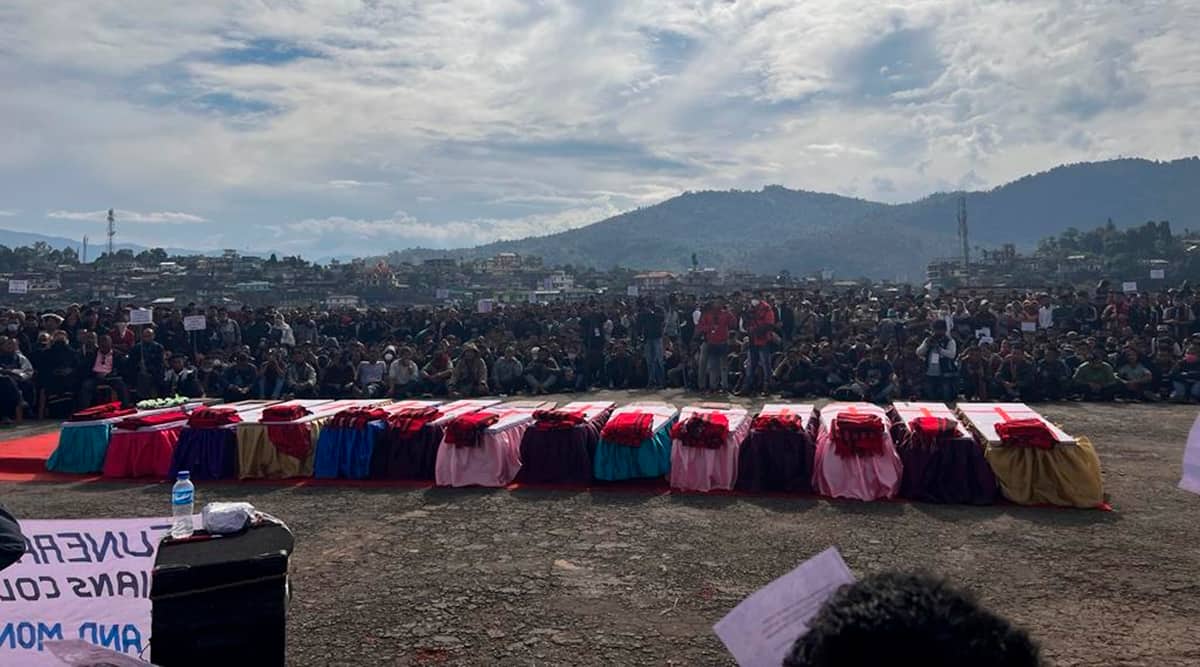 The coffins of people killed on December 4 are laid out in a row during a public funeral in Mon, Nagaland, on Monday, Dec. 6. (AP)

Expressing regret over the incident in Nagaland in which civilians were killed by security personnel, Union Home Minister Amit Shah informed Parliament Monday that “a team of 21 para-commandos of Indian Army laid an ambush” for insurgents in Mon district on December 4 evening but “it turned out to be a case of mistaken identity”.

He said a Special Investigation Team (SIT) has been constituted and directed to complete the investigation within one month. The situation, he said, was “reviewed in detail to ensure that normalcy is restored at the earliest” and all agencies are being told to “ensure that no such unfortunate incident recurs in future while undertaking operations against insurgents”.

In identical statements in Lok Sabha and Rajya Sabha, Shah said: “The Government of India sincerely regrets this unfortunate incident in Nagaland and expresses its deepest condolences to the families of those who have lost their lives.”

Speaking in the Lok Sabha. https://t.co/dfr2jUvluw

“Based on inputs received by the Indian Army about movement of the insurgents near Tiru village in Tizit area of Mon district, a team of 21 para-commandos of Indian Army laid an ambush in the evening of 04.12.2021. During the ambush, a vehicle approached the location and it was signaled to stop. However, the vehicle tried to flee, following which the vehicle, suspected of carrying insurgents, was fired upon resulting in killing of 6 out of 8 persons travelling in the vehicle. However, it turned out to be a case of mistaken identity. The two persons who sustained injuries were evacuated to the medical facilities by the Army personnel,” he said. 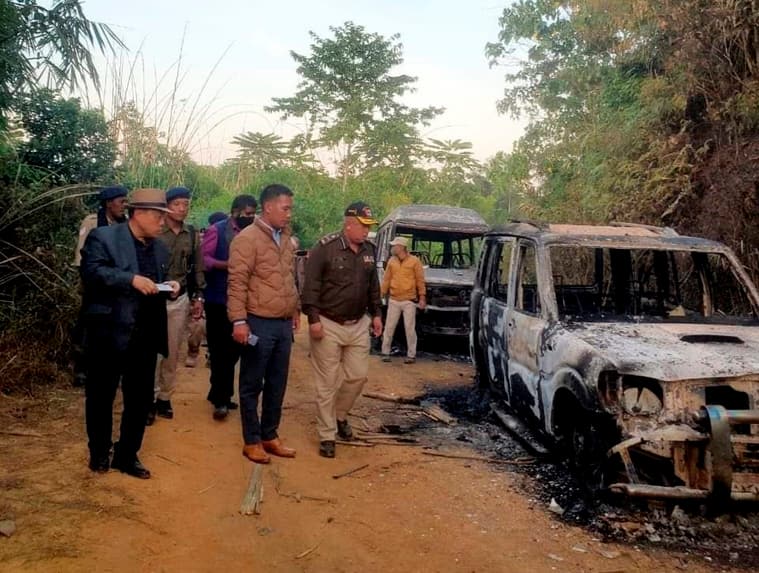 Mon: Charred remains of vehicles of security personnel after they were put on fire by some miscreants over the death of 13 people in the Mon district. (PTI)

“Upon receiving the news, local villagers surrounded the Army team, burnt two vehicles and assaulted them, resulting in death of one Security Force (SF) personnel and injuries to several others. To disperse the crowd, SFs opened fire which resulted in killing of 7 more civilians and injuring some others,” he said, adding that the local administration and police have tried to defuse the situation which “remains tense but under control”.

He said the Director General of Police and Commissioner visited the spot on December 5. “An FIR was registered regarding the incident in Tizit Police Station and considering the complexity of the case it has been transferred to the State Crime Police Station (SCPS) and a Special Investigation Team (SIT) has been constituted and directed to complete the investigation within 1 month,” he said. 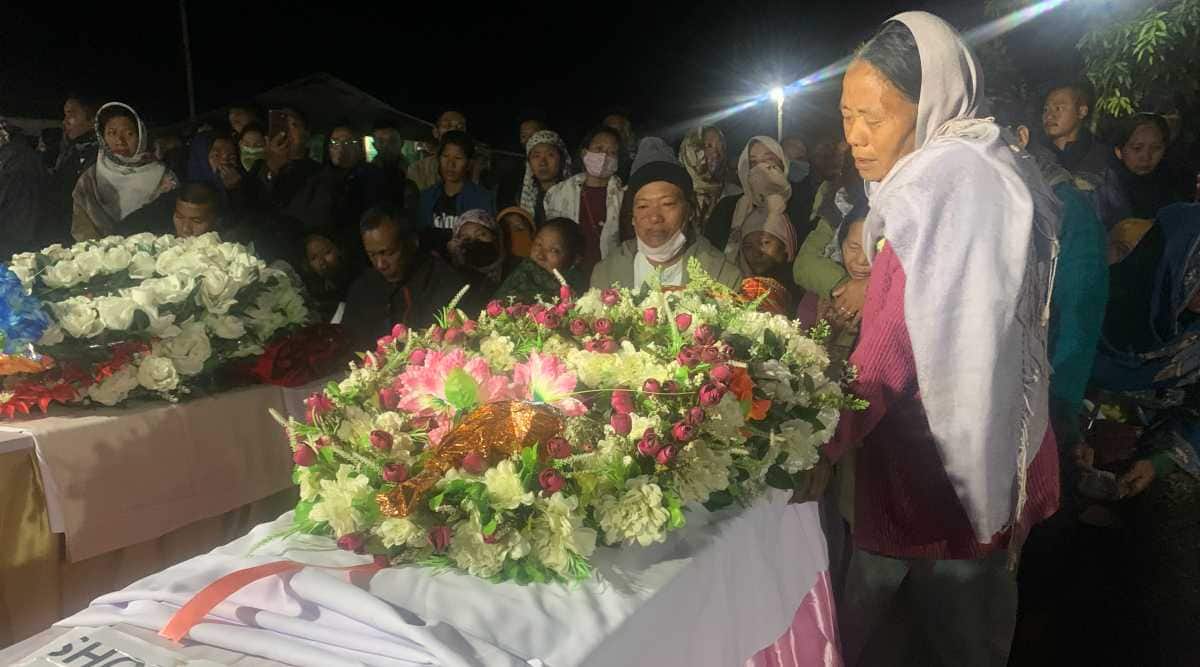 Family member of a deceased breaks down after receiving his body. (Express Photo: Tora Agarwala)

On December 5 evening, Shah said, “a mob of approximately 250 tried to ransack the Company Operating Base (CoB) of Assam Rifles at Mon town. The mob burnt buildings of the CoB following which troops had to open fire to disperse the mob. Resultantly, one civilian was killed while another was injured. More forces have been deployed in the area to prevent any further untoward incident”.

“The HQ 3 Corps, Army has released a press statement wherein they have deeply regretted the incident and its aftermath which resulted in the unfortunate killing of innocent civilians and it further mentioned that the cause of the unfortunate loss of lives is being investigated at the highest level and appropriate action will be taken as per law.”

“On receiving news of the incident, I immediately got in touch with the Governor and the Chief Minister of Nagaland. The Ministry of Home Affairs (MHA) also got in touch with the Chief Secretary and the DGP of Nagaland and monitored the situation throughout the day yesterday. MHA also deputed Additional Secretary, in-charge of North East to Kohima wherein he held a meeting with Chief Secretary and other senior officers of State Government of Nagaland and senior officers of the Para-Military Forces today morning. The situation was reviewed in detail to ensure that normalcy is restored at the earliest. It was decided that all agencies should ensure that no such unfortunate incident recurs in future while undertaking operations against insurgents,” Shah said.

“The Government is keeping a close watch on the evolving situation and necessary measures are being taken as per requirement to ensure peace and tranquility in the region. The state authorities, as a precautionary measure, have promulgated prohibitory orders in the affected areas,” he said.

With Omicron keeping international travellers away for longer, Rajasthan’s tourism sector has worrying times ahead