Amit Shah in Kolkata Highlights: "Sonar Bangla will not be formed under Mamata Banerjee. Bring the BJP to power and in five years, we will make the dream come true," Amit Shah said.

Amit Shah in Kolkata Highlights: Home Minister Amit Shah on Sunday said that dreams of “Sonar Bangla” will not be fulfilled under Mamata Banerjee. Addressing a rally in Kolkata’s Shahid Minar Grounds, Shah said, “Bring the BJP to power and in five years, we will make the dream come true. This government of Mamata di is not allowing PM Modi to develop West Bengal. You gave chances to the Communists for two decades and to Mamata di for 10 years. Did they develop the state? No. Give us five years, we will turn Bengal into Sonar Bangla.”

Shah arrived in Kolkata to address a rally on the Citizenship Amendment Act amid protests by opposition parties who raised ‘Go back’ slogans outside the airport. He also inaugurated a new building of National Security Guards at Rajarhat earlier in the day. This is Shah’s second visit to West Bengal after assuming office as Union Home Minister. Party workers from districts across Bengal began pouring into the city since Saturday night to attend the ‘Abhinandan’ rally. They are expected to take out rallies from different points in the city including Howrah station and converge at the rally venue.

CPM leader Mohammad Salim, who has called upon the people of the state to protest against Shah’s visit, had earlier told reporters, “The youth and students’ wings of our party will hit the streets on March 1 to protest against the arrival of the Union home minister here. All democratic people should also join this protest.”

The incendiary ‘Goli maaro…(shoot the traitors)’ slogan was heard in Kolkata on Sunday after it was reportedly raised by a section of BJP workers on their way to Union Home Minister Amit Shah’s rally at Shahid Minar ground. Sharing a video of the incident, CPI(M) leader Mohammad Salim said it took just one visit from the Home Minister to spread the ‘Goli maaro’ slogan in the city. Read more...

All it took was one visit of Amit Shah to spread the "Goli Maaro Saalon Ko" slogan in Kolkata.

The followers of Godse might be impressed with "Goli" but Bengal is the land of Vivekananda, Kazi Nazrul Islam and Tagore. #GoBackAmitShah pic.twitter.com/x5n1RZSSEz

Amit Shah in Kolkata: 'Give us five years, we will turn Bengal into Sonar Bangla'

"The Sonar Bangla will not be formed under Mamata di. Bring the BJP to power and in five years, we will make the dream come true. This government of Mamata di is not allowing PM Modi to develop West Bengal. You gave chances to the Communists for two decades and to Mamata di for 10 years. Did they develop the state? No. Give us five years, we will turn Bengal into Sonar Bangla," Amit Shah said. Amit Shah in Kolkata: 'Why is Mamata protesting against CAA?'

"Mamata di raised the issue of citizenship to refugees herself when she was in the opposition. However, when PM Modi brought the CAA, she is standing with the Congress and Communists in Opposition again There were riots in Bengal. Trains and railway stations were burnt. How have the Dalits wronged you in any way? Why are you protesting when we want to give them citizenship? " Amit Shah said.

'Under Mamata's leadership, Bengal is lagging behind in terms of development. You cannot have 'sonar Bangla' under Mamata's watch,' Amit Shah said.

Amit Shah in Kolkata: 'CAA will give citizenship, not take away'

"You tell me, shouldn't Article 370 have been removed? Mamata Banerjee had protested against the move in Parliament. Our Prime Minister has removed all obstructions for Ram Temple," Amit Shah said.

"If you want to take Bengal on the path of development, you will have to fight against the injustice in Bengal. We won't allow dynasty rule in Bengal. Mamata says 'Didi Ke Bolo'. The people should tell her that they will not put up with any injustice anymore," Amit Shah said in Kolkata.

Amit Shah in Kolkata: 'Mamata can continue with her atrocities, people have seen her real face'

"This journey is not of the BJP but of the people of Bengal, to protest against poverty and bring an end to 'syndicates and toll bazi'. This journey is to provide citizenship to several people here. They had denied permission for my chopper earlier. False cases were registered against BJP workers. But Mamata di couldn't stop us. You can continue with your atrocities, the people of Bengal have now seen your real face. This rally is against the goons of TMC," Amit Shah said.

Amit Shah in Kolkata: 'BJP will next come to power in Bengal'

Addressing workers in Kolkata, Shah said, "BJP has won 18 out of 42 seats in Lok Sabha. I pay my respect to the great land of people. It is because of the great people of Bengal that Prime Minister Narendra Modi won the 2014 polls with a majority. Mamata should be careful - in the coming upcoming assembly elections, it is the BJP who will form the government here."

Amit Shah has begun addressing the crowd in Kolkata.

At a public meeting in Kolkata, West Bengal. #AarNoiAnnay https://t.co/XhUGYSySX1

BJP leaders have started addressing the workers and supporters at Shahid Minar Ground.

Amit Shah in Kolkata: Pains me to witness the politics of discrimination, says Mamata Banerjee

Today on @UN #ZeroDiscriminationDay, it pains me to witness the politics of discrimination being woven into the fabric of India. Let us pledge to uproot all forms of division based on caste, creed, and religion from our society. We will never stand for discrimination of any kind. Earlier in the day, Kolkata Mayor Firhad Hakim said, "In Assam, 19 lakh Bengalis are being driven out. Here, the people of Bengal will not allow CAA or NRC. The movement is being led by Mamata Banerjee. We are not worried about who comes and goes. We do not care if someone comes from outside and goes back."

Besides speaking on the Citizenship Amendment Act, Shah will also launch the Aar Noi Annay (no more injustice) movement to highlight and protest against the “injustice caused to the people of West Bengal by the Mamata Banerjee government”. 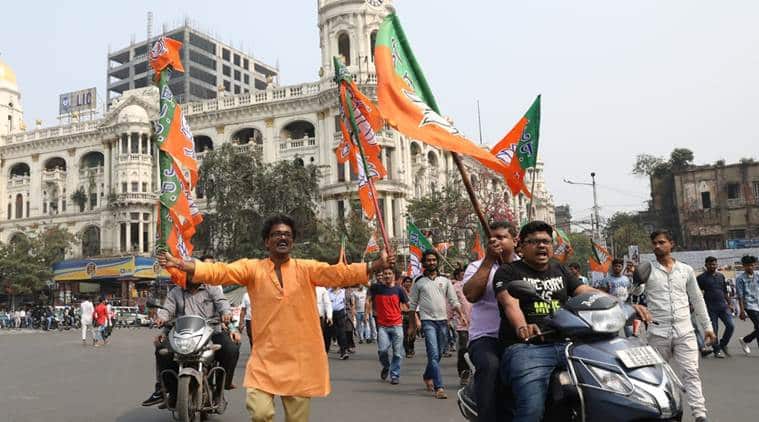 Speaking to The Sunday Express, BJP state secretary Sayantan Basu said, “Over one lakh people will attend the rally tomorrow. Our workers from the districts will come to Kolkata to hear Amit Shah-ji speak. CAA is a great Act brought in by Modi ji and Amit Shah ji. Tomorrow, the people of Bengal will thank them for that. They have understood the pain of Bengali refugees, who were forced out of Bangladesh. The Act not only recognised their plight, but also gave them respect in the country.”

On the Left's plans to take out a rally today, BJP national secretary Rahul Sinha said, “Everyone has the right to protest. CPM and Congress can also protest. But if they try to disrupt our rally, then we know how to tackle them.”

State Congress president Somen Mitra said, “This is a time when examinations are on. No political parties are allowed to hold rallies. But TMC is giving special treatment to BJP.”

The Kolkata Police had granted permission for Shah’s proposed rally in Central Kolkata on March 1 after days of dilly-dallying. Reacting to the development, senior TMC leader and Bengal Minister of State for Parliamentary Affairs, Tapas Ray, had said the BJP was “deliberately trying to make an issue out of a non-issue”. “They had applied (for the permission) on Thursday and expected that it would be given by Friday morning. This is absurd,” he said.