Ambedkar Jayanti HIGHLIGHTS: Babasaheb Ambedkar was the principal architect of our Constitution and a founding father of the Republic of India.

Ambedkar Jayanti HIGHLIGHTS: Bhimrao Ambedkar is remembered as “The Father of the Constitution of India” and the man who fought for the oppressed in the country.

Ambedkar Jayanti is celebrated on April 14 to mark the birth anniversary of Dalit icon Bhimrao Ramji Ambedkar, who is remembered as “The Father of the Constitution of India” and the man who fought for the oppressed. The nation commemorates his 127th birthday today.

Popularly known as Babasaheb, Ambedkar was an Indian jurist, economist, politician and social reformer who inspired the Dalit Buddhist Movement. He campaigned against social discrimination against untouchables and also supported the rights of women and labourers.

Keeping in view the recent vandalisation of Ambedkar statues in several places — the latest incident ocurred on Friday in Greater Noida — and also the violence which claimed the lives of nine people during protests by Dalit groups on April 2, the Uttar Pradesh government has tightened the security as a preventive measure.

Also Read | Ambedkar Jayanti 2018: All you need to know about ‘Architect of Indian Constitution’

Telangana Chief Minister K Chandrasekhar Rao and several other leaders also paid tributes to  Ambedkar in Hyderabad. Recalling the services rendered by Ambedkar, Rao said the architect of the Indian Constitution would always remain an inspiration to several generations. The chief minister said Ambedkar understood Indian society completely and paved way for the future and as such he would always remain as an inspiration to several generations, according to a release from the CM’s office.

Puducherry Chief Minister V Narayanasamy earlier in the paid floral tributes to B R Ambedkar on the occasion of his 127th birth anniversary. Ministers, legislators and Deputy speaker of Puduchery V P Sivakolundhu were among those who paid tributes.

The DMK has alleged that the BJP-led Centre was hampering B R Ambedkar's ideals behind the making of the Indian Constitution.

DMK's Working President M K Stalin said the Centre was working towards "weakening" social justice, without elaborating further. "The BJP-led Centre steered by Prime Minister Narendra Modi is working in a way (that is) hampering Ambedkar's ideals which led to the making of the Constitution," said Stalin.

After paying homage to Ambedkar on his birth anniversary here, the DMK leader appealed to his cadres and workers of 'friendly parties' to take a vow to "end such betrayal." 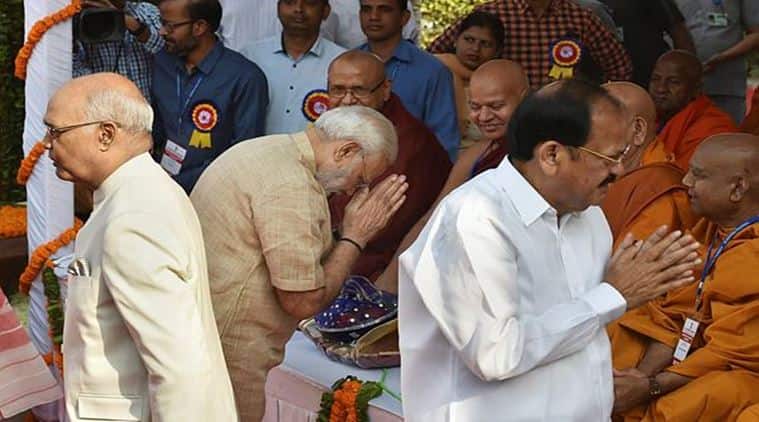 The Congress has accused the BJP of 'eroding' the legacy of Baba Saheb Ambedkar and said Prime Minister Narendra Modi was merely paying him lip service as his party and the RSS have an 'anti-Dalit mindset'. Congress leader Selja also charged the prime minister with doing politics over the legacy of the Dalit icon.

Maharashtra Chief Minister Devendra Fadnavis and other political leaders in the state paid tributes to B R Ambedkar on his 127th birth anniversary. Apart from political leaders, thousands of followers of Ambedkar visited Chaityabhoomi, Dr Ambedkar's memorial at Dadar in central Mumbai, to pay their respects.

'Our salutations to the father of Indian constitution Bharat Ratna, Mahamanav Dr Babasaheb Ambedkar on his birth anniversary today! It is because of him that every citizen of India can live a dignified life! His teachings and values of humanity will inspire generations to come,' Fadnavis tweeted.

It is because of the Constitution given to us by BharatRatna Dr Babasaheb Ambedkar, our nation is progressing at such speed and that too with inclusiveness!#SabkaSathSabkaVikas#AmbedkarJayanti pic.twitter.com/RB4f7sRPmJ

In a tweet, Adityanath said, 'Babasaheb has made a number of provisions in the Constitution of India to remove social disparities and provide social justice to the oppressed sections of the society...Every citizen of India will always remain obliged towards the contribution of Babasaheb.' 'Babasaheb struggled throughout his life for the rights of Dalits and oppressed sections of the society,' he added.

Before Gandhi's arrival, Jivraj Chauhan, general secretary of SC/ST cell of BJP's state unit, was also gheraoed by the Dalit members, who shouted slogans against him, forcing him to leave the venue.

"We told the police that since we had gathered there much before the BJP leaders came, it was our right to pay tributes first. However, police prevented us from garlanding the statue stating that as per the protocol, it was the mayor's right. This angered our members," Solanki said. "The statue and the atmosphere in the GEB circle area was polluted after the arrival of Gandhi and other BJP leaders. Therefore, we cleansed Ambedkar's statue with milk and water after it was garlanded by the BJP leaders," he added.

After Gandhi and other leaders garlanded the statue around 9 am and left the venue, the members of the community washed it with milk and water, saying the BJP leaders' presence had "polluted" the atmosphere.

The members of the Dalit community raised slogans at the GEB Circle area on Race Course against other party leaders and Gandhi, the Women and Child Development minister who is in the city to attend a number of events. She arrived at Ambedkar's statue along with BJP MP Ranjanben Bhatt, city mayor Bharat Dangar, BJP MLA Yogesh Patel and others. The members of the Dalit community, led by Solanki, started raising slogans against them. An argument broke out between them and the police personnel, but no untoward incident took place. 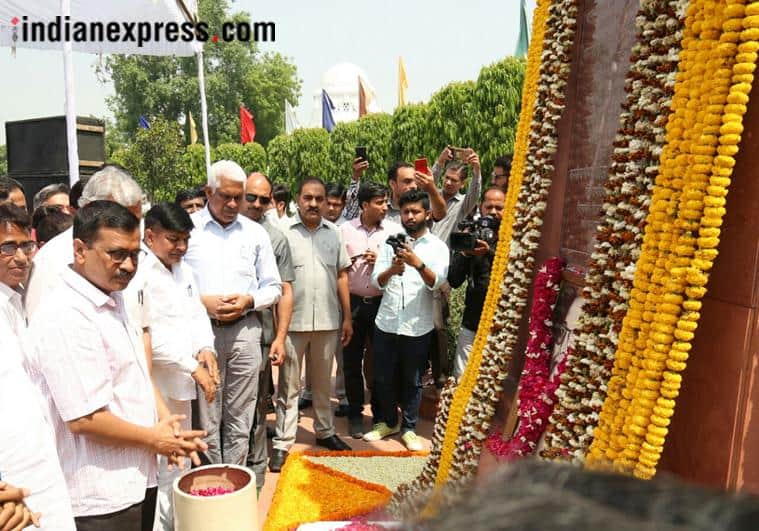 Prime Minister Narendra Modi arrived here today on a day's visit to inaugurate the 'Ayushman Bharat- National Health Protection Mission' and other development projects. The prime minister's visit to the state coincides with the birth anniversary of Dalit icon B R Ambedkar.

One of the protesters, Sabjeet Singh of the Shiromani Akali Dal Amritsar USA told PTI that Ambedkar's vision was to ensure equality for all communities, minorities and Dalits and he had enshrined this in the Indian Constitution. “But the BJP government that has come to power in India wants to build a Hindu nation. They are committing atrocities against Sikhs, Christians, Muslims, Dalits. We are here to peacefully convey the message on behalf of all the minority communities in India that Ambedkar's vision of equality remains unfulfilled,” he said.

As soon as Akbaruddin concluded his remarks, the group left the conference room. Outside the room, UN police and security personnel assembled and questioned the Sikhs, inspecting their posters and inquired about whether they had permission and valid passes to enter the UN. The Sikhs, belonging to the Shiromani Akali Dal Amritsar USA and Youth Akali Dal Amritsar USA, told the security personnel that they were protesting silently and peacefully.

As India's Permanent Representative to the UN Ambassador Syed Akbaruddin began his opening remarks at the event, a group of Sikhs stood up in the conference room and held up posters that read 'Minorities Under Threat' and 'Never Forget 84' alongside pictures of Ayodhya's Babri Masjid and the Golden Temple in Amritsar. Akbaruddin remained unperturbed by the protest and continued to deliver his speech. The Sikhs, about 15 in number, had tied black bands on their turbans and they stood silently for the entire duration of Akbaruddin's remarks, holding up the posters for the attendees to see.

Ambedkar Jayanti LIVE updates: Born on April 14, 1891, in the town and military cantonment of Mhow (now in Madhya Pradesh) to Ramji Maloji Sakpal and Bhimabai Murbadkar Sakpal, Ambedkar faced isolation in school because of his caste. He was born into the Mahar (Dalit) caste, which was treated as untouchables and subjected to socio-economic discrimination.

BR Ambedkar championed for the rights of the poor, downtrodden and lower caste people.