The Big Shift: No red light, I am not a VIP

Some say this is just for show but what AAP started is setting the trend. Amarinder switched red-lights off, others want to follow 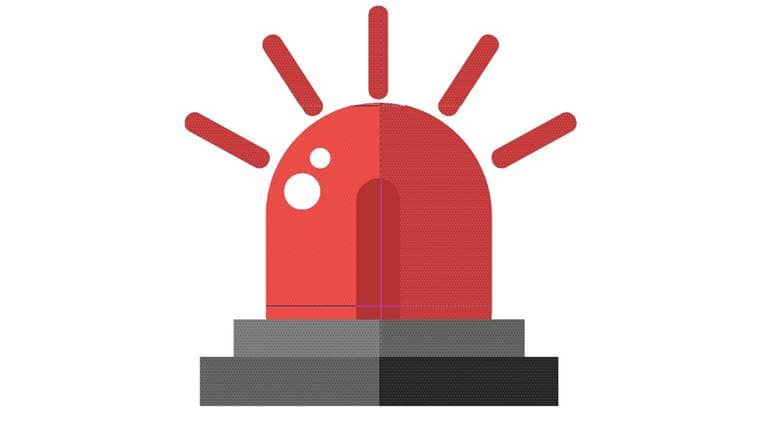 THE red beacon. Nowhere other than in India does that image evoke in equal parts awe, reverence, subordination, admiration, envy, aspiration — and yes, hatred. Those red, flashing lights on top of vehicles, popularly known as “lal battis”, that separate the haves from the have-nots, the must-have VVIP bling for which security barricades are rolled back, policemen snap to attention, traffic lights are ever green, and others must give way. Flashing, non-flashing, mostly red, but also blue or amber, these lights have come to symbolise the most visible trapping of power and authority — and a sense of entitlement, of the kind that saw a Shiv Sena MP brag about assaulting an Air India staffer in Delhi last week. Which is why the announcement by the new Congress government in Punjab — among its first — that it will do away with red beacon lights for all but a handful of its “high dignitaries” has sparked a buzz. The AAP government in Delhi was the first to declare war on red beacons in 2014, but the Congress move is being seen as “radical” change, perhaps because it is out of character for a party that embodies the status quo.

So much so, that the Amarinder Singh government’s move appears to have inspired others across the country. The new Chief Minister of Uttar Pradesh, Yogi Adityanath, has announced that he is doing away with red beacons in the BJP-ruled state. Congress leaders in other states, such as Odisha and Madhya Pradesh, are also sitting up and taking notice. In Bihar, Education Minister and Congress state president Ashok Choudhury has demanded that the government follow Punjab’s example, though the other two coalition partners, the JD(U) and the RJD, seem reluctant. Then there’s West Bengal, where TMC chief and Chief Minister Mamata Banerjee had already stopped using this symbol of power, followed by many of her ministers.

Punjab’s Finance Minister Manpreet Badal, who has spearheaded the move in his state, is emphatic that doing away with this powerful symbol is the first step in doing away with “VIP culture”. He not only does not use a red beacon — from the time he was the finance minister in the Akali government between 2007-10 — he also uses his own car at work. “To reclaim its lost glory, Punjab has to change, willingly if possible, kicking and screaming if required,” says Badal, the estranged nephew of the Shiromani Akali Dal leader Parkash Singh Badal and who quit SAD to form the People’s Party of Punjab and merged it with the Congress last year. Comparing the beacon move to surgery, the 55-year-old says, “When a patient is wheeled into the Operation Theatre, the first thing he gets is anaesthesia. Getting rid of red beacons is like giving the patient his first injections of anaesthesia.” 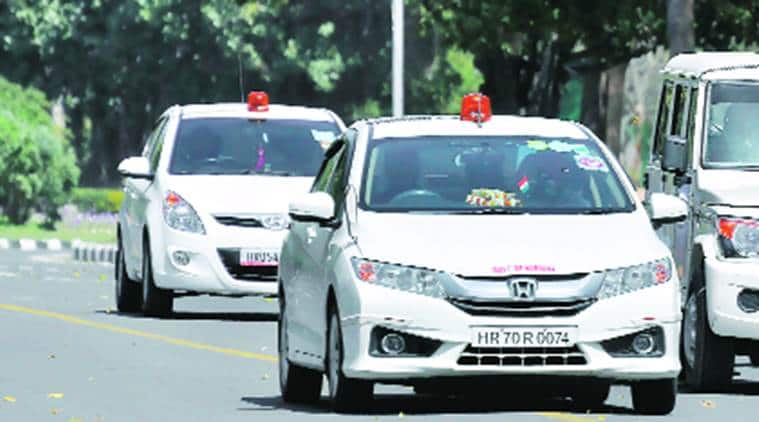 But then, not many are impressed – or convinced. “Removing red beacons is the easiest thing for a government to do. It is your typical low-hanging fruit. It allows a party or government to take a populist step that costs zero, politically or otherwise; it allows a new government to frame itself in public perception in a particular way without having to do anything substantive in terms of change,” said a senior official at the Centre. Sanjay Srivastava, a professor of Sociology at Institute of Economic Growth, Delhi, dismisses it as “a ruse, subterfuge” that does not change the “real structures of power” in the country. “It addresses a new constituency of ordinary person, who is essentially a middle-class person, who is not interested in structural change. He is entrenched in these structures of power and can access them easily. In fact, such change would be deeply offensive to the new ‘ordinary’ person who is different from the earlier common man, who was a farmer and essentially a poor person.

Removing red beacons changes nothing for that person,” says Srivastava. “Such moves serve to conceal contradictions, the inequalities that exist and will continue to exist,” said Parmod Kumar, director of the Chandigarh-based Institute of Development and Communication. “Does taking away the red beacon take away their power, the way they wield this power? No. They have accumulated security, they waste public resources, and then when they give it up, they make it sound like a sacrifice. Were they supposed to have all this in the first place?” he asks.

Then there’s this question: what about the other such symbols of power? “Doing away with lal batti is not doing away with lal-batti culture,” says Shreekant Gupta, professor of Economics at the Delhi School of Economics, who was beaten up by the security detail in the Delhi Lieutenant Governor’s convoy in 2000 for not giving way. “The VIP culture is obnoxious, but where it is really dangerous is on the road. Lal battis are a visible and pernicious manifestation of VIP culture. But the real question is this: even without the lal batti, do you still have a belligerent and menacing cavalcade that is shoving people off the road?” Gupta asks.

In Punjab under the Badals, SAD leaders at all levels, including the much hated halqa-in-charge, leaders of local bodies, even candidates who lost the Assembly elections, appropriated the red beacon. A policeman who stopped a car with a red beacon light did so at his own peril. The Congress will surely earn a few brownie points for doing away with it, although the government is yet to issue a notification on removing the beacons.

Ashutosh Kumar, who teaches political science at Panjab University, says the move is the combined result of the reformist zeal of Manpreet Badal, a “different kind of politician”, and the Delhi “AAP effect”. But he points to the other unchanged ways of the Congress. “Going by the appointments that Amarinder is making, the coterie is back around him. In 2002-07, it was this coterie that wouldn’t allow even an MLA to meet their Chief Minister. One can only hope it won’t be a repeat of the last time,” he said.

How SC showed the way

It was the Supreme Court of India that first began the debate on “VIP culture”, including red and blue beacon lights of the flashing and non-flashing varieties back in 2010. In response to a question that rose out of another case relating to the granting of Z security to a UP politician, the court began examining if red beacons violated the constitutional principle of equality. Later, this cause got public traction during the Anna Hazare-led dharnas in Delhi. In a judgment in December 2013, around the same time as AAP was first elected in Delhi, the apex court observed that the system was “reflective of the ‘Raj Mentality’ and is [the] antithesis of the concept of a Republic.”

The court drew up a restricted list of the use of red beacons to those who hold constitutional office, and blue lights for emergency and ambulance services, and others on duty, including police and uniformed officials. State governments were asked to frame the rules to implement the court’s order. The implementation, as expected, was half-hearted. In Punjab, the government’s move is already facing resistance from ministers and MLAs. “We worked very hard for it for many years, and now you say remove it. What about security issues?” asked Rana Gurjit Sodhi, Punjab’s wealthiest MLA, and Minister of Irrigation and Power.

Another MLA, Sukhpal Singh Bhullar, says he will continue to use it because those who voted for him want to see him in a car with the red beacon. Meanwhile, in neighbouring Haryana, Ambala-based RTI activist and advocate Hemant Kumar, whose activism was instrumental in the pruning of beacon use in the Union Territory of Chandigarh, says it is time the Khattar government followed suit. After the Supreme Court order, the Haryana government generously disbursed blue beacons, which was left to the discretion of the government; and, permitted the wide use of flashing amber lights, normally meant for use only in airports and dockyards. “The Supreme Court took a great step. Now the whole country should emulate Punjab. These beacon lights have no place in a democratic country,” says Kumar.

Most states allow all ministers and top officers to use red beacons on their vehicles. But there are some notable exceptions – and deviations:

The Delhi govt was the first to remove red beacons from the vehicles of ministers. From 2014, only the Lt Governor, and the High Court’s CJI and judges can use red beacons with flashers. The Army’s General Officer Commanding (Delhi Area) can use a red beacon without flasher. As for the category of significant people with stature equivalent to those allowed the red beacons, only ‘specified high dignitaries’ can use them and that too, when on duty.

All ministers and judges are allowed to use beacons on their vehicles. Among bureaucrats, the list includes the chief secretary, home secretary, transport secretary, general administration Secretary, chief electoral officer and state election commissioner. But last October, Chief Minister Vijay Rupani directed traffic police to not halt regular traffic to allow his convoy to pass.

While cutting down the red beacon category, the state has for the first time allowed the use of blue beacons with flashers for officials entrusted with law and order and other emergency services; secretaries; police officers of the DG and IG ranks; and corporation mayors. The head of the state human rights panel and vice-chancellors of universities can use blue lights without flashers. But Chief Minister Mamata Banerjee does not use any light on her car – an example that has been followed by several ministers.

Red beacons are allowed for all ministers and VVIPs but the newly purchased convoys of Telangana CM K Chandrasekhara Rao and Andhra Pradesh CM N Chandrababu Naidu do not sport any beacons – as yet. Although they are not exempted from paying toll tax, most vehicles having blue or red beacons flash the lights to avoid paying.

Apart from red beacons for VVIPs, amber lights without flashers are allowed on the vehicles of the additional chief secretary, principal secretary, secretary-level officers, DGP, and police officers of DG-rank. The state rules specify that red lights can be used only when on duty, but this clause does not apply to those allowed amber lights.

Ministers, the speaker, and High Court judges are allowed to use red beacons – and police officials and other bureaucrats who were using blue beacons.

Lights on vehicles of all VVIPs shall be covered with a black cover when they are not occupying the vehicle or are not on duty.