Ratnagiri had four active COVID-19 cases Sunday. For the mango trade, that fuels the economy of Maharashtra’s coastal districts, the lockdown is a second blow in close succession, after the untimely rain in December costing 40 per cent of the yield. Workers weigh and segregate Alphonso mangoes as per grade at a warehouse owned by Sanchin Lanjekar in Ratnagiri. (Express photo by Amit Chakravarty)

Every summer, said Devdutta Patil, customers wait for the Alphonso. This year, for the first time that he has been in the mango business for 30 years, it is the king of fruits that is waiting for buyers.

On Sunday night, his son Vikram Patil supervised the packing of 72 boxes containing two dozen mangoes each at their sea-side home in Ratnagiri, for their first dispatch to Mumbai this season, with some easing of the lockdown starting the next day. As four workers and members of the family placed the Alphonso, or Hapus as it is called locally, in layers of hay, Vikram said the boxes were headed for the APMC market in Vashi, Navi Mumbai, about 340 km away. Their agents had called up to inform that the market was re-opening, he said.

Still, he doesn’t expect to come anywhere close to their usual sales of from their about 800 mango trees from two orchards in Mirya and Malgund in Ratnagiri district. “We are readying about 1,000 boxes, last year we sold 2,500,” Vikram said, adding that usually, they start readying their produce by February.

Ratnagiri had four active COVID-19 cases Sunday. For the mango trade, that fuels the economy of Maharashtra’s coastal districts, the lockdown is a second blow in close succession, after the untimely rain in December costing 40 per cent of the yield. 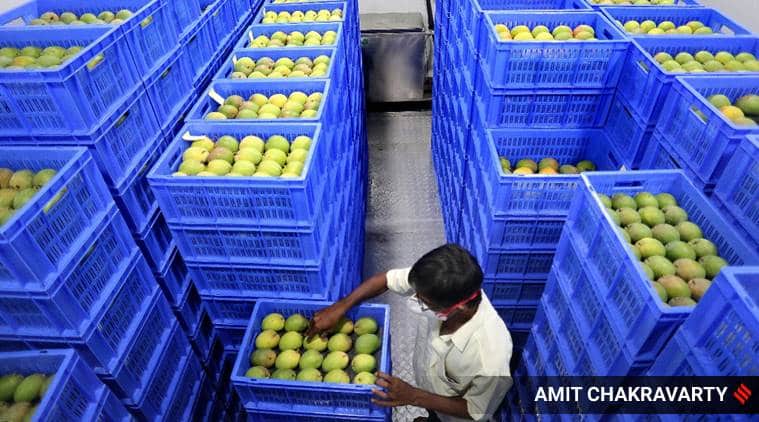 For the mango trade, that fuels the economy of Maharashtra’s coastal districts, the lockdown is a second blow in close succession.

An estimated 30,000 to 40,000 metric tonnes of top-grade mangoes from Konkan are exported every year, to Europe, the Gulf, Australia, Japan and the US among other markets. However, the demand from the overseas market also diminished in the wake of the global pandemic this year.

The Konkan region’s other mainstays, cashew and tourism, are also hit, in what are their most lucrative months, of March, April and May.

Amid the lockdown, mango farmers reached out to the government to facilitate the retail sale of Alphonso in districts including major markets like Mumbai, Thane and Pune. 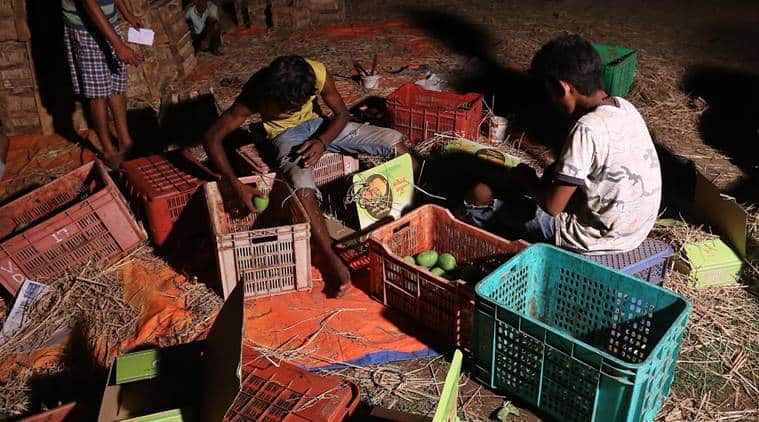 Recently, mango farmers reached out to the government to facilitate the retail sale of Alphonso.

While Alphonso rates, in the range of Rs 800 to Rs 2,000 for a peti (box of four to seven dozen mangoes), are not dramatically lower than earlier, problems in supply chains have made the business sluggish, said Bhide. “Usually by April 20, most farmers have sold 50 per cent of their produce,” he said.

Amar Desai, a third-generation mango farmer, said that not just the fresh fruit, with its short shelf life, but also the mango processing business has been affected. A number of small and micro-entrepreneurs in Ratnagiri trade in mango products like sweets, pulp and bottled juice, pointed out Desai, whose grandfather set up the famous mango shop Desaibandhu Ambewale in Pune in 1932.

Umesh Lanjekar, the proprietor of Anish Farms in Ratnagiri, was the first in Konkan to procure an X-ray machine to detect spongy tissue in the mango, a ripening disorder in the Alphonso, and ensures only good quality mangoes are processed further. Lanjekar, who runs a mechanised facility that helps increase the mango’s shelf life and exports mangoes to countries including USA and Germany, said that due to Section 144 over one-and-a-half months of the lockdown, they could not have more than four workers in their fields at a time, against 20 usually.

“Though the administration issued passes for trucks to take the product to Mumbai, forwarding agents were not available to do the paperwork for exports,” added Lanjekar, after loading boxes of mangoes in a truck going to Satara on Sunday.

Sunil Pawar, the managing director of the Maharashtra State Agricultural Marketing Board (MSAMB), said that they have started to directly link farmers with consumers in urban areas now. The board has a list of mango farmers ready for this up on their website. “We have also started sending vehicles to districts like Satara, Nashik, Sangli and Kolhapur for farmers to sell to consumers there,” he said.

Pawar said around 300 tonnes of mangoes have been sent to buyers in other cities via the Board’s intervention, while around 2,235 tonnes have left for markets abroad, mainly the Middle East, from its Vashi treatment centre.

“Similar interventions are being carried out by the Agriculture Department as well as other organisations like the Konkan Vikas Sanstha. Some of the wholesale traders have even tied up with food delivery applications like Zomato to home deliver mangoes,” he said. 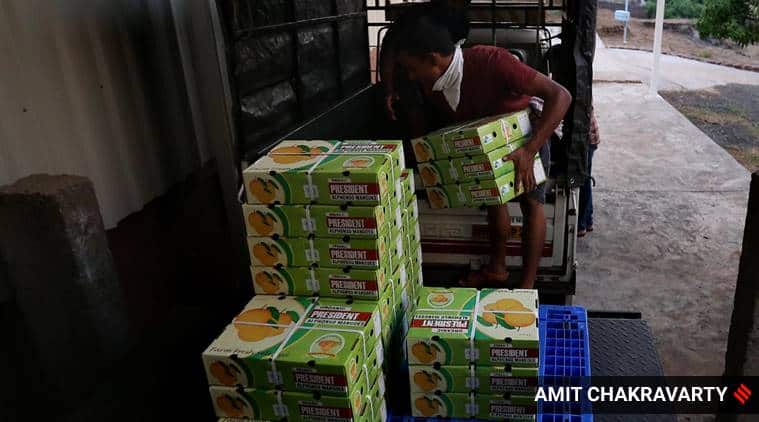 An estimated 30,000 to 40,000 metric tonnes of top-grade mangoes from Konkan are exported every year.

Last week, Konkan Bhumi Pratishthan, an NGO associated with around a thousand mango farmers that works with the state government, stepped in to enable farmers to reach their urban customers. Founder Sanjay Yadavrao said that Alphonso sale may drop to Rs 1,000 crore as opposed to Rs 3,000 crore registered last year. “We started via social media. Now the demand is so high, we are trying hard to fulfill it. We are planning to launch an App next week.” So far, they have sold 10,000 dozen mangoes to 100 housing societies in Mumbai, Thane, Vasai and Pune through their online portals.

Amar Desai fears the pinch may be felt the most ahead of the next harvest. “Whatever the farmer earns during March, April, May is what sustains him for the year. He uses it in October-November for his next harvest.”

While the rates of the Alphonso have been in the range of Rs 800 to Rs 2,000 for a peti (box of four to seven dozen mangoes) are not dramatically lower than what they are every year, mango farmers said with the supply chains hit during the lockdown, the business this year lacked momentum.

– With inputs from Partha Sarathi Biswas in Pune