Kailash Vijayvargiya's statements drew sharp reaction from BJP MP Varun Gandhi who slammed the comment as an invitation to an Indian soldier to do “chowkidari of a political office”. 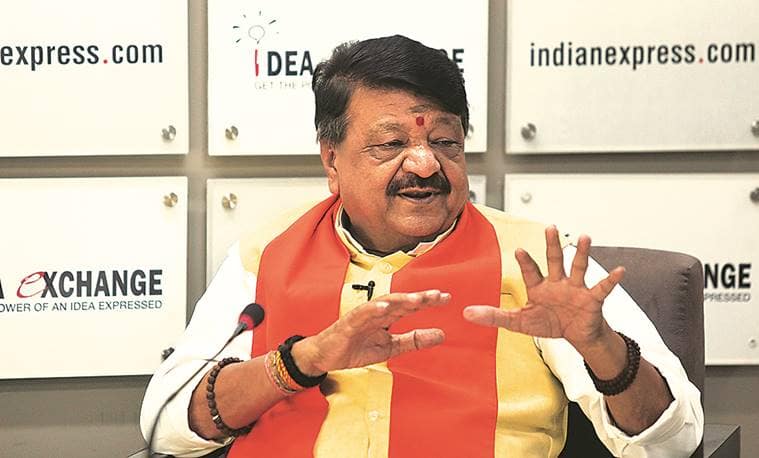 Kailash Vijayvargiya was speaking at a press conference organised ahead of the upcoming local body elections in the state when he was asked about the violent protests across the nation demanding the rollback of the Centre's Agnipath scheme. (File Photo)

BJP national general secretary Kailash Vijayvargiya said Sunday that if he had to hire a guard for his party office in Indore, he would prefer to hire an Agniveer. After the comment was met with swift criticism, including from his party MP Varun Gandhi, he sought to clarify the statement and shifted the blame to the “toolkit gang”.

Vijayvargiya was speaking at a press conference organised ahead of the upcoming local body elections in the state when he was asked about the violent protests across the nation demanding the rollback of the Centre’s Agnipath scheme. The BJP leader said the scheme promises several benefits for those who are not retained in service after four years.

#WATCH | I will give preference to an Agniveer to hire him as security in BJP office, even you can…People have faith in armymen: BJP National General Secretary Kailash Vijayvargiya in Indore, Madhya Pradesh pic.twitter.com/6NQoXw2nFv

“Discipline and obeying orders are key in the armed forces… Assuming that he (Agniveer) joins the armed forces at the age of 21, he will still be 25 by the time he leaves the force. He will have Rs 11 lakh cash in his hand. He will also be displaying the Agniveer medal on his chest.”

“If I have to hire someone for the security for the BJP office here, I will give a preference to an ‘Agniveer’,” he added.

Vijayvargiya’s statements drew sharp reaction from BJP MP Varun Gandhi. Taking to Twitter, Gandhi said, “The great army, whose heroic tales even the whole of dictionary is insufficient to tell, whose valor resonates in the whole world; an invitation to that Indian soldier to do ‘Chowkidari’ of a political office, congratulations to the person who gave it.” He added, “Indian Army is a medium of service to Mother Bharati, not just a ‘job’.”

Soon after, Vijayvargiya accused the ‘toolkit gang’ of trying to distort his statement and insult the workers of the country. “What I clearly meant was: Agniveer who came out of the Agnipath Yojana will definitely be trained and committed to duty, his excellence will be utilised in whatever field he will go after completing his service in the Army,” he said. “The nation is well aware of the conspiracies of this toolkit gang against the national heroes,” Vijayvargiya added.

Yuvraj Singh-Hazel Keech share first photos of son Orion, cricketer says ‘will not be like my dad Yograj who…’