After Jagan Reddy letter to CJI: Need free judiciary, it is for a judge to withstand pressure, says Justice Ramana

The remarks come a week after Jagan Mohan Reddy’s Principal Advisor Ajeya Kallam released to the media the CM’s October 6 letter to the CJI, alleging that Justice Ramana “has been influencing the sittings of the (Andhra Pradesh) High Court including the roster of few Honourable Judges”. 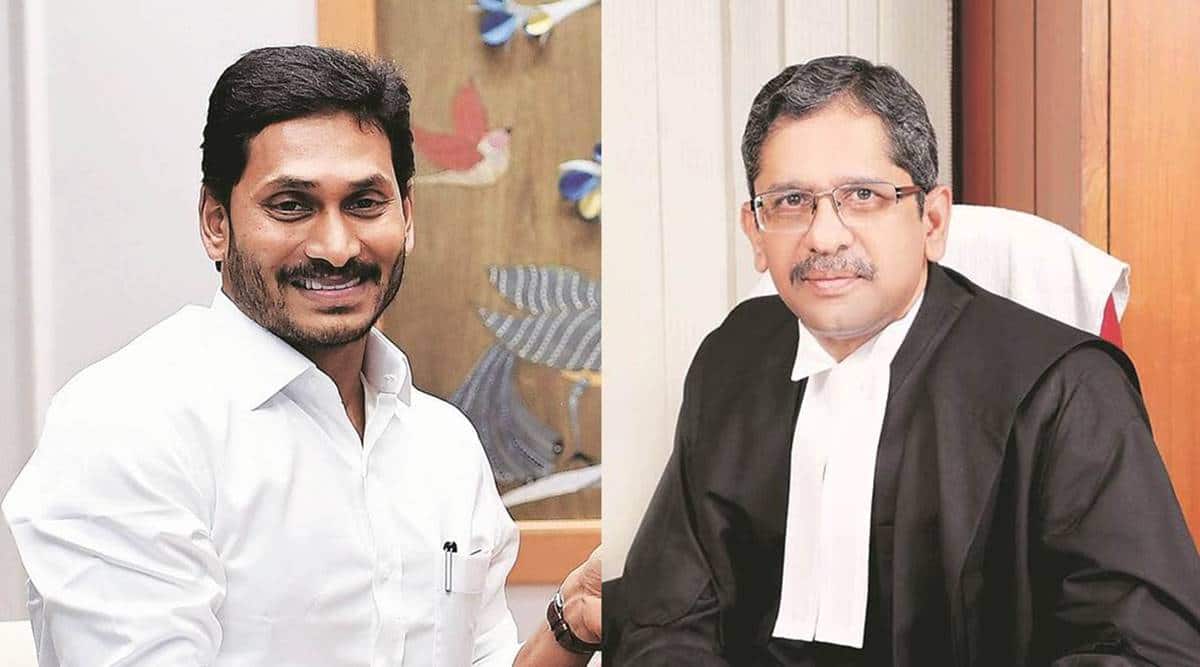 Days after Andhra Pradesh Chief Minister Y S Jagan Mohan Reddy’s letter to Chief Justice of India S A Bobde raised allegations of impropriety against him, Justice N V Ramana said Saturday “it is an important quality for a judge to withstand all pressures and odds and to stand up bravely against all obstacles” and that a “vibrant and independent judiciary… is required in the current times”. Speaking at a condolence meeting for former Supreme Court judge Justice A R Lakshmanan who passed away on August 27, Justice Ramana, next in line to be the CJI, said: “There are innumerable qualities that a person needs to live what can be called a good life: humility, patience, kindness, a strong work ethic and the enthusiasm to constantly learn and improve oneself.”

“Most importantly, particularly for a judge, one must be steadfast in holding on to principles and be fearless in decisions. It is an important quality for a judge to withstand all pressures and odds and to stand up bravely against all obstacles,” he said.

The remarks come a week after Jagan Mohan Reddy’s Principal Advisor Ajeya Kallam released to the media the CM’s October 6 letter to the CJI, alleging that Justice Ramana “has been influencing the sittings of the (Andhra Pradesh) High Court including the roster of few Honourable Judges”. The letter alleged judicial impropriety on the part of Justice Ramana and raised questions on certain land transactions allegedly involving members of his family.

Reddy’s letter to the CJI came at a time when he faces rising legal heat. The bench headed by Justice Ramana is hearing a petition by lawyer Ashwini Upadhyay, seeking fast-tracking of pending criminal cases against sitting and former legislators.

It was after an order by this bench that proceedings against Reddy, in a disproportionate assets case, resumed in a CBI Special Court in Hyderabad on October 9. The very next day, Kallam, Reddy’s Principal Advisor, made public the CM’s letter to the CJI.

Speaking at the meeting Saturday, Justice Ramana recalled what a saint said about the contemporary significance of Lord Rama.

“So people worship Rama not because of the success in his life, but for the gracefulness with which he conducted the most difficult moments. That is what is valued; that is the highest value in one’s life.”

“It is not the question of how much you have, what you did, what happened or what did not happen. Whatever happened, how did you conduct yourself? That is what determines the quality of who you are,” he quoted the saint.

“Our values are ultimately our greatest wealth, and we must never forget the same. Justice Lakshmanan wore his values on his sleeve, and I learnt immensely from him, about being a good person and a judge,” Justice Ramana said.

He recalled that Justice Lakshmanan had said “we, the members of the judicial hierarchy, have inherited the legacy of a dedicated, collective endeavour by the Bench and Bar in establishing an unbroken tradition of high efficiency, perfect integrity and fearless independence”.

“We as judges must remember and cherish” it and “we should all take inspiration from his words, and should strive to commit a vibrant and independent judiciary which is required in the current times,” he said.

“The greatest strength of the judiciary is the faith of the people in it” and that “faith, confidence and acceptability cannot be commanded, they have to be earned,” he said.

Meanwhile, the Executive Committee of the Supreme Court Bar Association (SCBA), in a resolution, “strongly condemned the action of the… Chief Minister of Andhra Pradesh in releasing his letter” to the CJI “making allegations against Justice Ramana… in the public domain”.

“Such actions by constitutional functionaries”, the SCBA said, “are opposed to conventions causing serious inroads impacting the independence of the judiciary as enshrined in the Constitution of India.”

However, SCBA President Dushyant Dave, it is learnt, opposed the resolution, saying only an inquiry into the allegations, if it is held, can establish whether the allegations against the judge are true or false, and passing a resolution at this stage is premature.

Proposal to Indian Army: Cut ceremonies, canteen for better use of resources