After Assam-Meghalaya border violence, dark shadows in a village down the road

Last week, Mukroh, on Meghayala’s border, was thrust into the spotlight when a clash with Assam authorities led to the deaths of five villagers. ‘Others take this road too, but we suffer,’ they say 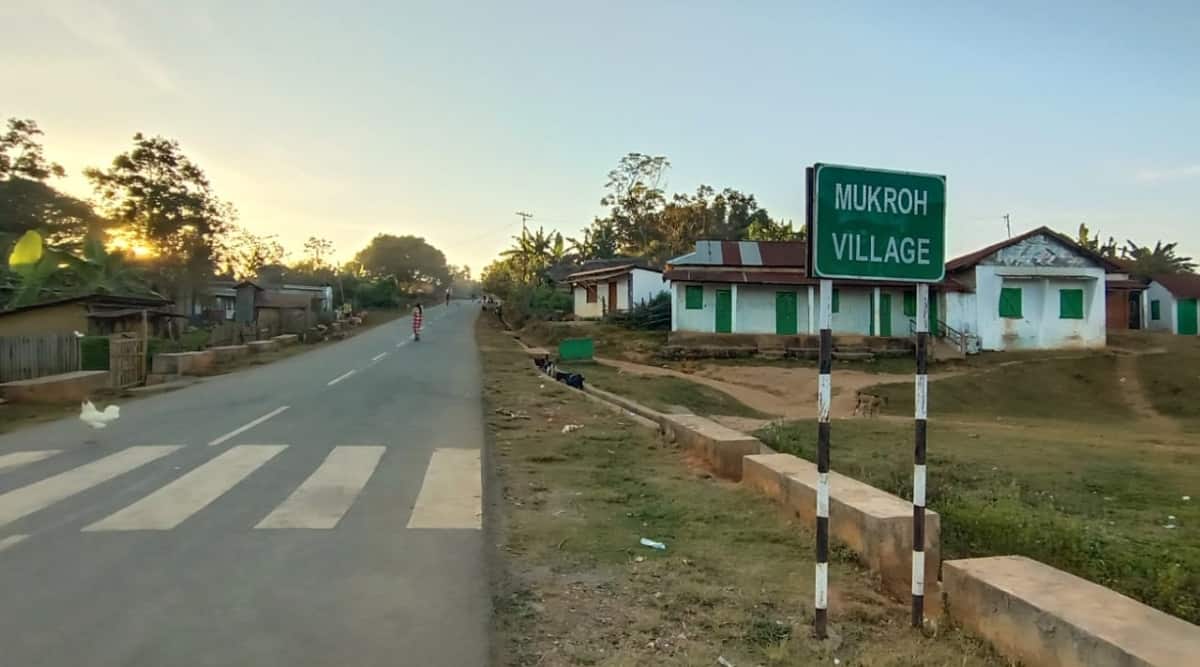 The road that cuts through Mukhroh village goes right up to the border. Picture by Debraj Deb

It’s 3 pm on Wednesday and the shadows have already started to lengthen on the road. Personnel of the Meghalaya Police holding automatic rifles patrol the all-weather road that goes all the way to the district headquarters of Jowai.

It’s here, on this road that cuts through Mukroh, a village in Meghayala’s West Jaintia Hills district, that a team of the Assam Police and forest personnel clashed with villagers early morning on November 22, leaving five of them dead. Also among the dead was a Assam forest guard. The incident thrust Mukroh, which sits on the border with Assam, into the uneasy glare of the spotlight and made it the centre of the latest flashpoint between the two states.

Also read |What is the Assam-Meghalaya border dispute, how the recent killing of six people impacts it

Perched atop the lush green hills of Laskein block, Mukroh has about 545 households with a population of around 4,000. Most of the residents are farmers who work on community fields located outside the village. The paddy farms overlook the inter-state boundary, where Assam has a small forest camp. Meghalaya, however, has no camp or check post on its side and a small team of the Meghalaya Police maintain vigil on this fragile boundary.

While the Assam authorities say Tuesday’s incident was over an alleged timber smuggling bid and that they chased down a vehicle with the contraband, villagers allege that they were on their way back from their community paddy fields, around 1 am, their vehicle loaded with 3-4 sacks of rice and some fodder, when they were allegedly waylaid by the police.

“Around 3 am, as we were nearing our village, the Assam Police stopped us and pulled me and the others out of the vehicle. The policemen tortured us and thrashed us at a police outpost, calling us smugglers,” says Budky Sumer, 23, one of the farmers from Mukroh, whose arrest, as alleged by the villagers, led to the standoff and the police firing.

Security personnel at a vandalised forest office in West Karbi Anglong district on Wednesday, day after the killings near the Assam-Meghalaya border. PTI

Villagers claim all those who died in the clash — Thal Shadap, 60, Sik Talang, 53, Shirup Sumer, 39, Tal Nartyang, 42 and NIkasi Dhar, 60 — were not protesters, but “simple farmers” on their way to their fields.

At her tin-roofed house in Mukroh, Thal’s wife Skhem Sten, 43, says, “We left our house at 7 am to work in the fields. Suddenly, we heard gunshots and we got separated. I hid in a nearby forest. After half-an-hour, I came out and saw my husband lying in a pool of blood.”

Mukroh village head Hamboide Sumer says, “Farmers from the village are falsely accused of being smugglers, whenever the authorities can’t find anyone or when villagers refuse to pay taxes to forest personnel. The problem is worse during the paddy harvest season, when a lot of us move between the community farms and the village.”

Though Assam and Meghalaya share a 884-long, inter-state border, with both states in talks over resolving a long-pending border dispute at 12 locations, sources say Mukroh doesn’t fall under any of the disputed areas.

However, on Tuesday, soon after the firing, Assam issued a statement, claiming the incident took place “at Mukhrow under Jirikinding PS under (Assam’s) West Karbi Anglong district”.

Meghalaya Deputy Commissioner of West Jaintia Hills district, Batlang Samuel, contested Assam’s claims and said Mukroh is “well within Meghalaya”, under the jurisdiction of the state’s Nartyang police station. He said Block-I, which is a part of the disputed areas between the two states, is, in fact, further from the village.

The initial flutter caused by Assam’s claims of Mukroh being inside its jurisdiction was put to rest when Chief Minister Himanta Biswa Sarma called the incident a “conflict between Assam Police and the people of a village in Meghalaya”.

Despite not being part of the disputed area, Mukroh and its villagers say they bear the brunt of the boundary disputes — they talk of other incidents of alleged firing and of authorities chasing vehicles down the road. “Such incidents are not uncommon here. The road through Mukroh also connects several other nearby villages — Chanongthmymei, Arbong Phlang, Deinler and others. But because we are so close to the forest camp, we are the ones to suffer,” says village chairman Deibormi Lamin.

Back at her home, Skhem Sten says her husband’s death brought home another painful memory — of 20 years ago, when her brother Dia Sten was killed, allegedly by militants.

“I have seen two of my own getting killed. The farmlands we work in are not our own; we are labourers. My elder son is a daily-wage worker but he hardly gets any work here. I don’t know what to do. I am hopeless,” says Skhem, who worries for her five children, the youngest seven years old.