2G case verdict: CBI court acquits A Raja, Kanimozhi and all other accused

2G case verdict: The trial in the case started six years ago after the Comptroller and Auditor General exposed in 2010 that 122 2G licences had been given to telecom operators at throwaway prices without a free and fair bidding process, causing a loss of Rs 1.76 lakh crore 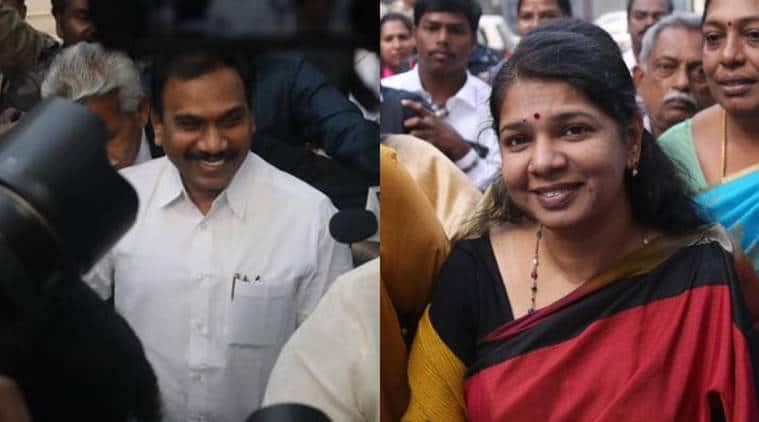 A Raja and Kanimozhi arrive at the court in Delhi on Thursday. (Express photo)

A special CBI court on Thursday acquitted former telecom minister A Raja, DMK supremo Karunanidhi’s daughter Kanimozhi and other accused of all charges in the 2G spectrum allocation cases — famously known as  2G ‘scam’ and often described as the biggest corruption scandal in India. All the acquitted in the case have to, however, furnish a bail bond of Rs 5 lakh each to ensure their presence in a higher appellate court if the verdict is challenged.

The alleged scam came to light in 2010 when the then Comptroller and Auditor General Vinod Rai alleged that 122 2G licences were given to telecom operators at throwaway prices without a free and fair bidding process, causing a loss of Rs 1.76 lakh crore to the national exchequer. The trial in the case began next year.

The licences were scrapped by the Supreme Court on February 2, 2012.

In a strongly worded judgment, Special Judge OP Saini castigated the CBI for ”misreading” the case. “There is no evidence on the record produced before the Court indicating any criminality in the acts allegedly committed by the accused persons,” he said. “The chargesheet of the instant case is based mainly on misreading, selective reading, non-reading and out of context reading of the official record,” Saini said.

Flagging factually incorrect facts in the chargesheet, the special judge pointed to two instances – the then Finance Secretary strongly recommending revision of the entry fee and deletion of a clause of the draft Letters of Intent by A Raja.

Meanwhile, an embarrassed CBI said it would file an appeal against the verdict. “Today’s judgment has been prima facie examined and it appears that evidence adduced to substantiate charges by the prosecution has not been appreciated in its proper perspective by the learned court. CBI will be taking necessary legal remedies in the matter,” CBI said.

Former PM Manmohan Singh, who was accused of staying silent on the case, said, “The court judgment has to be respected. I’m glad that the court has pronounced that the massive propaganda against UPA was without any foundation.”

A Raja, who was the Minister for Communications and IT in the UPA government, was identified by the CBI as the main accused. The agency had alleged that Raja asked for a cut-off date for applications of 2G licences, even though “no such cap” was recommended by TRAI, to favour certain companies. For this, CBI alleged Raja entered into a criminal conspiracy with his private secretary R K Chandolia, Unitech MD Sanjay Chandra and DB Group officials Shahid Balwa and Vinod Goenka. The telecom department proposed October 10, 2007 as the cut-off date, but Raja, first, brought it forward to October 1, and then to September 25, allegedly after Chandolia was informed that Unitech had applied on September 24.

Saying there was no material on record to prove that Raja was the “mother lode of conspiracy” in the case, the court said, “There is also no evidence of his no-holds-barred immersion in any wrongdoing, conspiracy or corruption.” 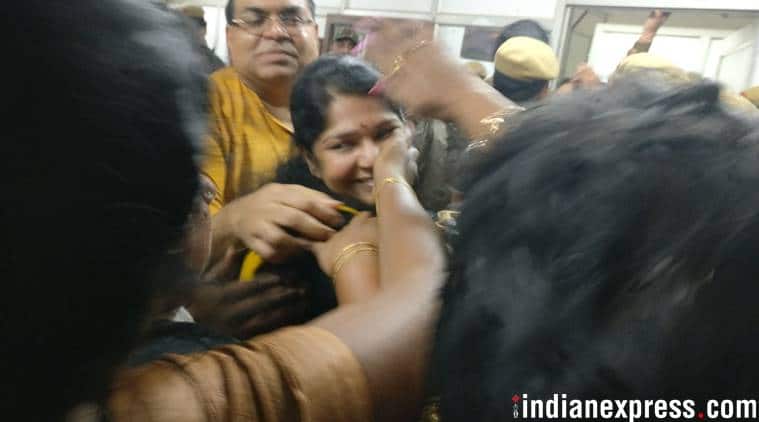 Raja has always maintained that “every decision” taken by him was “defended by the Manmohan Singh-led UPA government”. “The UPA government and the PM continued to support these decisions in Parliament,” Raja’s counsel had said.

The CBI also filed a second chargesheet in the case, accusing Essar of using Loop Telecom as a “front” to secure 2G licences in 2008, thereby cheating the telecom department. Apart from Essar and Loop Telecom, other companies named in the chargesheet were Saraf, Loop Mobile India Ltd and Essar Tele Holding Ltd (ETHL).

READ THIS STORY IN TAMIL HERE

Later, the Enforcement Directorate (ED) had filed a chargesheet against Raja, DMK supremo Karunanidhi’s daughter Kanimozhi and others for money laundering. The ED had alleged that Rs 200 crore was paid by Swan Telecom Pvt Ltd (STPL) promoters to DMK-run Kalaignar TV and listed 19 accused in its charge sheet in April 2014. Karunanidhi’s wife Dayalu Ammal was also named in the chargesheet. 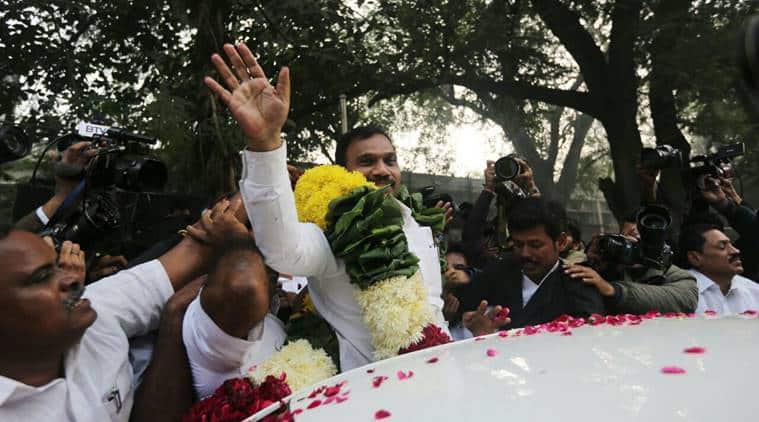 A Raja greets supporters as he leaves the Patiala house court after being acquitted in the 2G case. (Express Photo by Tashi Tobgyal)

In her defence, Kanimozhi had argued that she was the director of Kalaignar TV for only two weeks, from June 6 to June 20, 2007, and was not involved in the scandal.

“Congress leaders are treating this judgment as some kind of a badge of honour and a certification that it was an honest policy. In 2007-08, the spectrum licences was given not through any auction and market rates of 2001 were followed. Per licence fee was Rs 1,734 crore. Each and every case of spectrum allocation was quashed by SC (in 2012) as arbitrary and unfair. The policy was quashed as unfair and intended to cause loss to government. The cut-off date was advanced and the first-come-first-served policy was intended to favour a few companies. It was later changed to first-come-first-pay policy,” said Finance Minister Arun Jaitley.

BJP leader Subramanian Swamy, who was one of the PIL petitioners on which the Supreme Court had ordered CBI probe into the case, said the government must file appeals in the Delhi High Court against the acquittals.

“This is not a setback at all, its an aberration as the law officers were not serious on fighting against corruption. So I hope the PM takes lesson from this. We must now fight corruption on war footing,” Swamy was quoted as saying by ANI.

The court decision will certainly have political ramifications. The verdict comes at a time when the DMK is trying to gain a foothold in Tamil Nadu following the death of Jayalalithaa and split in AIADMK. Senior DMK leader Durai Murugan said the case against A Raja and Kanimozhi had political motives. “Victory begins now. With political motives, this case was put in us. Conspiracies were hatched against us, but all have been blown away now,” Murugan said.

Meanwhile, Congress spokesperson Tom Vadakan demanded the prosecution of former CAG Vinod Rai and called the 2G verdict a black mark in the history of the corruption watchdog. “A blind man can see. You know the CAG chief is today one of the strong advisers of the government, posted on various boards and organisations and is being rewarded for what he has done. He (Vinod Rai) should be prosecuted by the law of the land for creating such kind of excuses and cover-ups,” Vadakan said.

Batsmen know I can bowl at 150, hit them in the head, says Dale Steyn