2G spectrum case verdict: The ‘loss’ and the ‘cost’

According to various methods, the presumptive loss in the spectrum allocation was in the range of Rs 58,000 crore and Rs 1.76 lakh crore. 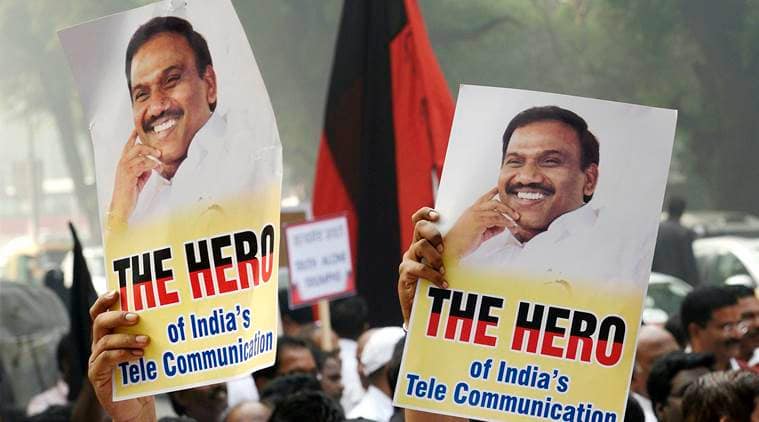 Supporters of former telecom minister A Raja celebrate his acquittal by a special court in the 2G scam case in New Delhi on Thursday. (PTI Photo)

A Special CBI Court Thursday acquitted all accused in the 2G spectrum case, including former telecom minister A Raja and DMK Rajya Sabha MP Kanimozhi. On the presumptive loss to the exchequer in the grant of 2G licences, Special judge O P Saini said “some people created a scam by artfully arranging a few selected facts and exaggerating things beyond recognition to astronomical levels” and “a huge scam was seen by everyone where there was none”.

* Based on foreign investments received by Swan Telecom and Unitech after they bagged licences, the report calculated a loss of around Rs 58,000 crore to Rs 68,000 crore.

“Many of the new UAS licensees of 2008 have been able to attract substantial amount of Foreign Direct Investment (FDI). Value of a new company with no experience in the telecom sector can primarily be taken as that of the license and access to spectrum… Based on this indicator, value of a pan India license works out between Rs 7,758 crore and Rs 9,100 crore as against Rs 1,658 crore priced by DoT,” the CAG report said.

* Based on prices offered by S Tel at Rs 13,752 crore each for new UAS license and Dual Technology license, CAG calculated loss of Rs 67,364 crore. In addition, it calculated the price of extra spectrum beyond contracted quantity of 6.2 Mhz.

* The figure of Rs 1.76 lakh crore was based on auction prices of 3G spectrum in addition to prices for dual technology and additional spectrum granted to operators.

“If price is calculated at 3G rates which can also be taken as one of the indicators for assessing the value of 2G spectrum allocated to UAS licensees in 2008, the value works out to Rs 1,11,512 crore against Rs 9,014 crore realised by DoT,” the CAG said. To this it further added prices for dual technology and extra spectrum to reach the figure of Rs 1.76 lakh crore.

“The material produced before the Court shows that the Minister of C&IT wanted to favour some companies at the cost of the Public Exchequer… The manner in which the exercise for grant of LoIs (letters of intent) to the applicants was conducted on 10.1.2008 leaves no room for doubt that everything was stage managed to favour those who were able to know in advance change in the implementation of the first-come-first served principle.”

“Surprisingly the TRAI recommendations were cherry-picked and were not considered in entirety while referring to them by the audit for trying to establish that 2G and 3G prices are comparable and calculating presumptive loss for spectrum on the basis of revenue realised through 3G auction. One fails to understand how the TRAI recommendation of 11 May, 2010 quoted by the audit could be made applicable in retrospect for spectrum allocated in 2008. Additionally, 3G spectrum was auctioned for the first time in the country in early 2010. How could the revenue realised in 2010 for 3G be used for calculating the loss on account of 2G spectrum allocated as far back as in 2008 where the demand-supply position was also very different is something that needs proper justification.”