Kanimozhi said she was a journalist and writer by profession and not a career politician. 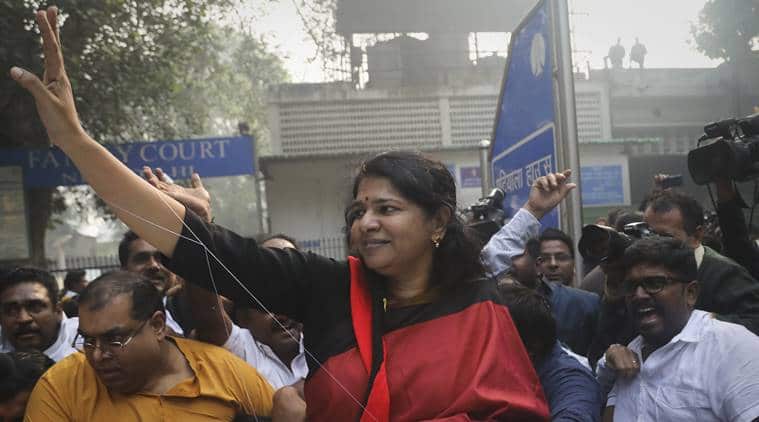 Kanimozhi said she was a journalist and writer by profession and not a career politician.(Express photo)

DMK Rajya Sabha MP Kanimozhi, who was acquitted in the 2G spectrum allocation case, said on Thursday that the last six years were “harrowing and excruciating” but she always believed she would see “light at the end of the tunnel”. The MP, who was arrested in 2011, said justice had been delivered. “I have been waiting these last six years for this day. The last six years have been harrowing to say the least,” she said.

In veiled criticism of the UPA II government, she said: “To be falsely accused in a case for a notional loss of Rs 1,76,000 crore to appease the Opposition that was stalling Parliament is atrocious…. I was made an accused just because I was a director in a company and for only about 20 days, where I had not attended even a single board meeting and where I had not signed a single document…. Speaks of the depth to which the system stooped to ensure that I was dragged in so that the DMK was defeated in the elections which were hardly five months away.” She said she was chargesheeted with the sole aim “to tag my name with a mind-boggling amount to make sure that Kalaignar’s rule will not continue for the next five-year term”.

Kanimozhi said she was a journalist and writer by profession and not a career politician. “I was accused of having amassed wealth through this scam. Let me tell you today, if my aim was to amass wealth through politics then I should have joined politics in my early 20s, but I came into politics only at the age of 40 when the party thought I was needed to come in to fill a gap,” she said. “If I was power-hungry, I would have easily become a minister, but I refused ministership. I was falsely dragged into this,” she said.

Kanimozhi said the experience had “definitely left me scarred. Now with this behind me, I will do all I can to strengthen the party and work for the people of Tamil Nadu. I owe a debt of gratitude to my family and party workers who were a pillar of support to me during these six excruciating years,” she said.

DMK working president M K Stalin, who spoke to journalists at his home, said the case was designed to destroy the DMK. “It emerged in 2009. In our political history, it will be known as a (case) imposed on us to destroy the DMK with exaggerated figures and accusations,” he said. “Now, all the accused in the case being acquitted is a great reprieve for us, especially for the DMK that committed no mistake.”

The acquittal was conveyed to DMK patriarch M Karunanidhi, who was “so happy, he shook my hands and congratulated”, Stalin added. He said it was not just political rivals but the media too that was a part of the campaign against the DMK. “In fact, we got defeated in the elections too because of these campaigns. This court order is a strong reply to all of them.”

He said the media should also take the court order to the public.