Leading the charge was Manmohan Singh, who had borne the brunt of an aggressive BJP attack when he was Prime Minister. Manmohan Singh had borne the brunt of an aggressive BJP attack when he was Prime Minister. (AP/File)

The acquittal of former Telecom Minister A Raja and Rajya Sabha MP Kanimozhi in the 2G case spread cheer in the Congress. The party said that Prime Minister Narendra Modi, the BJP and their “lackey”, former CAG Vinod Rai, should apologise for defaming the Congress and misleading the nation, and demanded that their accountability be fixed.

Leading the charge was Manmohan Singh, who had borne the brunt of an aggressive BJP attack when he was Prime Minister.

“We respect the court’s judgment,” Singh said. Asked whether he felt vindicated, he said, “I don’t want to boast. I think the court’s judgment has to be respected. And I am glad the court has pronounced unambiguously that all this massive propaganda which was being run against the UPA was without any foundation.” On the attacks against him then, he said, “Well, the judgment speaks for itself.”

In 2011, during an interaction with editors of the electronic media, Singh had spoken about compulsions of coalition politics when asked about his moral responsibility towards corruption charges on the government.

Following Thursday’s verdict, almost all top leaders of the Congress came out with all guns blazing at the BJP and the former Comptroller and Auditor General. Former Finance Minister P Chidambaram said, “The allegation of a major scam involving the highest levels of government was never true, was not correct and that has been established.” 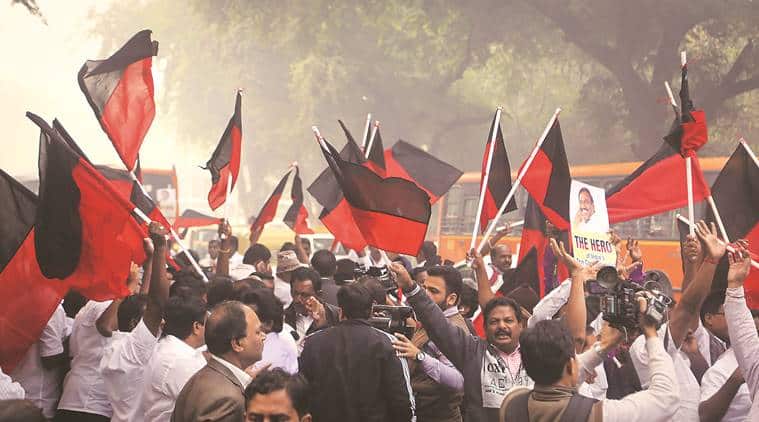 Supporters of A Raja and Kanimozhi celebrate the verdict outside the special court in New Delhi on Thursday. (Express Photo/Abhinav Saha)

While former Law Minister Kapil Sibal told The Indian Express that Rai should be sacked from all posts he holds and should tender an apology, former I&B Minister Manish Tewari said the verdict has established that “Rai and the then officers of CAG were possibly in the hands of forces which were inimical to the UPA government”. He said that all reports tabled by Rai require to be “revisited by an independent body” and called for an independent audit of the 2G report submitted by Rai.

Congress communications department head Randeep Surjewala said the bogey of 2G scam was the result of a conspiracy by the BJP and its “lackey” Rai. Accountability should be fixed against those including Rai who had dubbed it a scam, he said.

Tewari, who was a member of the JPC that looked into 2G spectrum licence allocation, said “first and foremost Vinod Rai should apologise to the country. He was the author of that Rs 1.76 lakh crore presumptive loss theory which completely derailed the India story, besmirched the reputation of India and destroyed innocent lives. He and his colleagues need to stand up and take responsibility for throwing these sensational numbers into the public space which today have been found to be completely incorrect by a criminal court.”

Former Law Minister Ashwani Kumar said the “court’s decision today represents the triumph of fair trial over trial by accusation”. At a press conference, senior Congress leader Anand Sharma said Rai is today the “super boss” of banks. He is the chairman of the Banks Board Bureau. “He appoints MDs . No former CAG prior to Vinod Rai was given such a big post. But he had done such a big job, so he got such a big placement. He is also the chairman of the administrative committee of BCCI. So it is clear Narendra Modi has recognised his contributions,” he said.