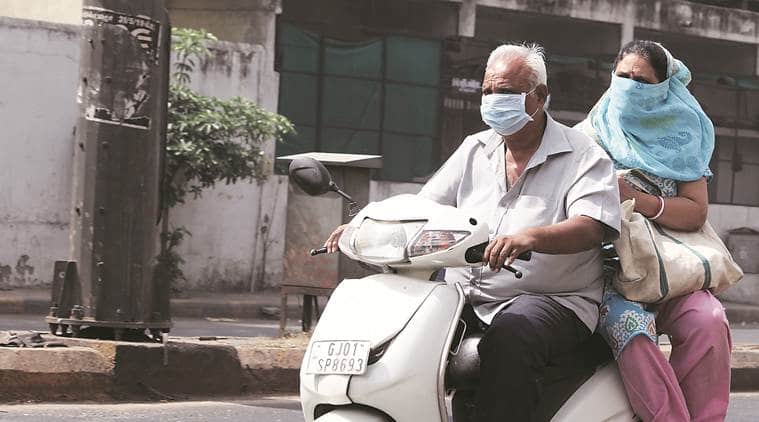 Khedawala is being treated at SVP Hospital in Ahmedabad and his health condition is stated to be stable. (Representational Image)

As many as 224 cases of COVID-19 were reported from Gujarat on Monday, taking the state’s tally to 1956, while 10 died of the viral infection, taking the death toll to 73.

According to Principal Secretary, Health, Jayanti Ravi more than half of the deaths analysed by her department, were of patients who had risk factors, along with the presence of multiple co-morbidities. “Risk factor is categorised as those aged above 60 years, those aged below 5 years or pregnant women. We found that 35 of the COVID-19 deaths or 52.23% were patients categorised as high-risk and had multiple comorbidities. As many as 21 deaths that is 31.34% deaths were in high-risk patients who had a single comorbid condition. Four deaths were such who were high risk patients but had no comorbidity. Seven other deaths were seen in patients who were neither categorised as high-risk patient nor had any comorbidity,”she said. Two of Monday’s deaths also saw no co-morbid condition.

Ahmedabad reported 152 new cases, taking the district total to 1,243 cases. Since Sunday, the AMC conducted 264 rapid antibody tests as well, with eight results turning positive. On Sunday evening, the government decided that those willing to pay and get treated in private hospitals, can do so in Sterling Hospital, HCG Hospital and Narayana Multispeciality Hospital.

Ravi said that of the 1,173 cases from the AMC jurisdiction, 912 were from the walled city area where curfew has been imposed. Out of 34 deaths, 25 were from the area, according to Ravi. Congress corporator Badruddin Sheikh continues to be critical on ventilator support, she added.

As per Aravalli district collector Amrutesh Aurangabadkar, the district has a total of 15 active cases with the patients housed at the Vatrak Hospital and Sarvajanik Hospital. The new cases were reported from Modasa, Dhansura, Bhiloda and Meghraj talukas with many reportedly with a travel history from Ahmedabad. Several villages in these talukas have been put under containment zone. This takes the district total to 16. Rajkot and Kutch with two more cases each, saw the tally go up to 38 and six respectively while Surat reported 27 more cases, taking the tally to 269.

Vadodara tally went up to 193 with 14 new cases while two more died, taking the death toll in the district to nine. Among those tested positive, seven were from the red zone of Nagarwada area, including six from a single family. A 55-year-old woman from Fatehpura succumbed at SSG Hospital and had comorbid condition of diabetes. Her 32-year-old son tested positive later in the day.

Another 60-year-old woman from Khodiyar Marta Khancho in Nagarwada too succumbed at SSG Hospital. She had hypertension and developed pneumonia, according to health officials.

Anand reported its 27th case in a 35-year-old woman from Isarama in Petlad. According to district officials, she was admitted at SVP Hospital in Ahmedabad.

Mahisagar district reported seven new COVID-19 cases taking the total in the district to nine. One was the 72-year-old mother of the first positive case, a 42-year-old Dubai-returned man. Four others tested positive from Balasinor taluka, all close contacts of a woman who tested positive on April 18. Two other cases, a 60-year-old man and a 34-year-old woman, were reported from Santrampur taluka from the same family. “The woman is a health worker and accompanied a pregnant woman to Godhra civil hospital. At Godhra she had met her sister-in-law who works as a nurse and tested positive later,” said District Collector RB Barad.

Mehsana reported two new cases — an RBSK doctor in his 30s and a 25-year-old health worker – both of whom were on deputation at Ahmedabad for conducting surveillance activities. This takes the district total to seven.

Municipal commissioner Vijay Nehra said that super spreaders are those who due to their nature of work come in contact with a large number of people. Thus, they have high risk of getting infected and infecting others.

“Vegetable vendors, people working at kirana stores, medical stores, petrol pumps, milk shops, grocery shops and those involved in door-to-door waste collection are termed as super spreaders. Massive campaign in all seven zones and 48 wards was launched today where a team from solid waste management will inspect if all these super spreaders are wearing masks, using sanitisers and maintaining hygiene standards,” Nehra said.

On the first day, the inspection team identified 110 such cases who were not following precautions to protect self and others from spreading coronavirus. They were penalised Rs 1,000 each. A total fine of Rs 1.10 lakh was recovered.