112 in a month: Why Covid death rate in Maharashtra’s Jalgaon is four times India’s

There may not be a single reason for the high death rate of Covid in Jalgaon. It is attributed to multiple aspects: health care neglect, little to no counselling for staff and doctors, delays in testing etc. 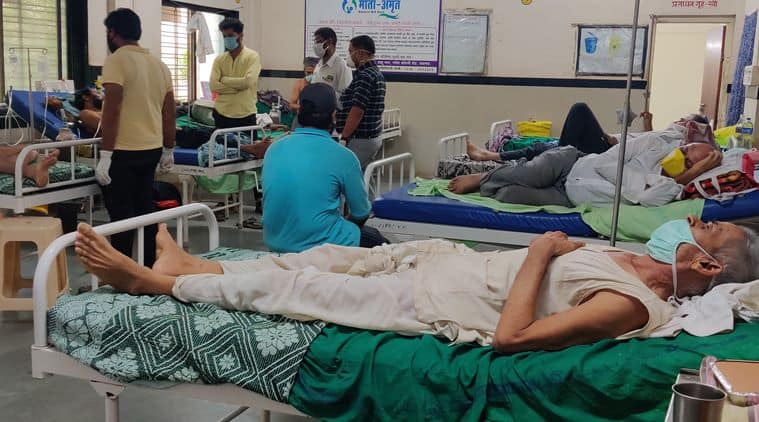 A ward in Jalgaon civil hospital for patients suspected of having Covid-19. (Express Photo by Tabassum Barnagarwala)

At 12.3 per cent, the death rate for Covid-19 in Jalgaon, a district 400 km north-east of Mumbai, is the highest in Maharashtra. Four cities — Jalgaon, Bhusawal, Amalner and Pachora — account for 80 per cent of the 112 deaths till June 4.

For District Collector Avinash Dhakne, alarm bells rang loud more than a month ago on May 2. Of the total 42 cases till then, 14 died had died in five days. The district, known more for banana cultivation, had recorded the first Covid-19 case on April 28.

But there is more to the death rate than the age and health profile of the Covid-19 patients. The state government has now set up a 10-member committee to audit each death and assess the reasons behind it.

An incident on May 28 in Jalgaon’s civil hospital will throw some light. The condition of Tafazzul Shah, 57, who was admitted on May 21, was deteriorating in the hospital’s ICU. Breathless, with oxygen level at 70, he seemed to urgently require a ventilator. His nephew, an Unani doctor, pleaded with the doctor on duty to intubate (insert a tube into the trachea for ventilation) Shah. 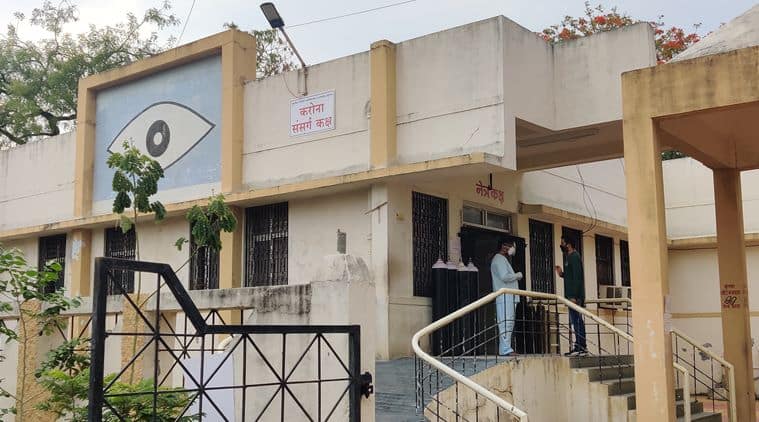 The covid ward in civil hospital (from outside). (Express Photo by Tabassum Barnagarwala)

When asked about Shah’s case, Dr BS Khaire, Dean of the Government Medical College where 92 Covid patients have died so far, said, “Our doctors are treating every patient. There are no complaints. No patient’s relative is allowed to enter.”

But the general hygiene has deterred patients from visiting the Covid hospital; they self-medicate until they turn breathless. Of the 907 diagnosed with Covid-19 till June 4, as many as 112 died. In fact, 13 were brought dead.

Read | Mumbai under scrutiny for testing less than it can

There may not be a single reason for the high death rate of Covid in Jalgaon. It is attributed to multiple aspects: health care neglect, little to no counselling for staff and doctors, delays in testing, lack of patient monitoring, and easy entry and exit of general public in isolation wards.

Another Covid patient, Rambhau Sadanshiv, 70, died due to “a delay in ventilator support” on May 28, his son Narendra Sadanshiv alleged. “The staff does not want to enter the ward, they throw medicines from a distance at the bed,” he claimed. Narendra remembers entering the isolation ward with no guards to stop him.

On May 31, a female patient stepped out of the isolation ward to buy tea from a road-side food stall; she returned four hours later after the hospital administration was alerted.

To complaints by many about lack of security and monitoring, Dr Khaire said, “There are adequate guards stationed at entry points and no relative is allowed inside.”

Three days later on June 3, the district civil surgeon informed the state government that at least 22 swab samples of suspected patients in Jalgaon were missing, lost in transit to a laboratory in Dhule. They have not been traced yet.

The district is trying to manage the two-year old Government Medical College (GMC); an attached civil hospital has been converted into a Dedicated Covid Hospital now. Against the 253 doctor posts, the hospital has only 119, of which a dozen don’t attend work.

When The Indian Express visited the hospital, there were no guards or staffers to stop entry even to the suspected Covid-19 ward. Prakash Konte, from nearby town Yawal, who was in the corridor, said: “I am here for the past 14 days. Till now my swab result has not come. Every time a patient next to me tests positive, I prefer to be on the corridor,” he said. 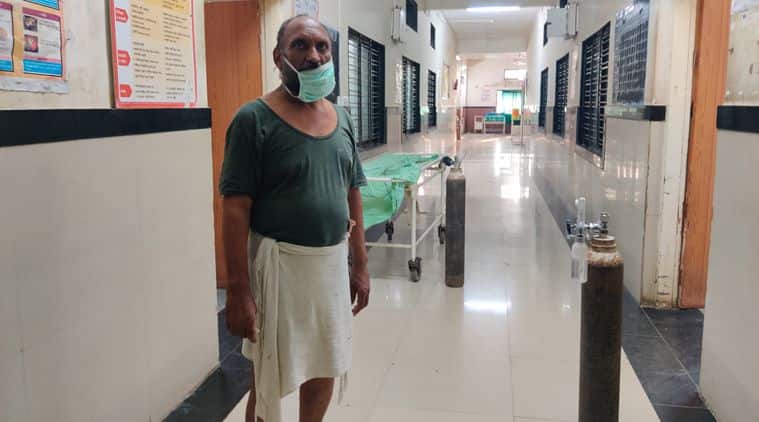 Prakash konte has been waiting for 14 days for his test results to come.(Express Photo by Tabassum Barnagarwala)

Inside the ward, Faheemuddin Shaikh lay on the bed with an oxygen pipe attached to his mouth, a cylinder next to the bed. He kept complaining to his brother Sajid that his body was in pain. “A doctor told him in the morning that he will give medicines. Its evening now,” said Sajid, stepping out to complain. “Look at them, none of them are going inside wards to check patients,” he said.

On the large number of deaths, Dr Khaire said, “Jalgaon has a population of 42 lakh. We are serving the entire district. Most patients come late, their lungs get severely infected by then. Fifty percent die within 24 hours of admission.” With reference to Konte, he said, the hospital was awaiting the results of a second swab sample.

But political leaders are concerned. Unmesh Patil, Lok Sabha MP from Jalgaon said, “I have written to the Centre for an audit to see if the hospital is following all protocol. There is negligence in the hospital, and patients are dying because of that.”

With Rs 16.5 crore allocated to Jalgaon for coronavirus, District Collector Dhakne used the funds for electrical fittings, fixing toilets, cleaning garbage in hospital premises, installing centralised oxygen supply, and getting more beds. The hospital has 225 beds for Covid-19, of which 160 are occupied. There are 30 ICUs, also fully occupied, and 60 beds with centralised oxygen. With the modernisation, he hopes, people will not be scared to visit the hospital.

A ward boy told The Indian Express they are not given proper protective gear. He wears a plastic shield, one that is commonly called an HIV kit, but his feet and face are exposed. “We were not trained, we don’t know what to do,” he said. The ward boy said relatives are allowed inside isolation wards to look after patients.

There are delays in testing with results taking 10-12 days. The district requires 250-300 daily testing. It sends samples to neighbouring Dhule district. If Dhule’s capacity to test is exhausted, the samples travel onward to Aurangabad or Pune. It was on one such day that the 22 samples were lost. In May last week, a new laboratory was set up in the hospital, but it can only test up to 150 samples.

Ayaz Khan, 45, was discharged recently from the hospital after testing negative. He said he was glad to be out. “I was kept in isolation ward for 18 hours with positive patients; there was no coordination,” he said. He should have been in the Covid suspect ward. “I told the nurse, and I was moved out a day later,” Khan said, but pointed out that another person with him, who too had tested negative, was also accidentally put in the isolation ward.