Some photographs of the baby had gone viral on social media. Many couples had also started approaching the administration showing willingness to adopt the baby. 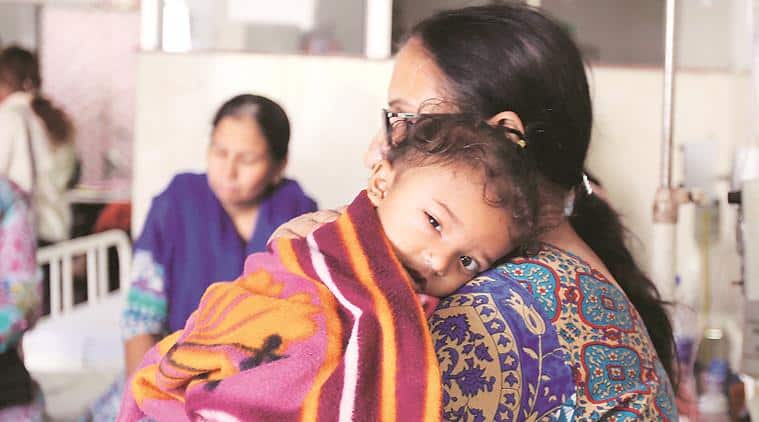 A ten-month-old boy, who was found near railway tracks after the train accident in Amritsar Friday and had been lying in hospital unidentified, was reunited with his family Sunday. However, in a cruel twist of fate, his father died in the accident.

The baby was admitted to the hospital with multiple injuries in his skull. Initially he was admitted at Civil Hospital where some eyewitnesses had brought him for treatment. Later, he was shifted to Guru Nanak Dev Hospital.

Some photographs of the baby had gone viral on social media. Many couples had also started approaching the administration showing willingness to adopt the baby.

However, on Sunday, the baby was identified as Vishal and his mother Radhika was found admitted at Amandeep Hospital where her condition is serious.

She had come to watch mela with her husband Buddh Ram (40), who died in the accident. The couple’s daughter was also found undergoing treatment at Amandeep Hospital.

The baby’s aunt (mother’s sister) Preeti was also admitted at Guru Nanak Dev Hospital in the past three days but she was unconscious and thus unaware that her sister’s baby is lying unclaimed in the same hospital.

Preeti’s husband Dinesh and a son Abhishek (9) died in the accident. She and her second son Aarush (3) survived.

Rakesh, brother of Dinesh, said, “Our entire family was separated after the accident and admitted to different hospitals due to which we were unaware where baby Vishal was. His mother Radhika was in a different hospital and we too have found her on Sunday only. Her husband Buddh Ram died. He was brother-in-law of my brother Dinesh, who also died. Dinesh’s son Abhishek died but his wife Preeti and another son Aarush have survived.”

He added that Radhika and her family had come from Sangatpura of Uttar Pradesh to meet her sister Preeti and celebrate Dusshera in Amritsar. The couple’s three other daughters are back home in Uttar Pradesh.

Chief judicial magistrate and head of district legal services authority Amritsar, said, “Since no one came to claim the baby in three days, it was being assumed that both his parents died but we continued to search for them. Today her mother was found at Amandeep Hospital.”

Dr Vipul Bhalla from paediatrics department, Guru Nanak Dev Hospital, said the baby has multiple skull injuries but they can be taken care of without surgical treatment.

Manpreet Kaur, district child protection officer, Amritsar said many couples were already willing to adopt the baby but they couldn’t have allowed it officially. “Our staff took care of the baby in hospital for three days. Many people had already approached us saying that they want to adopt it but it we did not allow it. Now he is with his mother.”