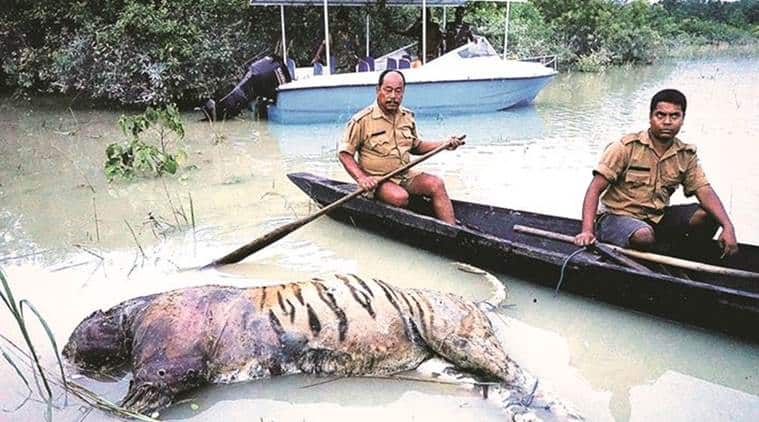 The tiger was found dead in Kaziranga on August 18; it is believed to have died on August 14. AP

Kaziranga National Park, home to the highest number of one-horned rhinos in the world, has lost 369 animals in two successive waves of floods, with the casualty list including nearly two dozen rhinos, one tiger, several elephants and buffaloes and over 250 deer of various species. “The first wave of floods in July came in slowly; the second wave was very rapid, catching the animals almost totally unawares,” park director Satyendra Singh said. “On August 12 for instance, the water level rose by more than 10 feet in just about 10 to 12 hours.”

Though the park remained under water for a longer period during the first wave, it lost fewer animals then — 105. In comparison, it has lost 264 more until Monday, of which over 200 were various species of deer. The toll in the current wave includes 20 rhinos, apart from five elephant calves, four buffaloes and four wild boars, besides the tiger. Though the tiger carcass was found on Friday, park director Singh said it had died on August 14 itself. “Our guards on duty had reported hearing a loud unusual sound from elephants on that day. On Friday morning we found a tiger carcass in a small highland, with the carcass of an elephant calf nearby. The tiger, a four-year-old male, might have died after it was attacked by a herd of elephants while it had probably tried to attack the elephant calf. It is an assumption though,” Singh told The Indian Express over the telephone.

The other possibility, according to Singh, is that the tiger came under attack from the elephant herd following a space crunch on the small highland where all of them had taken shelter when the water-level suddenly rose. “The second situation appears more likely, going by the fact that postmortem examined showed there was a lot of hog deer meat in the tiger’s intestines,” he said. Kaziranga has the highest density of Royal Bengal tigers in India, with the last count showing 104 tigers in the 430-sq-km park.

Among the over 200 deer that Kaziranga has lost in the second wave so far, most were hog deer, the remainder being swamp deer and sambar. “While bigger animals like elephants, tigers, rhinos and buffaloes generally move out faster to higher lands, especially across the national highway to Karbi Anglong, smaller animals run the risk of getting washed away by swirling flood-waters,” Singh said. Smaller animals like the hog deer also get knocked down while crossing the highway.

Kaziranga has also suffered serious damage to its infrastructure in the two successive waves of floods. With about 30 per cent of park still under water, Singh said a sizeable number of wooden bridges and anti-poaching camps have been damaged. “We will be able to make a final assessment only when the entire flood-water flows out of the park. But several wooden bridges as well as pucca culverts have been visibly damaged, some of them also washed away,” he said.

Kaziranga will also require major repair of the roads inside, especially with the Brahmaputra leaving behind a lot of slush and sand after the water receded. “We have about 500 km of roads and patrol tracks in the Park on the southern bank of the Brahmaputra, and these will have to be immediately repaired once the floods were completely out,” he said.