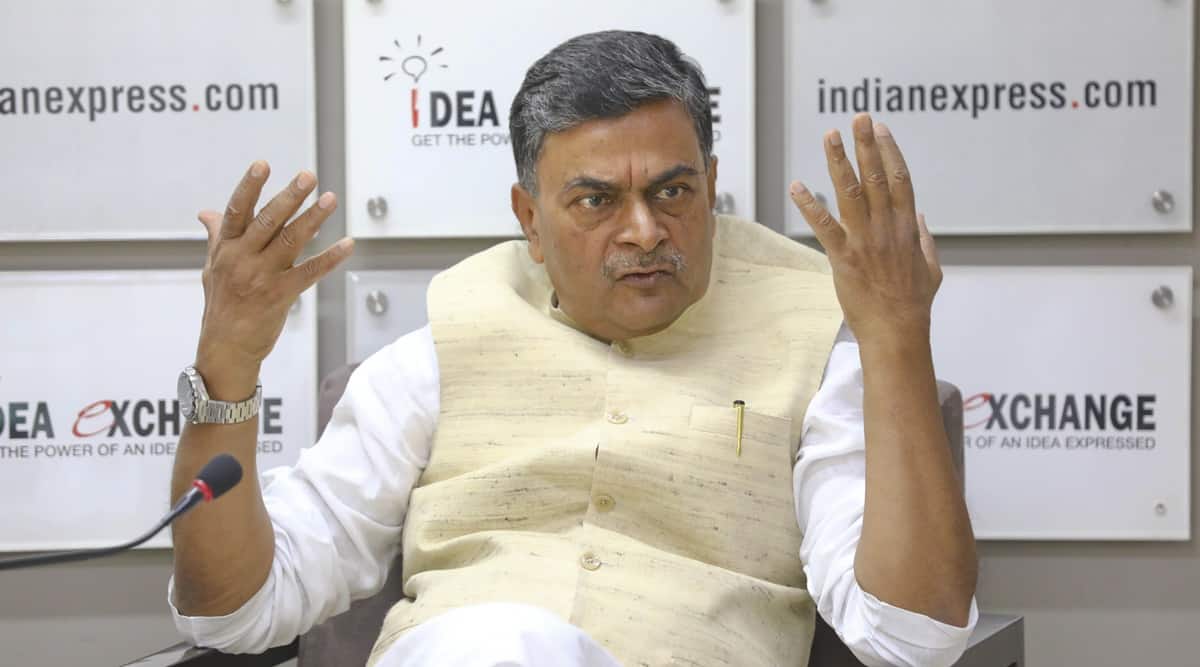 ASSERTING THAT it was wrong to expect India to start reducing its coal capacities, Union Power Minister R K Singh said the country will continue to set up new coal-fired power plants to meet its growing electricity needs — making it clear the promised phase-down of coal will happen in terms of its declining share in the overall fuel mix and not as an absolute cut in existing capacities.

“As per the targets we have set for 2030, the fossil fuel capacity (in electricity generation) would come down from the current about 60 per cent to about 35 per cent. This is the phase-down. If you are talking in absolute terms, the numbers (installed capacity of coal) will go up because our demand (for electricity) is going up (between now and 2030). In percentage terms (as share of overall production), it will come down,” Singh said during an Idea Exchange session at The Indian Express.

“Let’s be very clear. The phase-down (of coal) would happen in percentage terms, not in absolute terms,” he said.

“I have said it a number of times earlier, and I am saying it again. This is not something new. The availability of power… energy security is my first priority. I will generate power from wherever to meet the requirements of our country’s development. We are not going to compromise on that. I am not going to compromise on the availability of power for this country’s development,” Singh said.

At last year’s climate change conference in Glasgow, the final agreement had called on countries to “phase-down” their coal-based electricity generation because of large amounts of carbon dioxide emissions. An earlier draft had mentioned “phase-out”, which India, backed by a few other countries, managed to get changed at the last minute.

The call for a coal “phase-down” has been reiterated in the agreement at this year’s climate meeting in Sharm el-Sheikh, Egypt. But none of the two agreements specify how the phase-down is to be executed, or by when.

About 58 per cent of India’s current electricity generation capacity of 407 GW is based on fossil fuels. Coal alone accounts for about 50 per cent of the total capacity. India plans to ramp up its total generation capacity to 865 GW by 2032, according to the recently released draft National Electricity Plan. The share of coal in the fuel mix is expected to decline to just 29 per cent by that time. But that would still mean about 40 GW of capacity addition in the next ten years. Gas is projected to contribute another 3 per cent.

Singh said this represented an ambitious phase-down, not just for coal but for fossil fuels in general — something that developed countries were not ready to match.

Also read |At COP27, one hit and many misses

“None of the developed countries are doing this. Some of them restarted coal plants when Russia switched off gas this year. No one is talking about phasing down gas. Why? There is a lot of hypocrisy going around. That is why India has been insisting that the phase-down should be for all fossil fuels, not just coal. Why should we single out coal? Coal is not the only fuel that produces carbon dioxide. Oil, gas, shale… all result in carbon dioxide emissions. Let’s agree on a phase-down of all of these,” he said.

India had raised the issue of phase-down of all fossil fuels at the Sharm el-Sheikh meeting, but despite getting support from the European Union and the United States, the proposal did not make it to the final agreement. Singh, who did not attend the meeting, said he had “heard” that Russia, China and Saudi Arabia were not agreeable to the proposal.