Muslim women are entitled to a law against triple talaq

GenderAnd: The government and opposition need to work together to enable legal protection for Muslim women

It was a historic day for Indian democracy when the Lok Sabha passed the Muslim Women (Protection of Rights on Marriage) Bill 2017. Muslim women are entitled to legal protection in matters of personal law as much as all Indian women. But thanks to the alliance between patriarchal conservative religious bodies and the political class, Indian Muslim women have faced discrimination in personal law matters.

The Muslim womens’ movement against triple talaq in the last few years has made this change possible. It is equally significant that the Bill tabled by the government was supported by the Congress and other opposition parties. Indian democracy has certainly evolved since 1986 when a lone Shah Bano was silenced by the patriarchal leadership with support of the political leadership. This latest development is the outcome of the consistent and courageous struggle of ordinary women for gender justice. “My Allah has made me equal,” has been the motto of this struggle. It is equally significant that ordinary Muslim women have clearly demonstrated faith in democracy and democratic institutions such as the courts. GenderAnd: Howsoever late, Muslim women have welcomed the Bill as a step forward.

Before considering the merits and demerits of the Bill, a few facts need to be highlighted here. The Constitution grants right to religious freedom to all citizens. It also allows for personal laws to be based on respective religious texts of different faith communities. That is how we have the Hindu Code comprising the Hindu Marriage Act, 1955, the Hindu Succession Act, 1956 and a few more laws. The amendments in Christian Marriage Act have enabled justice for Christian women in marriage and divorce matters. Patriarchal Muslim bodies have stonewalled any discussion on reform in personal law. Muslims are governed by the Shariat Application Act, 1937 which is silent on important issues such as age of marriage, procedure of divorce, nikah halala, polygamy, women’s share in property etc. This has led to injustice to women in the form of the abhorrent practice of instant triple talaq, which was set aside by the Supreme Court in August 2017. But despite the SC judgment, triple talaq continues to take place and women continue to be thrown out of their marital homes in an arbitrary manner. A duly codified law laying down the procedure of divorce, support for the divorced woman and penalty for violations is imperative.

Also read | The triple talaq Bill: A mediocre legislation and a missed opportunity

In this regard, at least two amendments are necessary for the present Bill. The proposed law should lay down a detailed procedure of divorce based on the talaq-e-ahsan method involving reconciliation, mediation between the couple lasting for a period of minimum 90 days. While the proposed law says that triple talaq or talaq-e- bidat is illegal, it should also suggest what the legal way to divorce is. This would be somewhat similar to the mandatory six month cooling off period in the divorce of a couple married under Hindu marriage law. At the end of this mandatory process of arbitration and dialogue, divorce can happen if the matters can’t be resolved.

The Quran emphasises on a just and fair divorce, meaning the wife should get shelter, maintenance support, custody of children etc. The law should provide greater clarity on the support allowance mechanism. Violation of law should invite punishment, as any law is meaningless without deterrence. The offence of talaq-e- bidat should be a non-cognisable and bailable offence. The final choice of registering an FIR followed by a legal case should rest with the wife. Marriage is a matter of civil law and should be viewed as such while furthering gender justice. Bigamy is an offence both as per the Hindu Marriage Act and as per 494 of the IPC punishable by imprisonment up to seven years. This means that if a Hindu, Jain, Buddhist, Sikh, or even Christian man commits bigamy, he commits a non-cognizable offence punishable up to seven years in jail.  The proposed law must draw from the bigamy law, dowry law and the domestic violence prevention law where the offence is punishable. 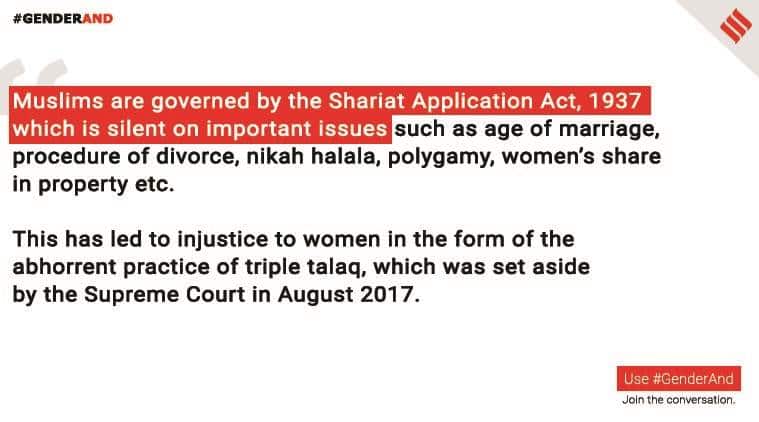 GenderAnd: Some patriarchal religious bodies are expectedly opposing the Bill.

Howsoever late, Muslim women have welcomed the Bill as a step forward.  The elected representatives cutting across the political spectrum have supported its passage in the Lok Sabha. It is hoped that they would collaborate constructively in strengthening the bill with suitable amendments and make this law a reality.

Some patriarchal religious bodies are expectedly opposing the Bill. But certain expert academics working overtime-writing articles to find only faults with the Bill is rather amusing. For one, these experts never spoke out in support of the Muslim women’s struggle against triple talaq. They were silent when stories of untold hardships and suffering of women were surfacing all across the country. They chose to trivialise the painful realities of women by starting a false debate around the rate of divorce in the Muslim community. In reality the debate was about the method of divorce and not the incidence per se. They need to recognise the historic shift where the ordinary Muslim woman has understood the patriarchal game and mansplaining is not working anymore.

The opponents of the bill must understand that it cannot be rejected just because the BJP government introduced it. For some, the time for gender justice is never right. The government and opposition need to work together to enable legal protection for Muslim women. This is the message from ordinary women who have fought against all odds with courage and determination against triple talaq.

#GenderAnd is dedicated to the coverage of Gender across intersections. Read our reportage here.

(Zakia Soman and Dr. Noorjehan Safia Niaz are co-founders of the Bhartiya Muslim Mahila Andolan (BMMA) that has been at the forefront of the battle against triple talaq. The views expressed are their own.)
© IE Online Media Services Pvt Ltd
Subscribe
Sign In
close