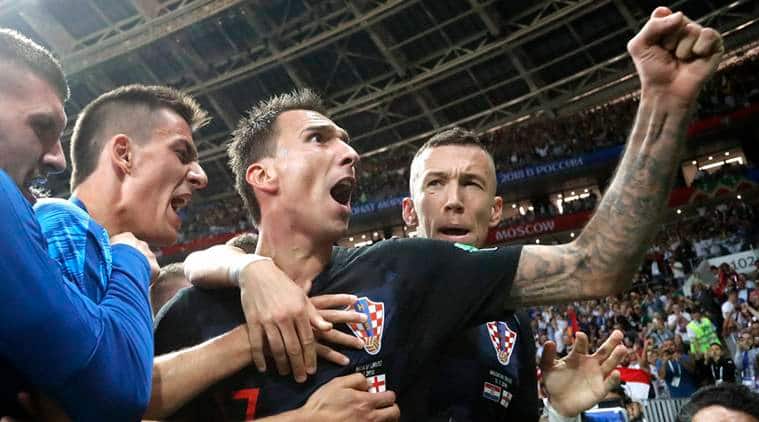 Moscow: Croatia’s Mario Mandzukic, center, celebrates after scoring his side’s second goal during the semifinal match between Croatia and England at the 2018 soccer World Cup in the Luzhniki Stadium in Moscow, Russia, Wednesday, July 11, 2018. AP/PTI(AP7_12_2018_000030B)

FIFA World Cup 2018 Final, France vs Croatia: Nothing has united the Croatian diaspora more than qualifying for the country’s first World Cup final, with celebrations among ex-pat communities rivaling the excitement felt in Zagreb. “You’ve got to understand how huge this is,” said Veljko Bosnic, president of the Dalmacija Sydney Croatian Club in Australia, home to one of the largest ex-pat Croatian communities in the world outside of Europe. “We’ve been raised on soccer for many, many generations. It’s in our DNA.”

Bosnic has to use the word “soccer” because Australians don’t understand the round-ball game is “real football”, and often confuse it with Australian Rules or Rugby League, played with a pill-shaped ball. But the Pacific nation has caught World Cup fever with more than half a million people sitting up until the early hours of Thursday morning to watch Croatia’s “fiery ones” defeat England to make it to their first ever World Cup final against France on Sunday.

Ivan Spehar, owner of Ivan’s Smallgoods in the Sydney suburb of Chester Hill, had to employ extra staff to keep up with World Cup demand for cevapi, the traditional skinless sausage eaten in the Balkan states. “Yes, there’s big demand for tomorrow – big, big orders, much bigger than usual, and next week if they do win first place there’s possibly even more then as they’ll be celebrating more.”

Croatian-Australians have always had a strong presence in the Australian national team, including big names like striker Mark Viduka and Mark Bosnich, the former goalkeeper for Manchester United and Chelsea Football Club, helping to popularise the sport. With a population of 4.2 million people as of 2016, Croatia is the smallest nation to make it to the final since Uruguay in 1950.

In Australia’s capital, Canberra, the First Secretary at the Croatian embassy Sandra Tvrtkovic visited French ambassador Christophe Penot on Friday ahead of the big match, which happens early Monday morning local time. “To win would be a dream come true for our small country, plus for Croatians around the world. We are really just living the dream now. Hoping and cheering for the victory,” Tvrtkovic was quoted as saying by the Canberra Times.

Australia’s population of 24 million people includes more than six million citizens born overseas, according to 2016 census figures, while nearly half of all Australians were either born overseas or have at least one parent born overseas. Many Croatians migrated to Australia in the 1960s and ’70s, and the country was once within Yugoslavia, so while census figures show 43,681 Croatian-born citizens live in the country, the real number of Australians with Croatian heritage is much higher.

“The census is way off, there’s a helluva lot more,” said Bosnic, who has lived in Australia for 55 years and has seen three generations grow up in Sydney.