FIFA World Cup 2018 highlights: England beat Colombia on penalties, through to Round of 16

England beat Colombia on penalties and qualified for the quarter-finals. They face Sweden on Friday.

Jordan Pickford’s save off Carlos Bacca and Eric Dier’s decisive kick ensured that England book themselves a place in the quarter-finals. (AP Photo/Ricardo Mazalan)

England were within touching distance of the quarter-finals when Yerry Mina towered above everyone else and hammered the ball in to the back of the net in stoppage time from a Colombian corner and forced the game into extra-time. That period had a lot of attacks and wayward shots but no goals. It came down to penalties and England, who have a miserable record with shootouts in major tournaments, held on and nailed their shots. Jordan Pickford saved Carlos Bacca’s effort and England thus made it into the quarter-finals. It is the first time that England have ended up on the winning side after a World Cup knockout game has gone into penalties.

We are into the quarter-finals already. It is incredible how quickly a World Cup seems to pass by. 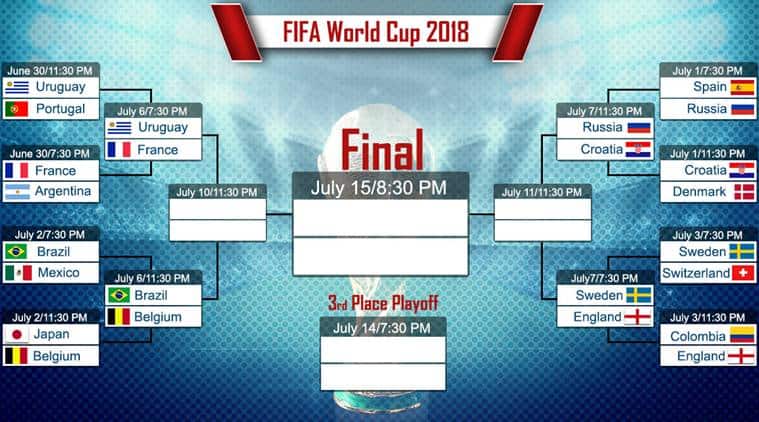 The shockwaves are still doing the rounds

They should all be knighted .... We have won a bloody penalty shoot out ....

England managing to win in the Penalty shoot out 4-3 and make it to the quarters.#ENGCOL

Can you believe this? England have actually beat a team in the World Cup knockouts on penalties, Eric Dier with the decisive shot and England will now face Sweden in the quarter finals. Jordan Pickford made a sensational save to keep out Carlos Bacca. Colonmbia forced the game into extra time when it looked like they were down and out but they could not do any further damage. Their Russia adventure is over, England are through.

Carlos Bacca's shot is saved by Pickford. England on the brink now.

Kieran Trippier steps up, calmly puts it into the top left corner, England back on level terms.

Uribe is next and he hits the bar! England given a chance to make amends.

Luis Muriel strokes it into the bottom right after Pickford goes the other way first.

Rashford is next, and he makes no mistake, slams it into the bottom left. All square

Cuadrado next and he too, slams it into the top left corner

Falcao and Kane take the first two kicks for Colombia and England respectively and they slam it into the net.

It does look like Colombia have the momentum. This shootout did not look remotely possible even in the last minute of stoppage time but Yerry Mina had other ideas. So here we go, Radamel Falcao to take the first kick.

So for the third time in this Round of 16, a penalty shootout, often called a lottery by coaches and players, will decide the result of the match. The teams get their massages as Fatboy Slim plays in the stadium.

Cuadrado gives away a free kick and gets booked. He is the sixth Colombian player, and the eighth overall, to be shown the yellow card today. The free kick is swung in by Young and it is headed out by Colombia for a throw in.

Cuadrado goes long for Falcao who is in the box, he can't quite reach it and the ball goes out. Falcao claims that the ball took a touch off Dier before going out, replay suggests he may have had a point there.

Trippier takes the corner, Dier gets at the end of it and his header is over the bar.

Trippier with a long ball that is taken down beautifully by Vardy, he moves into the right flank and crosses in for Sterling at the near post but it is put out for a corner.

Danny Rose with a piercing run into the box from the left after passing the ball to Henderson, he puts it back into his path, Rose takes a shot at the far post and it rolls just wide. Walker is taken off for Marcus Rashford.

Kyle Walker pulls up with a cramp after trying to dribble past two Colombian players. That was moments after Mina snuffed out an attack from Vardy.

Lingard slips it through to Vardy who takes a shot from around 15 yards out at a tightish angle, Barrios blocks it brilliantly.

Colombia vs England Live Score FIFA World Cup 2018 Live Streaming: Colombia forward Radamel Falcao has put his hapless stints at English Premier League clubs behind him and wants to deliver in their World Cup round of 16 against England on Tuesday. The forward spent a season each at Manchester United and then Chelsea between 2014 and 2016 but failed to make any impact, before returning to Monaco.

He managed just one goal in 10 top division appearances at Chelsea, nine of which were as a substitute in 2015/16, after having netted four times in 26 Premier League matches for Manchester United the season before. On Monday he said he had no feelings of revenge when Colombia meet England in Moscow's Spartak Stadium but was ready to deliver a fine performance.

"It is true that I did not shine as I had wanted in England but that is part of the past," said the 32-year-old striker. "Tomorrow's game I only can say that it is beautiful to be here to play against England and all our players are very well prepared. It is a game we always dreamed of playing. Since we were young children we wanted to play something like this," he said.

Colombia lost their Group H opener to Japan but beat Poland and Senegal to advance to the knockout stage. England, however, had booked their knockout stage spot after two victories in their first two group matches, resting several players in their final group loss to Belgium.