Part III: Why Mother Nature’s third squadron is the most acrobatic 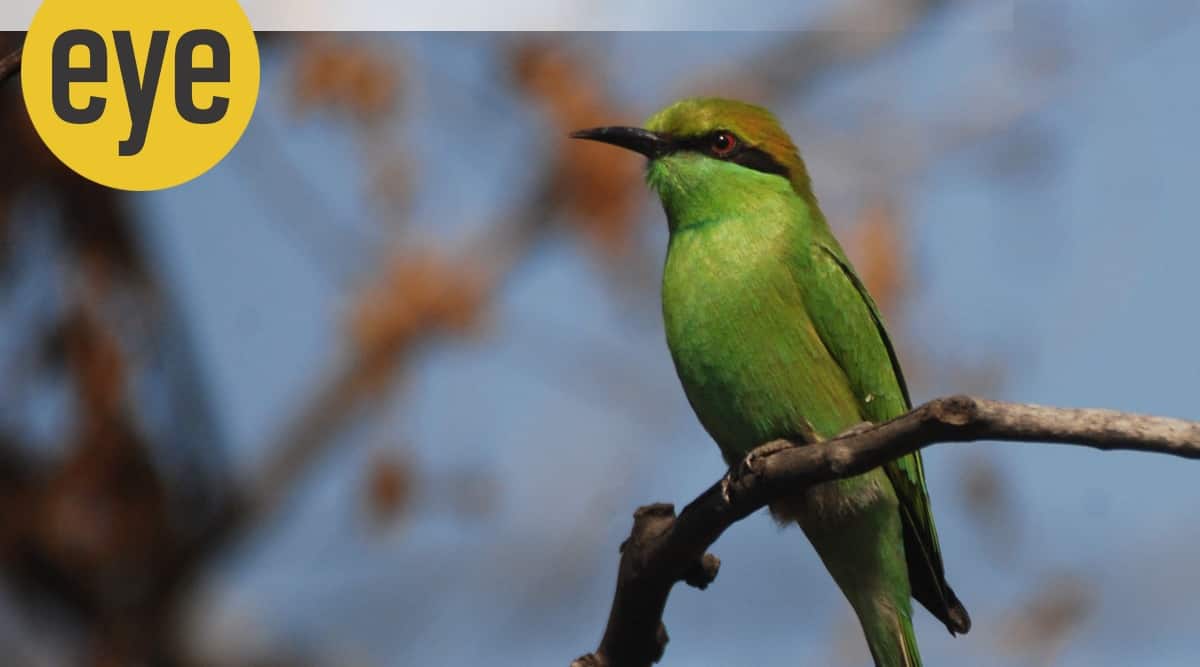 Among the smallest in these squadrons are the flycatchers: diminutive, perch-to-air missiles with a topsy-turvy attack strategy, made necessary by the tiny dizzy insects they target. Their short blunt wings make manoeuvrability amid thick foliage easy. They’ll squat on a branch, their eyes following a target and then launch themselves off in lunatic flight, so swift and dodgy it is difficult to follow. But most have a predictable practice of returning with their “kill” to base: the very perch they took off from. They usually go after flies and bluebottles and fare like that. Many are really tiny — smaller than sparrows, but in India at least, their most glamorous “top gun” has got to be the flamboyant paradise flycatcher. Senior males have glossy inky black heads and satin white and ashy grey bodies and sport silky white tail streamers 18 inches long. Junior males are brown and white, the ladies, too, but without the streamers. Found nearly across India, all have bulbul-like crests and neon-ringed black eyes. Much of my holiday in Naukuchiatal one monsoon was spent knee-deep in a garbage heap trying to photograph a nesting family in a gully. The garbage attracted flies and the flies attracted flycatchers — they zipped down virtually to my feet to snap up a juicy bluebottle I had missed. 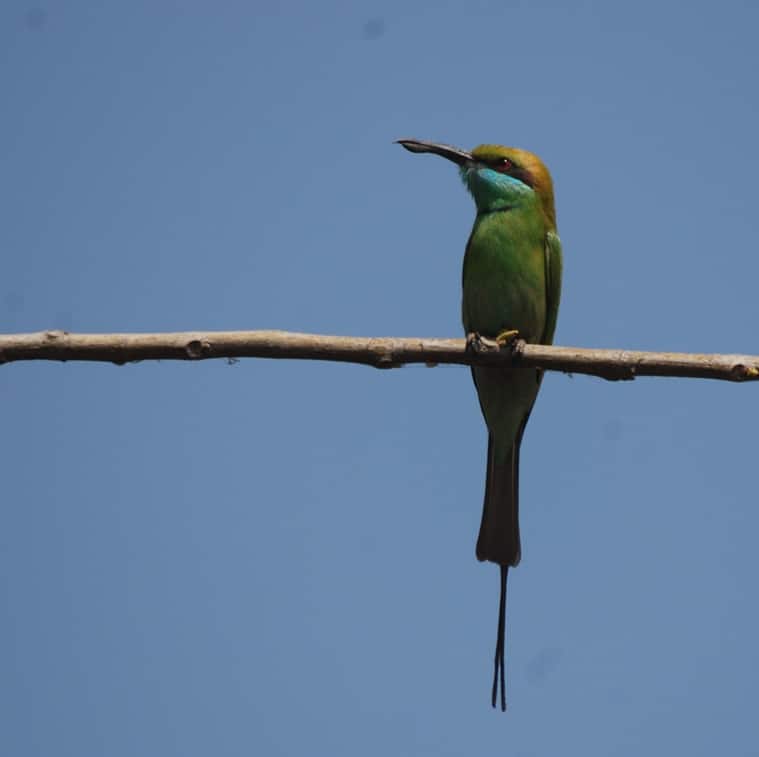 But it’s the tiny ones like the grey-headed canary flycatcher, the red-breasted flycatcher, and the white-browed fantail flycatcher that really impress you with their prowess. They lurk in deep foliage, in low light and yet will spot, target and home in on a fly whizzing around totally dementedly, launch themselves off on a somersaulting sally to snap it up and land back on their perch like an acrobat or gymnast at the end of their routine.

The other celebrated perch-to-air missiles clan are the bee-eaters. Found in Asia, Africa and Europe, they are brilliantly bedecked — in greens, turquoises, mauves, carmines, russets, bronzes and blues. Slim-built, medium-sized birds (say, mynah), they are masked like Zorro and armed with sharp curving bills with snappy pincer-power. The green bee-eater, one of the commonest in India, can be sighted perched on power lines, eyeing flying insects, or circling fairly high on sharp triangular wings, trilling like tiny bells, wing-flaps interspersed with skating glides. They go for the dangerous stuff, which the others don’t touch: stinger-armed bees and wasps, like dragonflies. A target, even as far as 100 m distant, is selected, chased and attacked. The powerful pincer snaps like a gin-trap, squeezing out the stinger and venom pouch, or the bird returns to its base and bashes or rubs its victim against the perch (with eyes closed), till it is ejected. Bees must make a rich, sweet snack! Bee-eaters are so good at their work that they’re rather unpopular with apiarists in spite of their snazzy looks and dashing manner! 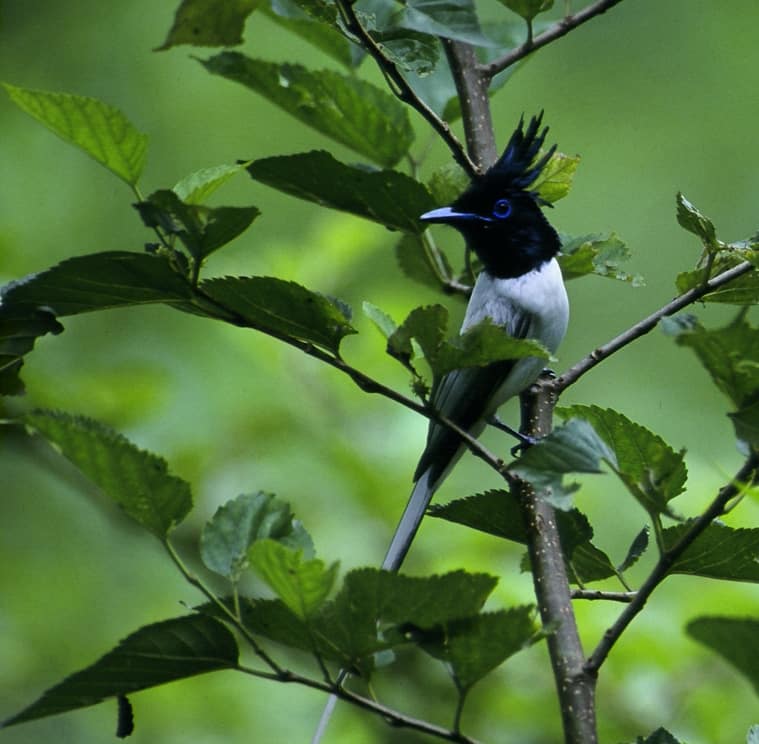 The pied kingfisher is a specialist fisherman. Splotched and speckled in black and white (gents wear a double gorget around the throat, the ladies a single), it’s armed with a deadly black dagger-bill. It will station itself, say, 10 metres above a clear waterbody, its eyes and bill pointing down, waiting to spot a fish. Or perch on a low-hanging branch over the waterbody until its silver target swims into range.

Over the oceans, the sleek gannets are the most impressive of air-to-sea missiles. Squadrons of these elegant yellow-white long-winged, long-billed birds fly fairly high over the waves and then suddenly twist and dive en masse, folding their wings against their bodies, spearing down several metres underwater chasing their targets. Their nostrils are inside their mouths, they have bubble-wrap like cushioning around their heads. Brown pelicans do much the same, but are not as elegant, though they can scoop up many more fish than the gannets in a single sortie! 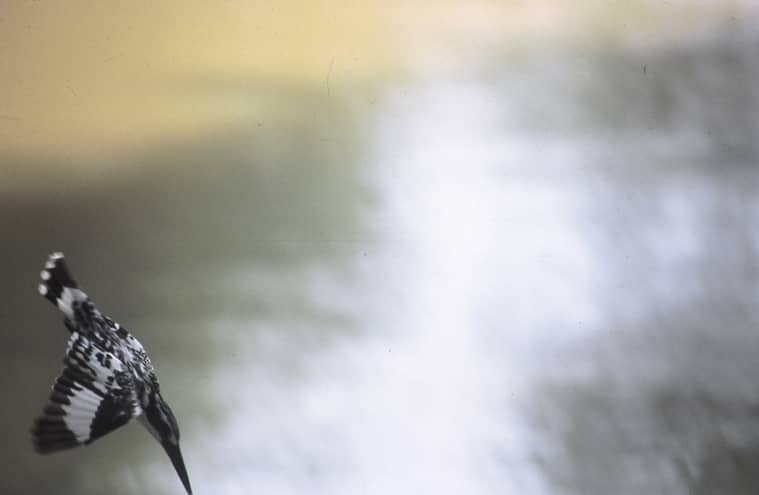 The amount of computing ability these birds have evolved to hunt, even if equipped with slow-motion vision, is a tremendous feat of aerial hunting. It’s like bringing down a released clay pigeon, with a single pellet in your shotgun — not blasting it apart with a wide-spectrum buckshot. Doff your hat to these maestros!

(Ranjit Lal is an author, environmentalist and bird watcher)