Why Kerala’s Lokame Tharavadu, showing over 250 Malayali artists, was a need of the hour

The Alappuzha exhibition that began in April, and has now been extended till November 30, brings together a show of hope, employment and regeneration in a pandemic-ridden world 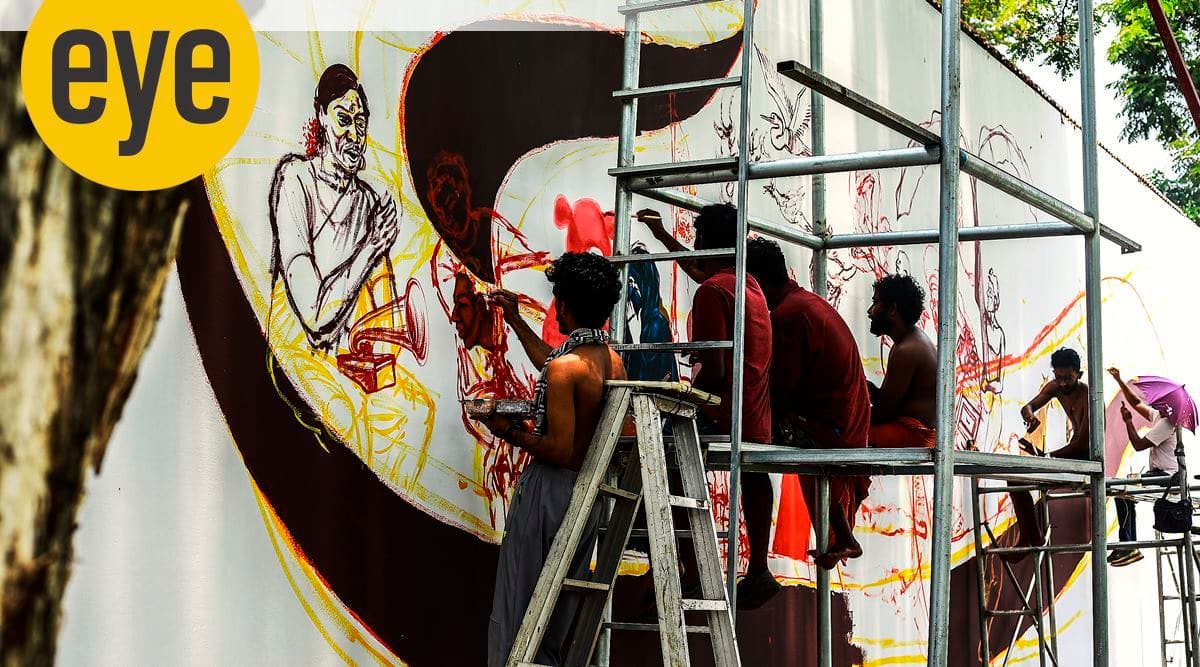 One of the oldest planned towns of Kerala, the picturesque port city of Alappuzha sits between the vast Arabian Sea and the placid Vembanad Lake. Designed by Raja Kesavadas, the dewan of Travancore during the reign of Dharma Raja Karthika Thirunal Rama Varma, traders flocked its shores for spices and coir in the 1800s. Its fortunes were to shine brighter after Irish-American merchant James Darragh set up India’s first coir factory in 1859 in Alappuzha. The establishment of Darragh Smail & Company propelled further investment, making it the famed land of golden fibre, though its significance as a trading hub dwindled over the years.

Attempts are now being made to celebrate its rich history and revive its past glory through the Alappuzha Heritage Project. The Kerala government has sanctioned a budget of Rs 208.25 crore to build it as a heritage tourism destination through the refurbishment of its old factories, warehouses and museums. While the blueprint is being implemented, the laidback scenic town, is seeing unusual activity as the host of one of the largest exhibitions of Malayali artists from the world over. Titled “Lokame Tharavadu (The World is One Family)”, the showcase organised by the Kochi Biennale Foundation and supported by the state government has been curated by artist and Biennale founder-president Bose Krishnamachari. It features works of over 268 artists and collectives from Kerala, displayed across the quaint town. Krishnamachari borrows the core idea of the exhibition from the Malayalam poem Ente Gurunathan by Vallathol Narayana Menon. “It appeals to the universal spirit of humanity. Given the current situation in India, where so many feel threatened by religious fundamentalism, an ideal cultural and secular space needs to be created. In smaller ways, communities need to come together and art can play a role in fostering that,” says the Mumbai-based artist.

The continued spurt in COVID-19 infections in Kerala has been a stumbling block for art aficionados, but those who have taken the journey to visit the exhibition that began in April this year have been welcomed with striking works of graffiti and murals on the walls of its venues that draw inspiration from the region’s heritage. Muralee Thummarukudy, operations manager at the crisis management branch of the United Nations Environment Programme, a recent visitor to the exhibition, says, “Many people may misunderstand: Is this the right time (to hold the exhibition)? But I cannot think of a better time to give people some relief. People are spent and bound to homes. To give them an open space and some sort of a visual experience as therapy is very impressive.” 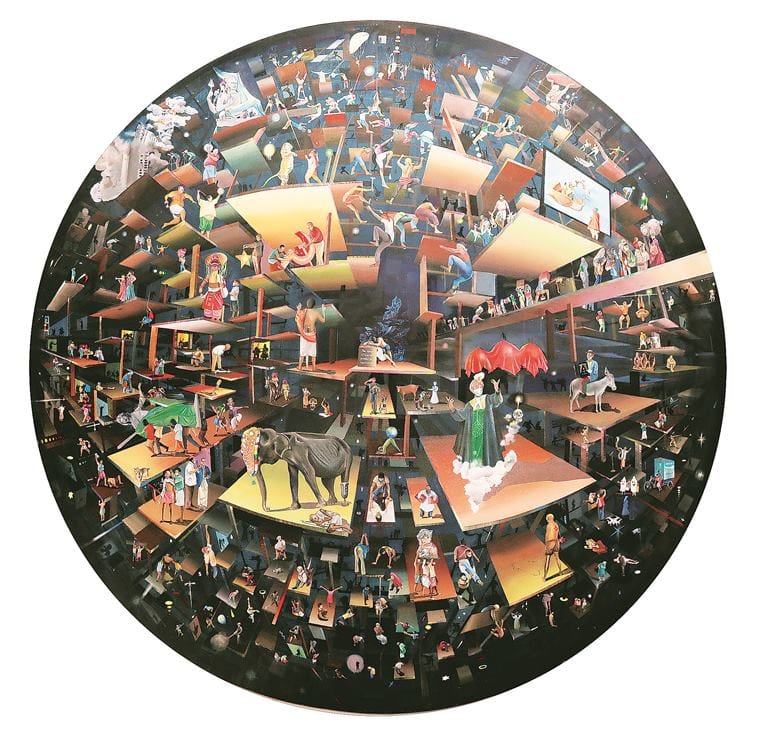 Bengaluru-based Anpu Varkey, 41, for instance, flaunts the region’s rich coir history on a 45 m wall of a building owned by textile company William Goodacre & Sons Pvt Ltd. Her graffiti shows human hands engaged in a tug of war from either side using a coir rope. Similarly, a mural painted by a group of eight artists calling themselves ‘Trespassers’ on a wall of the beachfront Port Museum shows people, animals and objects travelling in a crowded snake-boat. Vishnupriyan K, 26, a member of Trespassers, says the mural was inspired by the Biblical tale of Noah’s Ark and portrays a clutch of people seemingly escaping in the boat with all they could grab from their homes. Each of the eight artists had the freedom to rummage through their fantasies: so there’s the chakyar (a traditional performance artist) transfixed in the boat’s centre with a beehive in his armpit, two men locked in an embrace nearby and a man holding a plantain ripe with fruits, among other interesting characters.

Inside the decades-old coir factories and warehouses, refurbished into brightly-lit galleries, are artwork that span a whole gamut of themes and subjects. At the Eastern Produce Company venue, Chennai-based self-taught artist George Kuruvilla shines light on the identity crisis of the third gender. The series tries to relocate the transgender identity, often mocked by the term “hijra”, to an Aravani, a mythical identity borne out of a union between Hindu gods Shiva and Vishnu. A little further away, Baiju Parthan, 65, a Mumbai-based artist who flits seamlessly between traditional paintings and new media art, has artwork made on fabric using “3D software and presented as stereoscopic prints.” As visitors move along the artworks, the objects change their appearance, offering an altered sense of reality. A couple of kilometres away, local artist Kajal Deth’s watercolours, acrylics and poignant photographs capture the omnipresent theng or coconut palm and the plight of workers in the rapidly disintegrating coir sector. “My father and grandfather worked in the coir sector and my great-grandfather was an exporter. I’m well-versed with the problems of the sector. Submitting this work (for the exhibition) was natural, it has a great deal to do with my existence,” says Deth.

At a time when COVID-19 has altered the notion of home, Kochi-based Vipin Dhanurdharan, 32, explores its numerous connotations in his 83-minute documentary, Why We Always Return Home? “Home has a different meaning for each individual, from a romanticised view to a place of comfort or even mere shelter,” says the artist. Taking off from the migrant exodus during the nationwide lockdown in March last year, his protagonists include families and friends of the 16 migrant workers who died while sleeping on the railway track in Aurangabad in May 2020. They were walking their way back to their villages in Madhya Pradesh. In the installation Rest in Peace, Dhanurdharan pays tribute to them through a replica of the rail track that he visited in February. “While many of us were following COVID norms, the migrants struggled for sustenance and were victims of violence. This was also our collective failure,” says Dhanurdharan.

Incidentally, the exhibition was planned after the pandemic forced the postponement of the 2020-21 edition of the Kochi-Muziris Biennale. At the Trivandrum airport to catch a flight to Mumbai in September 2020, Krishnamachari met conservation architect Benny Kuriakose, who leads the Alappuzha Heritage Project. The two discussed the then state finance minister Dr Thomas Isaac’s desire to organise a Keralite artists’ exhibition and the numerous museum spaces that were being developed in Alappuzha. A month later, Krishnamachari had a list of 140 artists who could participate in the exhibition and a roadmap of artists’ studios he intended to visit across Kerala, from Trivandrum to Kannur. “I found some amazing self-taught artists, young and old, often with little home studios or sometimes none at all.”

Several of the more prominent names were also part of “Double Enders”, a 2005 travelling exhibition where Krishnamachari had brought together 69 artists from Kerala. “As an artist, Bose has always had a strong desire to draw links between artists from the state and to take their work back to the state… This is an opportunity for a lot of young artists to get their early exposure,” says Jitish Kallat, 47. The ongoing exhibition features his critically-acclaimed work Epilogue (2011), a photographic installation that retraces each of the 22,889 moons his father saw in his lifetime. Each moon is represented by a progressively eaten roti, culminating with the last moon he saw on December 1, 1998. Some of the exhibition’s most powerful works come from women. Out of the 268 artists, 56 are women, accounting for roughly 22 per cent. A lower primary school teacher from Ottapalam, Sreeja Pallam’s canvases stand out especially for the thrust on gender. The 40 women depicted in her paintings, in different occupational roles, are inspired from the faces Pallam has observed in her neighbourhood, during her journeys, and from the books she reads. The artwork, two years in the making and still ongoing, seeks to cement the role of women in Kerala’s skewed labour market. Despite being better educated than their counterparts in other Indian states, women in Kerala lag behind in work participation rate and wage levels. “This is part of my investigation into the position of women and the invaluable work they do in a traditional male-dominated society,” says Pallam.

For several artists, the disruption of the pandemic was an eye-opener. Smita GS, an artist from Kozhikode, allowed her oil-and-acrylic paintings to brim with colourful landscapes, the kind she did not get to see much of in the past one-and-a-half years. “Because I knew that I couldn’t step out of home during that period, I could imagine spaces where I wished to go. There are memories from my childhood in those spaces. Somehow, it became deeply personal,” she says. 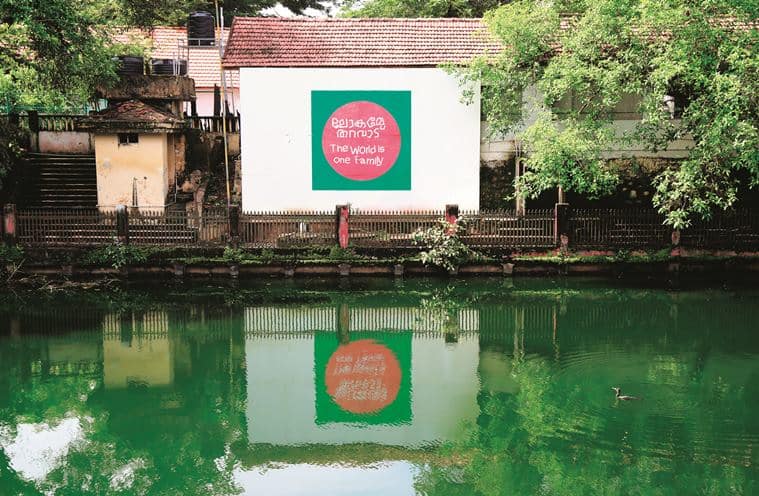 A warehouse that has been turned into an art gallery (Credit: Prakash Elamakkara)

If Smita found her calling during COVID in searching for positive spaces, Coimbatore-based Jitha Karthikeyan grappled with acute loss. Just before the pandemic hit, she lost her parents in quick succession to non-COVID causes. Then came the eerily silent months of the national lockdown. “The streets were empty and so was my house. Life had come to a standstill. As I went through the clothes and other items used by my parents, I began to question the physical forms of life. I had to erase them,” she says. For one of her artworks, Karthikeyan borrows a chapter from the Greek epic Iliad by Homer as the setting of a self-portrait in which she sees herself as the Trojan horse. “At that point of time, I was still searching for my identity… Most of my art redefines pre-set definitions to finds my own,” she says.

The showcase also has a place for the history of the struggle for gender equality. Alappuzha-based VS Blodsow, 45, takes inspiration for his Spectrum — Dear Mr Ellsworth Kelly & Others from American artist Ellsworth Kelly’s Spectrum series, featuring a prism of colour juxtapositions. In his frame, Blodsow brings together 33 shades of blouse material sourced from a local store, referencing the breast tax paid by women of lower caste in order to cover their breasts in the erstwhile kingdom of Travancore till 1924. In another installation, he argues for the status of Article 19 of the Indian Constitution that guarantees freedom of speech and expression. Artist Bara Bhaskaran, who is interested in subaltern histories, highlights the role of women coir workers in the historic 1946 Punnapra-Vayalar revolt, where the working classes took up arms under the leadership of the Communist Party of India against the oppressive policies of the then dewan of Travancore, Sir CP Ramaswamy Iyer. “The martyred men were celebrated but the women who were widowed and those who worked on low wages hardly got any acknowledgement,” says the 52-year-old. His series of paintings, Chambers of Amazing Museum, gives a face to the forgotten women.

With the exhibition extended till November 30, participating artists hope to interact with more visitors in the coming months. But even in this difficult time, Krishnamachari notes that sales have been encouraging at close to Rs 80-90 lakh. “It is optimistic, especially for artists who haven’t been part of the mainstream,” he adds, making a mention of 64-year-old Kozhikode artist Shanta CM, a poulterer who is attracting attention for her intricate abstracts, some of which have already found collectors.

The exhibition strikes a note of hope for more reasons than one, says Krishnamachari. “There are a lot of possibilities and ways in which the city can expand on this project, make Alappuzha into a heritage city, an art city, a creative city,” he says.