Up Above the World so High: Alwar Balasubramaniam takes up the brush after two decades 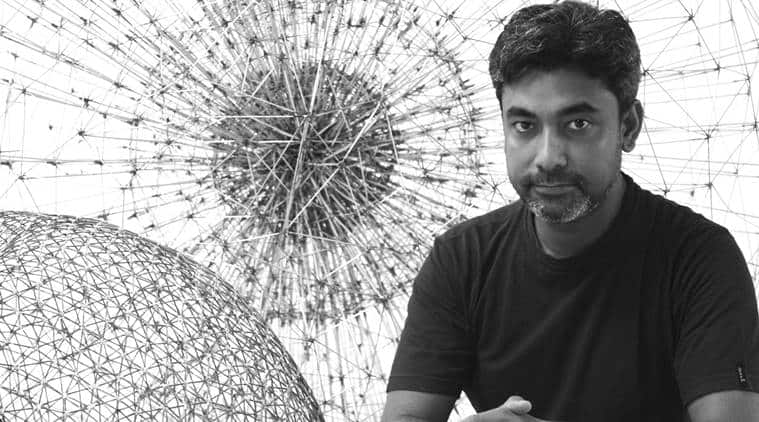 After more than two decades, artist Alwar Balasubramaniam has taken up the brush again, and chosen to wander into the realm of clouds. “When I decided to return to painting, it made me ponder over how we divide the canvas into many forms of realism, abstraction and other kinds of subtle divisions. It is almost like looking at the clouds. They are as realistic and abstract as they could be. Does a cloud even have an upside or downside? There is never going to be a time when I will witness the same cloud in my entire life and nature is never going to repeat any of its move,” says Balasubramaniam.

His latest muse, the clouds, fill the many canvases and walls at Talwar gallery in Delhi. If he sculpts a fragment of a cloud on the surface of a white wall in Cloud on the Ground (a fiberglass and acrylic installation), he chooses to paint an exact replica of the sky in other untitled canvases. But Balasubramaniam’s latest solo, ‘Liquid Lake Mountain’, goes much beyond just one grand element. An insightful exploration of the hidden forces of nature, it comprises 22 works encompassing sculptures, installations, paintings and two dimensional abstractions.

In 2014, the 47-year-old sculptor and painter shifted his base and studio from Bengaluru to Tirunelveli in Tamil Nadu, where he was born in 1971. It was a spatial shift which influenced his creative worldview. To be literal, the views included a picturesque mountain landscape, a river behind his studio and a canal at the front. “I see lots of nature all the time now,” he says.

Balasubramaniam’s latest work is, therefore, inspired a lot by how the rocks in the mountains become holed with little cavities where they collect water, which later dry out slowly and leave a mark on the bed. “When there is a heavy downpour of rain, there is a huge amount of water flowing in front of the house. Once the weather is back to being hot and humid, and all of it dries up, one gets to see these marks,” he says, “Throughout my practice, I have been creating works that talk about traces of being there and not being there. This show just made me come out of speaking simply about my body and myself. That dialogue is gone now.”

Perhaps, it is a reference to his 2002 sculpture, Self in Progress. Made from fiberglass, cloth, acrylic and wood, the work reflected upon the “trace” of being in his own body. Appearing like a 3D photograph, it captures his body seated on a chair, as his legs pop out while the head is caught in between the walls. Talking about the work during one of his TED talks in 2007, he had said: “There is an element of performance, sculpture and a feeling of being close to one self. It is almost like a fossil for the future.” His seamless artistic vision now seems completely at odds with his slightly rough initiation into the art world: his application to study fine arts at the Government College of Fine Arts in Chennai was rejected two years in a row before he finally got admission in 1991. He went on to study printmaking in Edinburgh in 1997 and gained expertise in printmaking and painting at Vienna in 1998.

Talking about his latest oil paintings, specifically, Liquid Lake Mountain, where he poured layers of green pigment and water on a plain canvas and let them dry over a period of 15 days, Balasubramaniam says, “The rings of colours on the canvas are recorded moments of how much mixture evaporated each day over a span of two months. It was like I was working with nature’s elements, which might not be visible like a large cube of melting ice.”

Founder of Talwar Gallery, Deepak Talwar, who has been representing Balasubramaniam for quite a few years now, says, “From the time I first met Bala over two decades ago, he has continued to inquire through his work the nature of perception, and how that, in turn, shapes the world around us. From revealing these omnipresent but hidden phenomenon, Bala more recently has employed these forces, as if in a collaboration with nature, to create his works.”

Breaking the stereotypes associated with paintings, is an untitled work at the gallery, where Balasubramaniam paints a set of clouds on an entire wall, against a yellow hued background. He brought the central canvas of a painted cloud panel from his studio before painting the entire wall over two weeks. Says Balasubramaniam, “I come from a background of doing sculptures which are part of the wall or space. Even while I was making these paintings, one question that was always there in my mind was, why does a painting always need to have a fixed way of looking at it, be it in the form of a canvas or a framed piece? So I went on to paint the wall, which is now part of the exhibition.”

Talking about the scale of Balasubramaniam’s vision, the breadth of his work and what intrigues him so much about the artist’s oeuvre, Talwar says, “He continues to challenge and tease, confound and delight while enhancing our understanding of not just the physical world but the metaphysical and mystical within us… that is magical.”

The Ancient and the Modern