Queer, Muslim and at ease

A new online magazine provides a culture map for the global LGBTQIA+ community. 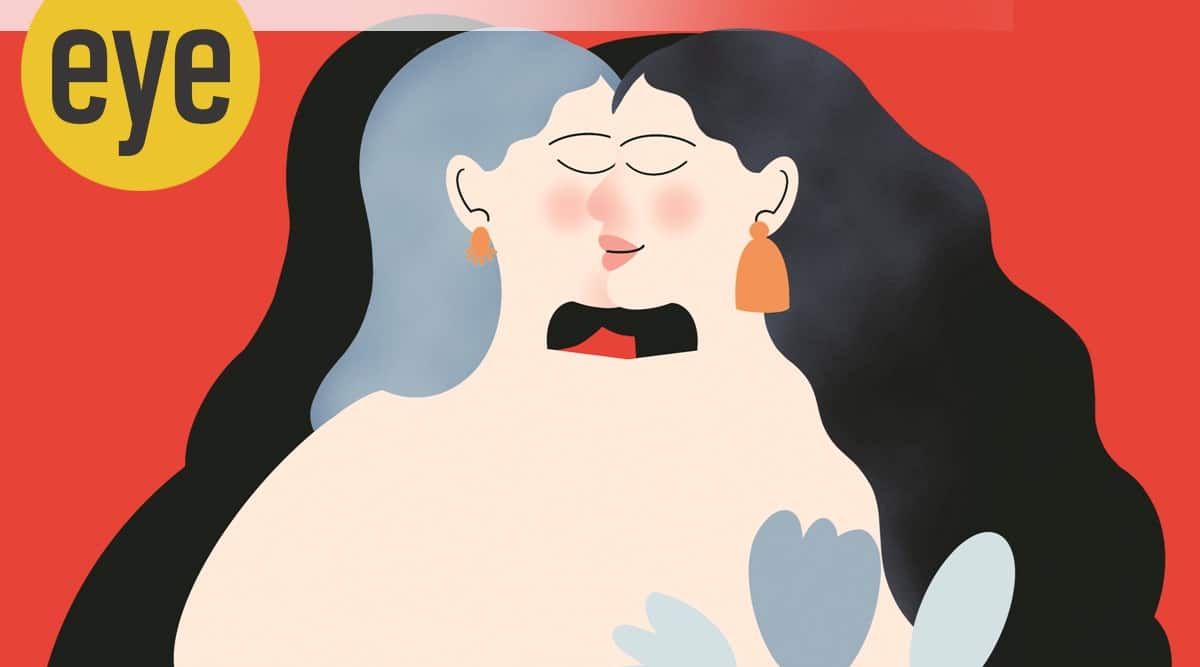 QueerNaani is ready with warm chai and biscuits to welcome questions of every kind, be it the clothes you want to wear or doubts about one’s sexuality, when to have sex or how to say no. Unlike most agony aunts, she isn’t here to pass judgement or let acerbic wit get in the way.

“I have grown up reading agony aunt columns in fashion magazines. While I liked the khurafati tone and the naughtiness to it, I didn’t like the judgemental, privileged space it came from. I wanted this to be a space where people can ask anything, and it will answered with complete ironic, non-sarcastic warmth, which is all-inclusive. We don’t have aged people in queer spaces. So, I wanted someone who comes from a space of great experience and has much warmth to share,” says Ainee, the creator of QueerNaani.

QueerNaani makes her appearance in a new digital monthly, The Queer Muslim newspaper, produced by the India-based collective, The Queer Muslim Project, one of the largest global online communities of LGBTQIA+ Muslims. 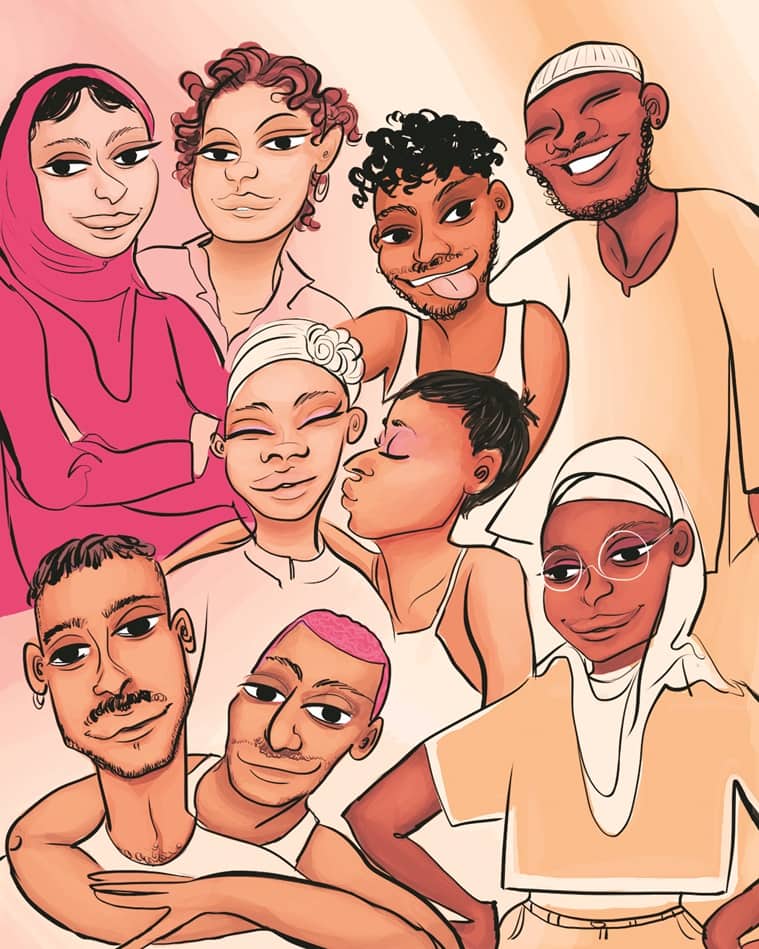 An illustration of the community by Mohammed Iman

In its inaugural issue, there are reflections of the “Muslim burden” captured in Pakistani-American artist Zulfikar Ali Bhutto Jr’s video series Tomorrow We Inherit the Earth, in which the grandson of former Prime Minister and President of Pakistan Zulfikar Ali Bhutto places “the queer Muslim future in a post-apocalyptic Islamic world”. There are interviews with Los Angeles-based rapper Sadeeq Ali and Philadelphia writer-activist Vannesa Taylor, who share what it is to be queer, Black and Muslim in the US, and a comic strip titled
Haraam Police.

The newspaper was inspired by a series of workshops that the platform held last year called “Queer Muslim Futures”. They partnered with the Fearless Collective, a feminist art collective in Bengaluru, to create a three-part series where participants imagined alter egos and universes using poetry, drag and portraits. It is, therefore, an endeavour to map the community and “to imagine that different worlds are possible”, says the founder Rafiul Alom Rahman. Art director Reya Ahmed and editor-in-chief Maniza Khalid chose to call it a newspaper as a nod to dailies where stories, histories, and opinions are documented. “Somehow, it’s very difficult to think that a newspaper can embody queer narratives. Though it doesn’t exist in print, I really hope that I can wake up one morning, have my coffee, and open a newspaper — The Queer Muslim,” says Khalid.

The origins of the Queer Muslim Project lie in a small town in western Assam, where Rahman grew up, and then in Delhi, where he moved for higher studies. “In school, I didn’t know of queer terminologies or the movement. I don’t think we had safe spaces in schools; it was easy to ridicule anybody. It was much later when I went to Delhi University that I learned about the movement and became actively involved,” he says.

Soon, Rahman realised how there were only a few Muslims or people from intersectional backgrounds in the space of queer activism in India. “Within Muslim communities, there is this idea that homosexuality is haram and that being gay is not compatible with Islam. It is quite suffocating because, on one hand, within your own community, there are hardly any conversations on this, and, on the other, if you go to queer spaces, it seemed like people aren’t stressing enough on the intersections or talking about diverse representation,” says Rahman.
At that time, there were two narratives about queer Muslims in India. “I remember reading an article that within Islam, there wasn’t space for queer people. The writer argued that he would rather be gay than Muslim. A study on men who have sex with men in South Asia showed that many of them would go back home to their wives or families and very comfortably be Muslim. There wasn’t space where you could be both. You had to give up one identity to be the other,” says Rahman. 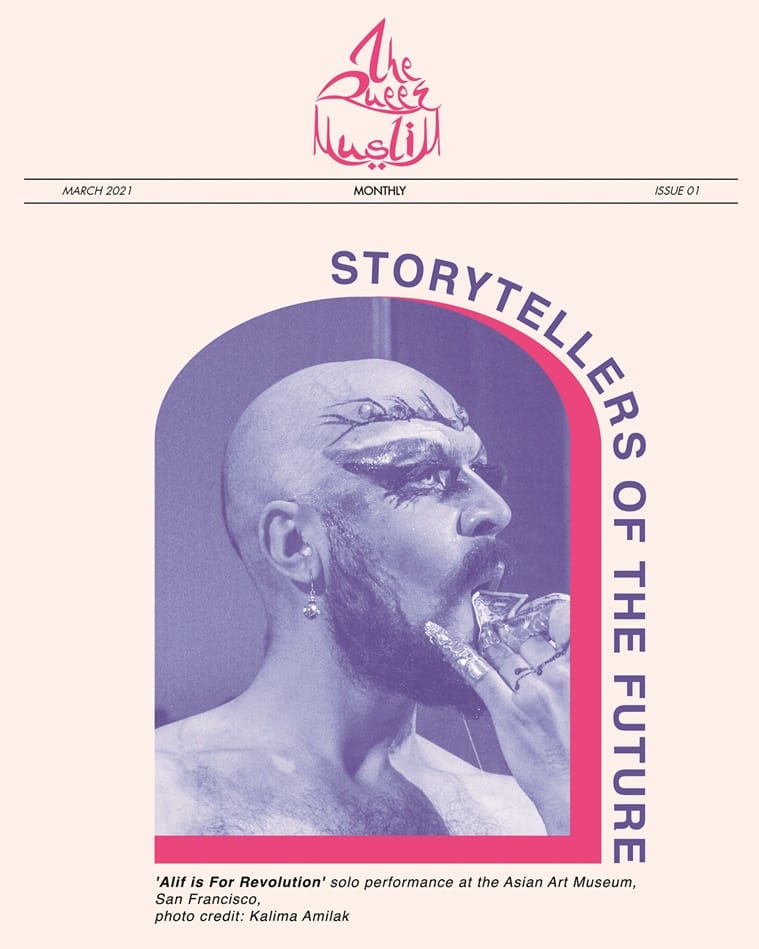 The poster for the newspaper, The Queer Muslim

So, he launched The Queer Muslim Project in 2017. What started on Facebook, where Rahman shared videos and lectures, has now become a global community of over 25,000 people on Instagram. People from all over the world share stories, including those from South Asia, North America, the Middle East and North Africa.

“Often, other people tell your stories, and as queer, Muslim or minority, we are more often than not just characters in their stories. We don’t have any agency, we don’t decide the fate of the story. Our question was how do we shift that? How do queer Muslims become agents of their stories?” says Rahman.

In 2018, when they organised the first-ever national-level LGBTQIA+ Muslim consultation, in collaboration with the NGO Aneka in Bengaluru, it gave them a sense of the challenges people faced, from mental health, finding safe spaces, to being part of a community. “When you talk about being Muslim, there are these ideas about being a terrorist or Islam being a conservative religion. Islamophobic ideas also exist in queer spaces. So, we had to create more narratives and shift the idea that ‘you are not alone’,” he says. Recently, a girl reached out to them, who shared that she used to go to sleep thinking she was alone. Then, one day, she found the Queer Muslim Project, and she realised she was not really alone.

There are also others who are dealing with a lot of guilt and shame for being queer and Muslim. “We get a lot of messages and we guide them to the resources that can help them. But this is a discovery that takes its own time. A girl who I had reached out to some years ago said she needed more time to share her story. Recently, we featured her. She said that this is the change that has been possible with all that’s been happening within the community,” says Rahman.

This what the digital newspaper attempts to achieve — to help people realise that there is no one way to be Muslim and queer. “We use Muslim in a very expansive sense to signify and denote cultural, social, political, ideological, spiritual experiences. But we also use queer in a way that is a self-identification. We don’t set the definition for them,” says Rahman.

At the same time, they do get messages from people who say that “this is sinful and that we will go to hell”. “But it doesn’t discourage us because we have so much love that comes from not just queer people, but also from a lot of straight allies. The idea of what it means to be a Muslim today, both in India and around the world, is shifting,” says Rahman.

When the world’s your family and you paint the town red, blue and every other hue