On a wing and a prayer: Tamil Dalit writer Bama on 25 years of Karukku

Tamil Dalit writer Bama on 25 years of Karukku, writing in the language of her people and being a mentor-teacher to first-generation Dalit students. December 2017 marked 25 years of the publication of Karukku, the first autobiography in Tamil by a Dalit. Do you remember the person you were when you wrote it?
When I wrote Karukku, I was completely broken. After seven years of being in a convent as a nun, I had quit. I found that I had lost everything — a job as a teacher, a house, enough to eat and drink. I had lost my confidence, I shrank from meeting people. In that state, I began to think of my childhood, and the things that I had lost. A friend advised me to write, and I did. I wasn’t thinking of writing a book at all.
Looking back, in these 25 years, I have grown tremendously, I have become so free…25 years of Karukku has also meant learning to live alone, as a single woman. I ended Karukku by saying that I was a bird with broken wings. Now, as I have said before, I am a falcon, flying high in the sky.

You wrote in a Tamil that was different from the literary language of the time. What was the reaction?
In Tamil literary circles, they questioned me a lot about the language. They said, ‘She is an educated lady. Why has she written in dialect? Why do her characters speak in abusive, filthy language?’ That made me furious. Because who are they to judge my language? The Brahminical language is used everywhere — they accept it. They are proud to speak in their language. Then why not I then? My language and that of my people is beautiful to me. So I deliberately used it in all my novels after that.

How do you conceive of Dalit feminism?
I have talked more about Dalit feminism in my novels, Sangati, and Manushi, which is the second part of Karukku in some sense. I have written five-six stories about feminism. There is one story, called ‘Konnu Tai’. It was a very controversial story, even women did not like it. It was about a woman, a mother of four children, who leaves her drunkard husband and goes to her mother’s place. She also leaves behind an infant, who she was breastfeeding. Everybody condemned her. But she was stubborn. She said, ‘Let him know what it is to have a child. They are his children too.’ Her mother says, ‘If your husband remarries, your life is finished.’ She says, ‘No my life starts then’. She takes off her thali, sells it and starts a shop on the street. One famous male writer wrote a letter to me. ‘As a woman writer, you should have feeling for a mother. You should have ended the story like this: At night, she thought of her youngest child and wept.’ (laughs)
I have written stories about how men abandon their wives only to remarry, about a woman who, after a hard day’s work, would pretend that she has been possessed by a goddess so that the husband would stop bothering her for sex. In these very small ways, I have expressed the feelings of women in general, not just Dalit women.

When you walked out of the convent in the 1990s, was it a crisis of faith for you?
I had faith in Jesus, and I have faith in him, but not in these institutions, the church or the convent life. For me, Jesus was a revolutionary: he took sides with the poor, women and lepers. But I found a contradiction between his teachings and real life. I couldn’t stay in the convent because I saw the caste practice there. They said we are for the poor, but they welcomed only the rich and the upper caste… For me, Jesus, Ambedkar, Periyar remain a source of strength.

When did you read Periyar and Ambedkar?
I had read Periyar when I was young, but not very deeply. To even get books was difficult those days. I read Ambedkar much later, in the early 1990s, when we celebrated his  birth centenary. At that time, his writings were translated in Tamil. It was an inspiring and strengthening experience for me to know about his struggle. Then I sought out his books, particularly The Annihilation of Caste.

Tell me about Uthiramerur, where you stay.
It is a historical place, famous for an early form of direct democracy called Kudavolai [dating to the 10th century]. But the inscriptions on the stones and the temple show that Dalits could not participate. Even now, it is a place notorious for caste practice. Each street is named by caste. I live in a mixed neighbourhood, but I regularly face caste discrimination. First, no one would rent a house to me because I am a Dalit, and second, a single woman. Then I decided to build a house of my own in 2000. They resented that. Just opposite me is an upper caste family. I have to fight with them daily. They will dump rubbish at my door or in my house, let their cows inside my house. Even yesterday, after the Pongal celebrations, this woman comes and throws the sugarcane husks near my house. I was standing outside. I glared at her, and she glared back. I am tired of fighting actually (breaks into a laugh). Now I am laughing, but…every day is a struggle. (laughing again)

Do they know you are an award-winning writer?
That also they look upon as a negative thing. ‘So many men come to her house, she is travelling all the time, where does she stay, what does she do?’ In the beginning, it was painful. I used to worry. Now, I say ‘okay’. I am also stubborn. I am not going away anywhere.

Many stories in the new translation of your work, Just One Word (OUP), are about children and teachers. You have been a teacher for many years. Why is this close to your heart?
I retired in 2015. I taught in a high school for about 10 years in Chennai. Then I asked to be transferred to a primary school in a village. Why I came here was because they were mostly Dalit children, first-generation learners. When I started working, there were hardly any students in class. We had to literally drag them back to school from their homes or fields. Gradually, they understood why school was important.
I had a very fulfilling teaching experience in these 20 years. I have learnt a lot from children — patience, to let go, to be free like them and to forget and forgive. People sometimes say, especially when they want to hurt me, ‘Oh you are a single woman. You haven’t given birth to a child. What do you know about anything?’ But I know the heart of the child.

What kind of encouragement did your students need? How did you help them?
First of all, I tell them ‘I love you. I am for you.’ That assurance I give. Only then I will go to academics. In government schools, there is no period set aside for play. But every day, for about 40-45 minutes, I would play with the students. In class, they would sit rigidly. While playing, I could see how they were — so free! Playing with children renews you, both physically and mentally.
Though the government prescribed a lot of things, my priorities were to teach the children to read and write — and to speak, because children are not given enough time to speak, to share what they want. If I found a child having difficulty in division or multiplication, I didn’t force them. I teach according to each child’s capacity, and I know what each child is capable of…Education is supposed to change society but it is an institution which caters to the caste system. That’s how small children wither out. My next novel, which I am writing, is based on my experiences as a teacher.

Indian politics is in a turbulent phase. How do you look at the recent attacks on Dalits — from Una to Bhima Koregaon?
It is a struggle. It hasn’t started now. We have been resisting from the beginning. Now, because Dalits are politically more aware, educationally a little better off, these become threatening to the oppressors. Dalits want change, whether it is in religion, politics or in literature, but their oppressors don’t want it. When they want to celebrate their freedom and assert themselves, the upper castes want to oppress them again. That is what Bhima Koregaon is about. Una showed that a cow is more important than a Dalit life. It shows that they are treated as less than human.

What keeps Dalits going?
A love of life. In spite of all these hardships, we love life and we want to live. The Dalit culture is a life-giving and life-affirming culture. Birth or death, we celebrate everything. Celebration and assertion: these are the two wings. And that’s how we fly.

Across the Paddy Fields 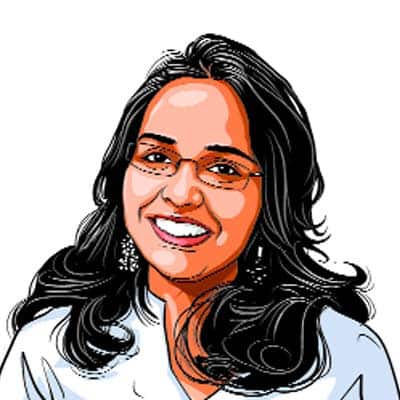