I feel that language is stronger than religion: Javed Akhtar

Lyricist and scriptwriter Javed Akhtar on the importance of language in communal life and if the Angry Young Man would survive today. 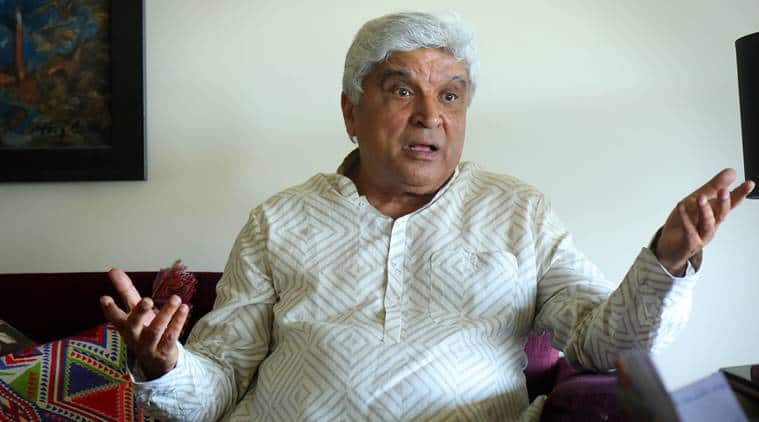 Your next release is Namaste England. Are you happy to have worked with a young music composer, Mannan Shaah, for it?

Yes, I am. Working with anyone is easy as long as you realise that your collaborator has the understanding and experience even if he is younger to you. I genuinely believe that people who are in their 20s and 30s understand certain things that I don’t. I have a lot to offer to them and vice-versa.

You have written lyrics for a whole range of Hindi movies. Is there any particular kind of film that you prefer over the other when it comes to writing lyrics?

I have written lyrics for Shyam Benegal when he made Sardari Begum (1996) about a thumri singer. Obviously, the language needed to have the feel and vocabulary of that period. That was a great experience. Rock On!! (2008) was unprecedented. No work can be good or bad because of the genre. You can write beautiful pamphlets and a very bad novel. So, are pamphlets and posters inferior? No. Every genre is interesting — it has its own language, grammar and syntax.

The first movie for which you wrote lyrics was Silsila (1981), over a decade after you established yourself as a screenwriter.

You have to write some poetry, first of all, to decide if you can become a lyricist. I was born in a family of poets. My father (Jan Nisar Akhtar), grandfather (Muztar Khairabadi) and their friends were all poets. By the time I was 12, I had memorised hundreds of couplets. I could recite for hours poems written by others. I knew I could write a line in metre. But I never dared to do it till I was 33 years old. When you develop objectivity and understanding of the medium, that can be frightening. That apart, as long as, my father was there, I thought it was not my business. When he passed away, I felt a void. I was a closet poet. Once Dr Dharamvir Bharati, editor of Dharmayug, and his wife, took some of my poems and published them. One of the few people who knew I write poetry was Yash Chopra, who had had Sahir Ludhianvi as his lyricist since his debut movie, Dhool Ka Phool (1959). Ludhianvi, for some reason, did not want to write any more. So, Chopra, who was also advised by Lata Mangeshkar, persuaded me to write lyrics for Silsila and accepted my very unreasonable conditions.

What were these conditions?

I said that if the highest paid lyricist gets X amount, then I want X+Y. I told him I was not going to wait for the amount till he finished recording the songs and he should send me the amount beforehand. By doing this, I wanted to break the deal. But he accepted the fees I quoted and handed over the amount. While I was going to his house, I wondered, ‘I have behaved like this but will I be able to deliver?’. I reached his house around 10.30 am. By the time I left in the evening, I had written a song. The music composers Shiv-Hari (Shivkumar Sharma and Hariprasad Chaurasia) played the tune and I wrote down Dekha ek khwab. That’s the very first song of my life. I wrote Neela aasman so gaya next.

How did you strike a balance between writing scripts and lyrics?

For a while, I had to do both even though I found writing lyrics more seductive. You can get appreciation for songs the moment it’s recorded, while making a movie is time consuming. Writing a script is like running a marathon while songs are like 100-mt sprints. But that does not mean that anyone can be Usain Bolt. Now, I want to write scripts again as the younger generation seems to know me only as a ‘lyricist’. I’m writing dialogues for a web series and scripts for some films.

You led the fight for the rights of lyricists and music composers for long. Has the scenario changed?

There was an amendment in the copyright law on June 21, 2012. That has changed the whole game because the royalty which was taken away from the composer or writer by the producer or music company has become non-transferable. Any contract in which royalty is waived off, is illegal. The Indian Performing Right Society (IPRS), a government-recognised body, will collect the royalties on behalf of the writers and composers. We are cleaning up the whole process and creating a database of Indian songs.

What made you turn an atheist and bring up your children (Zoya and Farhan Akhtar) as atheists?

Common sense. Let’s not confuse communalism with religiosity. You can be an atheist and communal. There are examples like (Vinayak Damodar) Savarkar, who were not religious but communal. On the other hand, there were people who were religious but not communal. It’s possible for an atheist to be communal, but it’s difficult for a religious person to be secular. There are people — businessmen, scientists, scholars and economists — who lose rationality when it comes to religion. That’s a strange and frightening reality.

As the debate over Hindutva grows louder, what role do you see religion playing in today’s polarised society?

Some time ago, you said that being Indian is to be in a minority today.

When people talk about identity, they refer to it through their religion, caste or language. No one says, ‘First of all, I’m an Indian’. Aur woh yeh baat keh bhi dein (Even if they do say that), they act like they belong to a certain community, caste or region. Very few people think objectively for the nation.

Do you think the true meaning of patriotism has gotten diluted today?

It depends. I love my house. Do I love my neighbour’s house as much? That’s not possible. In the same way, I have a certain loyalty to the city I am born and brought up in, to my mother tongue. But, I may not have met Mary Kom from the Northeast, and, yet, when she wins an international boxing bout, why do I feel happy? For me, it’s enough that she is an Indian. That’s a kind of nationalism. However, if it gives me an excuse to hate others, that’s wrong. Just because I love my house, does not mean that I will hate what belongs to others. I love my country, but I have respect for other countries. I don’t love my country because everything is perfect here. I love my father, brother and mother. Are they perfect? No. Similarly, there are shortcomings in my society. At the same time, you also have to be aggressive if your country is at war. If there is a threat, we will have to defend ourselves.

You try to correct misusage of language by pointing out mistakes in your tweets.

We underestimate the importance of language. I feel that language is stronger than religion. You are religious only for 10-15 minutes in a day when you pray. The rest of the time, you can communicate with anyone in the world if you know the same language. That does not work even if you belong to the same religion. Our tradition, culture, and art are all related to language. The moment you lose it, you lose your roots.

You were one of the creators of the ‘Angry Young Man’ in the ’70s, a character who was anti-establishment. Do you think he would have survived today?

I must say the establishment is trying its best to bring him back. The ‘Angry Young Man’ was a product of discontent and a lack of trust in institutions. I won’t be surprised if someone creates that kind of character again.

All You Who Remember Haifa: A look back at the battle that was