Mary Kom on punches, prayers and what still drives her

Boxing champion MC Mary Kom, with a record-breaking eighth World Championship under her belt, has the answer. 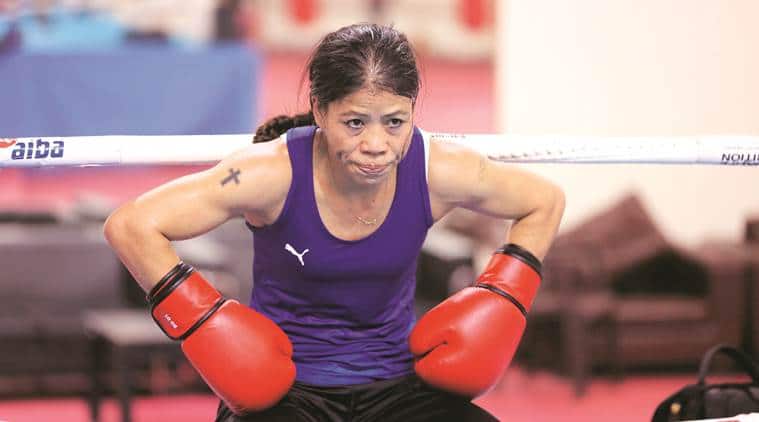 Queen of the ring: MC Mary Kom practising at the ring (Photo by Renuka Puri)

Mary Kom’s weekdays are exactly as hectic as you’d imagine: two lengthy sessions of Olympic-level training, duties of a Rajya Sabha member sandwiched in-between, and numerous media/promotional activities peppered throughout. Sundays are just as sapping (and inopportune), if not more.

On one such Sunday evening, we meet Kom, 36, as she arrives at her Khan Market residence. The children spill out of the car first, the exhausted mother is the last to alight. There stands Kom — the most successful boxer, male or female, at World Championships — dressed sharply in a salmon-coloured kurti and blue denims, her hair in a neat bun. As she yells after her children and motions the visitors towards the spacious office-cum-guest room, the exhaustion of another way-before-dawn, way-after-dusk day is evident on her face and slumped shoulders. She still manages a wry smile and a shrug: “Responsibilities,” she says.

Religion brings comfort even on busy days. Her religious commitments are a facet of her otherwise public life that has remained relatively unknown. It is also a part equal in importance to her in-ring exploits. After a childhood spent singing gospel hymns, Kom rues the many sessions she missed after taking up boxing at 15.

“Whenever I am in Manipur, in my village Kangathei, I visit our church. Everyone needs to believe in something, be it temples, mosques or gurdwaras. What I want to achieve in my life, I have to pray for that. Day or night, whenever, wherever we get some time, pray, even if it is a minute of worship,” says Kom, who spends her Sundays at the Komrem Baptist Church in the Capital.

“Going to church regularly is about connecting with other members of the community. People think we are celebrities, we live in a different way. But I live simply. So I keep checking in,” she says.

After the initial awkwardness is overcome, Kom says people feel at home with her. “Some people in the church are a little hesitant, a little shy. They know of me from TV or papers but they don’t know who I really am. So, you keep trying to talk to them every week. Eventually, they become friendly and I become one of them. I enjoy those interactions,” she says, her face lighting up. 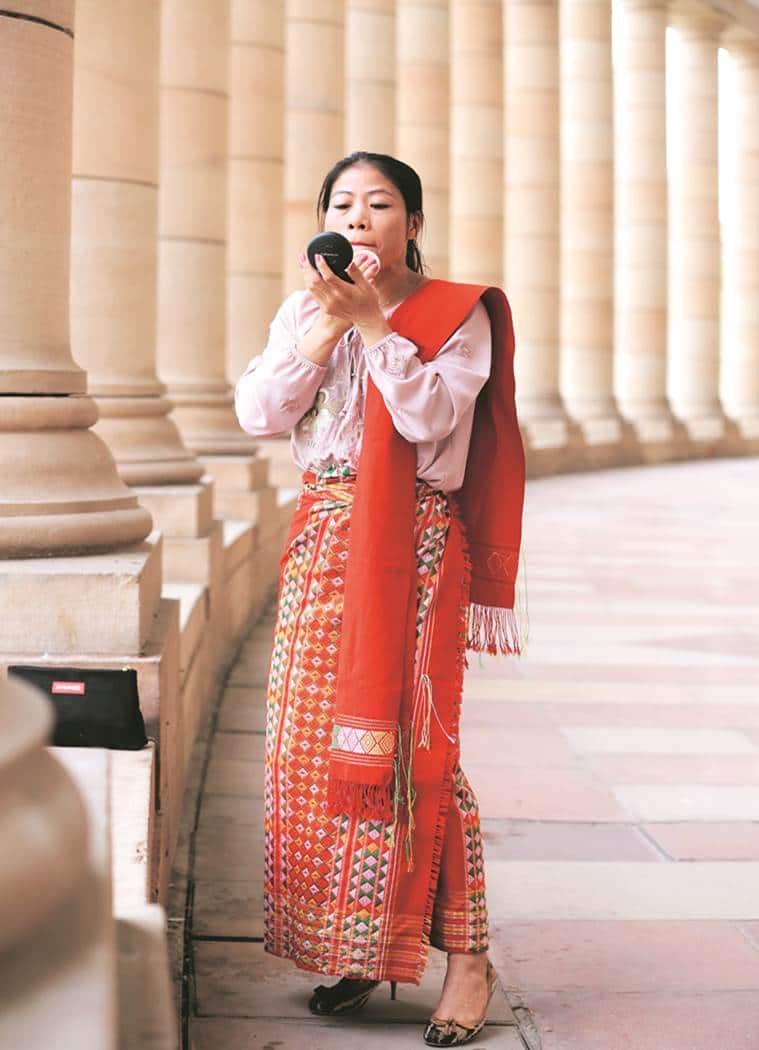 MC Mary Kom fixing her make-up in the corridors of Parliament. (Photo by Renuka Puri)

A proud, self-made champion, there’s something refreshing about her rattling off Biblical tales of David, Goliath and Samson as easily as she does her wins. She believes there’s a connection between the two worlds, or at least that’s what she tells herself before a boxing match. A fabled hero “going to war”, armed with dexterous skills and the knowledge that the almighty is always in her corner.

“In the ring, before I put on my head guard, I quickly go to the corner, and kneel,” says Mary, gesticulating to indicate what has been a ritual for close to two decades. “Just for a second, to send a message to God. If he is not there helping, supporting me, I will not be able to do anything. ‘Take my hands, my legs, my entire body. Help me if you want me to win. I am fighting for a cause. If you give me your blessing, they will praise you.’”

Surely, that’s more than a second? “I have said it million times, no?” she laughs. “A second is enough for a reminder.”

The cross tattooed on her right bicep is another reminder, as are the Olympic rings on the left. After no tattoos for 36 years, Mary got three in a day this June. There’s also the butterfly on her back.

“Float like a butterfly…?” I quote Muhammad Ali to her. “Sting like a bee, yes! After all, there’s no boxer who hasn’t been inspired by Muhammad Ali’s greatness,” she says. Kom contemplated getting tattooed when she took up the sport — “A simple boxing glove because I was a boxer” — and the closest she ever got was for a fellow national camper to jab her with a needle. “We didn’t know what a tattoo was and how it was made. It was very painful and I yelled ‘No no no! Stop!’” Kom guffaws. “These were done by a professional in Manipur,” she says.

Soon after she was done getting inked, she got a text: “Happy Olympic day!” “I went ‘What are you saying?!’” Kom jumps off the couch to drive the point home. “Now that’s a coincidence. Or maybe another sign,” she points to the sky. “At least that’s how I explain my success now.” Exactly a month ago, Kom got herself a bronze, her eighth medal at the World Championships in Russia to surpass Cuban legend Felix Savon’s haul of seven. Add to it the six world titles and a silver at the inaugural event in 2001. Her longevity can be explained by freakish genetics and endless hours spent training and sparring. Her success is often attributed to her experience in the ring, but Kom hints that the wisdom earned out of the ring is equally important.

“I never know what to say when people ask me ‘How do you do it, Mary?’ Bachche bhi bade ho gaye ab toh (twins Khupneivar and Rechungvar, eldest of the four, are 12 now). How can I explain it? After being asked this so many times, even I have started studying myself, thinking of the past and each win. I train hard, I don’t even sleep from morning to evening. It is difficult to explain, but there is more to it,” she says.

Last month, as photos started trickling in of the Indian contingent practising in the streets of Ulan-Ude, Russia, one figure was conspicuously absent.

“Last year, when the World Championships were happening in Delhi, the foreign teams came at least 10-15 days earlier because you need to acclimatise to the conditions,” says Kom. “We went three-four days before (the start of the tournament). It was so cold, I never went outside. Half an hour outside is not good. I trained in the hotel corridors. I don’t want to fall sick because I don’t want to risk my performance. At the end of the day, if you don’t win a medal, everyone will say your performance was not good. When you have to handle the blame, you need to take care of yourself on your own. But to be fair, I have learned all these through experience only.”

Kom is quick to juxtapose the sub-zero Russian conditions with the punishing summers spent competing in Hisar, Kolkata and other places in India in her early years. Women’s boxing was yet to be included at the Olympic Games, and Kom, already a four-time world champion by then (2008), travelled by buses or sleeper-class trains because “the AC tickets weren’t reimbursed”.

“We stayed, trained in the heat, under ceiling fans. Kya haalat thi! People would faint, be dehydrated during weight cuts at the events, no physios, no doctors, no proper diet, just whatever we got at home or the camp,” says Kom. “But I can’t blame the situation. It’s okay, past is past. Boxing was not there at the Games. So that struggle was always there,” she says.

Then came the historic bronze at the 2012 London Games. “Sometimes, we should sit back and think Olympic mein medal nahi laati toh kaisa hota (What would it have been like if I didn’t get an Olympic medal?) The number of girls who want to box now, it’s a good sign. You always need an idol, not just in boxing but in other disciplines, too,” she says. Kom believes the biopic two years later helped, too, even though the sanitised, dramatised depiction had no hope of truly capturing her visceral struggle.

“Bachpan mein, khet mein ladka jaise kaam kiya, vo kya acting kar paayega koi (As a child, I have laboured in fields like a boy. Can anyone act that out)? You can’t do it. They did their bit, and it was a good thing. But you can’t really capture the moments along the way. You need to live that life to understand it fully,” she says.

The struggle now is to ensure life is relatively easier for young dreamers, starting with the 50 girls and as many boys at the Mary Kom Academy, spread over 3.3 acres in Lamphelpat, Imphal, with a hostel across the road to boot. It is her way of giving back to Manipur.

“We couldn’t dream of such a facility when we started. That’s the change that is required — world-class equipment, live fitness gyms. Thankfully, some sponsors have also come on board,” says Kom.

“We are also winning many medals (19 gold, 10 silver and 14 bronze at state-level, according to the Facebook page). The students we have are juniors, sub-juniors. There are fewer senior boxers because they get their training and then join other departments. They want to get jobs, I can understand their priority,” she says.

Adored as an icon in her region, Kom has also had to face resistance from a section of society. “In Manipur, there are several communities. So, even after my achievements, there are people who don’t appreciate the growth of the Komrem community,” she says.

“It’s baffling because when I fight, I represent India, the Northeast and Manipur. It’s never been my intention to represent one community over another. Getting this academy started was a lot of trouble. Even now, it’s tough because I am not there all the time. But it came along at the right time,” she says.

Another query that leaves Kom fumbling for words is what keeps driving her at this stage of her career. There’s the elusive Olympic gold and a possible seventh World title, which would leave Savon behind in another tally. On this day, however, an unguarded, pensive Kom brings up the dreaded R-word herself.

“Ek din toh retirement ka time aayega hi na (Eventually, there will be a day when I will have to retire). Then I will be another retired sportsperson, not an active athlete. That makes a difference. If I am not doing these things right now, when I can bring attention to my academy and other issues, it will be very difficult later. Laying the foundation for things is the important part. Later on, you keep refining, adding things,” she says.

But has she contemplated life after hanging up the gloves?

“Hopefully, away from the media,” she says, with a laugh. “A lot more time at the academy and the church.”

More boxing and Bible? “More punching and praying!” she fires back with a smile.