How a zen-like Gaitonde practised minimalism in life and art

With his 1961 canvas selling for Rs 39.98 crore last month, he set a new record for Indian art worldwide. But, as in art, so in life, for VS Gaitonde, less was always more A SHORT WALK from Humayun’s Tomb, a one-room barsati in Delhi’s Nizamuddin East was Vasudeo S Gaitonde’s home for over two decades. It is where he would spread his canvas and paint for hours — dipping his brush into pigment, tearing pieces of newspapers to transfer the colour. There would be no distractions, not even a doorbell. When visitors would come, they would shout out for him and he would open the door to let them in — or not — depending on his whim.

“The way he painted corresponded with how he lived — in a minimal setting, with few friends. Perhaps, the boldest artist of the period, in pursuing the abstract form he had chosen a path that was distinct from his contemporaries,” says friend and gallerist Arun Vadehra. He recalls his first meeting with the artist in the mid ’70s. Accompanied by cultural preservationist Aman Nath, he climbed up Gaitonde’s barsati, only to be turned away. “He told us he was busy doing nothing. It’s much later that I realised that doing nothing was not easy from the point of view of Zen philosophy,” recalls Vadehra.

In 2015, when one of his last works completed in the Nizamuddin studio — a radiant golden 1995 canvas — came under the hammer for Rs 29.30 crore, it set a record for the highest selling Indian artwork. Most recently, on March 11, his 1961 untitled oil in tones of blue with darker shades dividing the canvas, fetched Rs 39.98 crore at a Saffronart auction. “We knew it would do well because it was a beautiful painting, but we were extremely pleased with the result,” says Dinesh Vazirani, co-founder and CEO of Saffronart.

Dancer Aditi Mangaldas, who owned this VS Gaitonde canvas with her brother Aditya Mangaldas, says, “The painting was a silent but extremely beautiful and powerful spectator of all the happenings in our family, the ups and downs in our lives. It is something that informed our aesthetic landscape while I was growing up in Ahmedabad… To me, initially it was an intriguing beautiful splash of colour, an ocean of blues with this incredible red dot. I used to wonder what is the broken black square on the side. As a child I remember trying to find my own narratives.”

While a solo dedicated to him at New York’s Solomon R Guggenheim Museum in 2014 was testament to his eminence, Vazirani enumerates how enquires for Gaitonde’s work far exceed the availability. “An artist with an incredible skill and mind, he is one of India’s leading abstractionists and is paralleled with Mark Rothko internationally. Every serious collector wants at least one Gaitonde and with several of his works now in strong collections, there are few available. He would have painted not more than 400 canvases in his lifetime,” says Vazirani. Born in Nagpur in 1924 to Goan parents, Gaitonde was five or six, when his father quit his job at a printing press and they moved to Mumbai where they lived in a chawl in Girgaum. In Meera Menezes’ book Vasudeo Santu Gaitonde: Sonata of Solitude (Bodhana; 2016), his younger sister Kishori recalls how her brother “Bal” made sketches for his older sister’s school assignments. “Every so often, he would accidentally dip his brush into a cup of tea, lovingly prepared for him by his mother. However, he knew that his father disapproved of his interest in the arts and he painted only after his father had left for work,”
writes Menezes.

It was watching some family members paint the walls of the Saraswati temple in his ancestral village that sparked his interest in art. He would go on to study at the Sir JJ School of Art, Mumbai. Immersing himself in Indian miniatures, Gaitonde’s works in the ’40s and ’50s were often figurative with geometric explorations and bold colours evocative of Basohli paintings, the school of Pahari miniature painting that flourished in the 17th and 18th centuries. “I was influenced by Indian miniatures, and my sense of colour was weak. So I started copying the miniatures. Their vivid vital, vibrant colours attracted me. Soon to study the colours more closely, I started eliminating the figures and just saw the proportion of colours. I experimented with this because figures can bind you, I just took patterns instead. This step marked the beginning of my interest in colour,” the artist had said in a 1985 interview for The Patriot.

As the lines blurred and imagery became more fractured, the geometric forms and colour gradations achieved a certain lyricism and the mid ’50s saw the birth of the “non-objective” style. The paintings in the later years reflected his spiritual leanings — from the philosophies of Jiddu Krishnamurti, whom he listened to during open-air discourses at the Sir JJ School of Art, to teachings of Ramana Maharshi and the tenets of Zen Buddhism.

Hailed as a “genius” by MF Husain, Gaitonde was inducted into the famed Progressive Artists’ Group, where SH Raza, FN Souza, KH Ara and others came together to develop a distinct artistic vocabulary in young India. “Gaitonde chartered an independent course, consciously choosing not to give visual expression to social and political causes unlike some of his peers. Instead he would plough the furrow of non-representational art all his life. His influence has been gentle and insidious, seeping into the works of artists like Nasreen Mohamedi, Laxman Shrestha and Prabhakar Kolte,” says Menezes.

While Raza’s expressionist landscapes would develop abstractionist overtones by the ’60s, and Akbar Padamsee would paint his mythical landscapes in the early ’70s, Gaitonde’s non-representational canvases had already begun to receive global recognition by the mid-’50s. In 1957, his canvas The Bird and an Egg was exhibited at the Young Asian Artists’ Exhibition in Tokyo. After shows in New York in 1959 and 1963, he was awarded the prestigious Rockefeller Foundation Fellowship in 1964, to spend a year in the city, where he observed, at close quarters, abstract expressionist art of the likes of Adolph Gottlieb and Helen Frankenthaler. Occupying a room next to him at Hotel Chelsea in New York, friend and artist Krishen Khanna recalls how the two would often go on long walks and visited Mark Rothko at his studio. “He (Rothko) was very affable and showed us the black paintings that he was doing,” recalls Khanna.

There was a radical shift in his oeuvre when he returned to India via Japan. It was during this period that he experienced heartbreak when his love interest, Prafulla Joshi, with whom he had shared a studio at Mumbai’s Bhulabhai Desai Memorial Institute in the ’60s, married Dilip Dahanukar.

The institute was a nucleus of all arts in the ’50s. This is also where thespian Ebrahim Alkazi pursued theatre, Pandit Ravi Shankar his sitar, and where MF Husain and Tyeb Mehta had their studios. Though Gaitonde chose to rent a studio at the institute again in the late ’60s, the residents had changed — among others were Sir JJ School of Art student Nalini Malani.

Gaitonde’s own source of inspiration and corner for contemplation was a bench outside the building that looked into the sea. He would spend hours gazing at the changing tides and the setting sun. He would miss this when the soaring rents in Mumbai drove him to Delhi in the 1970s. “He still came to Mumbai during the monsoons,” says Vazirani. The change in location also perhaps subconsciously reflected in his works. “The quietude of the water disappeared. There was a lot more calligraphy and movement in his canvases from the ’70s,” adds Vazirani.

By now, Gaitonde was largely working on vertical surfaces and the hieroglyphic markings turned into amorphous shapes. His tools included paint rollers, palette knives and magazine pieces that he used to create abstract forms through the “lift-off” technique. Explaining the process of his work, Gaitonde had once said: “I don’t work. I relax and wait, and then I apply some paint on canvas. The most important part of painting is waiting, waiting, waiting.” 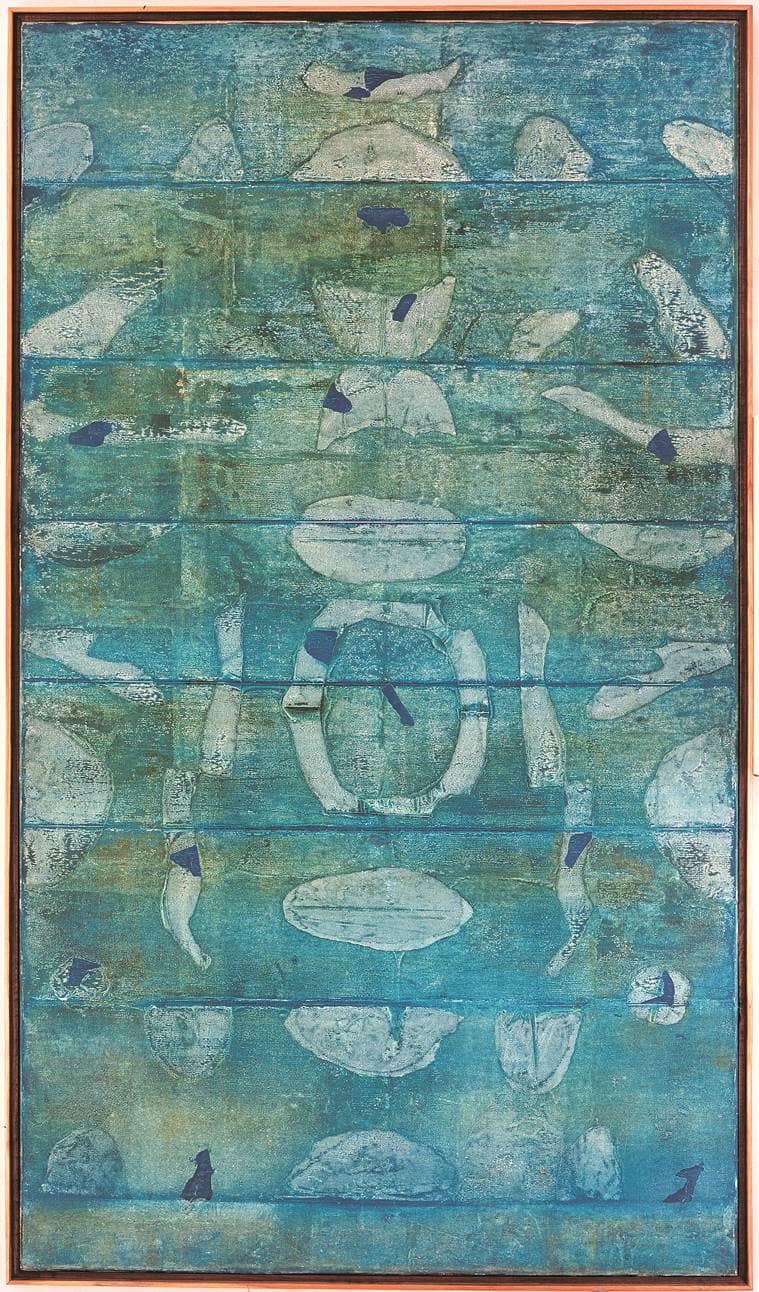 When he shifted to Delhi, Gaitonde cut ties with his family but held close his small circle of friends. His neighbours in Nizamuddin included Ram Kumar, Krishen Khanna and Tyeb Mehta. Khanna recalls the many evenings they spent discussing music, literature and poetry over a drink. Vadehra, Husain and Khanna had once pooled money to buy Gaitonde a new television set. “He loved to watch television. I once asked him how do you start a painting? He said, ‘I get my inspiration from the TV’,” says Vadehra.

Though Gaitonde preferred solitude and remained oblivious to the dictates of the art market, his works travelled the world, entering prestigious museum collections. The Padma Shri awardee’s artistic pursuits were to come to a screeching halt when an auto accident in the mid ’80s resulted in a spiral injury. Gaitonde was forced to forsake large canvases for smaller works on paper. While the silence in his work became more profound, he subsequently drifted towards more calligraphic and rhythmic movements. It took him more than eight years to return to the canvas. “His last paintings were more complex, in which several colours had become more symphonic. Unfortunately, he did not live long enough to pursue that,” says Khanna.

The monastic lifestyle he led did not imply he did not know how to live large. He often travelled between Bombay and Delhi in a first class air-conditioned berth. A cinema buff, he watched Bollywood with Husain during his Mumbai days and never missed a Anthony Quinn film. Khanna recalls how he enjoyed meals at Delhi’s Karim’s as well as Frederick’s, an expensive Chinese restaurant in Colaba. Menezes notes, “Although much is made of Gaitonde’s reclusive nature, his brusque and forthright manner and his love of silence, he could be gregarious and fun-loving with an impish streak of humour. He could be spartan and yet he loved the good things in life — the opera, a good meal at a restaurant and a finely tailored suit.” When the non-conformist hermit passed away in 2001 at 77, his finances were meagre but he had the respect of friends. “There would have been around 10-12 of us at his funeral. I called Bal (artist-collector Chhabda) and told him Gai was gone. He told me ‘put in a log for me too’,” says Khanna.