Homes That Built Me

The houses we live in can mould our ideas of space and impact our imagination. 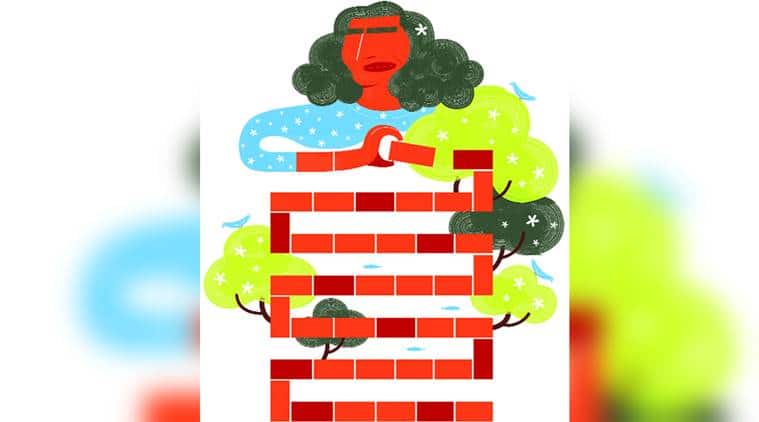 Every home that has been lived in teaches us a little about ourselves and how we grow in each space. (Illustration: C R Sasikumar)

Our creative imagination is a collage of memories put together from our real and imagined experiences. As architects, very often our designs may be reflections or recollections of these memories. Their form and shape may not be defined, but may be more like hazy outlines, of places and incidents gone by. Colours, sounds, smells and scale form a rough outline of these experiences.

My parental home was an eight-storeyed apartment in Mumbai, where we lived on the top floor. From there, the line of sight went above the few trees in our vicinity — coconut, copper pod and gulmohar. Faces could still be recognised and voices heard from this height, unlike the new apartments which go much higher. But our play spaces, or rather, the lack of them, were dependent on innovations. From hide and seek in the stairwells and the car parking area to a tent that we built with bedsheets under the shade of the lone badam tree in the corner of our compound, here were the venues of many meetings, secret societies and other fantastic worlds that we created.

As teens, the boundary wall between our apartment and the next (even though it was almost six feet tall) became the “adda”/ courting space, much to the chagrin of the conservative adults in the neighbourhood. Feet dangling from the wall, munching on peanuts, we would watch the world go by, while stealing glances at the boys playing cricket or showing off in some teenage way.

The seaside promenades that dot Mumbai became our go-to places as we grew into young adults. The vast ocean freed our minds and allowed us to delve into our personalities, and dream about our lives ahead. The anonymity of the public space — large, crowded, unknown, yet within a short walk from the street that we lived on — let us securely escape, and explore the world around. Perhaps, the significance of recreating these scenes — which were not necessarily formal, became an important part of my explorations as an architect.

Moving to Kochi in 1993, as a young architect and bride, was an entirely contrasting experience. Its verdant green environment, with houses and their yards arranged on incredibly narrow streets, was a whole new world — the stifling humidity and the romantic rain, viewed from the essential verandah that took a different form in every home. Shoes, easy chair and thinnai (verandah space) mingled with politics, tea and palaharam or snacks. For me, understanding the organisation of the front and rear yard, the obsession with the “work area” or utility space behind the kitchen and the large rooms — very sparsely furnished, if at all — promptly added to my understanding of a home and a way of life. Vegetables that I had so far only seen in the market, were now available on our own plant beds — the backyard was a veritable treasure trove of curry leaves, bananas, chillies, to name a few offerings.

I felt that a lot of large homes created too much privacy. The abundance of space in large homes could be liberating and alienating at the same time. Thus, in the homes that I designed, I always tried to create more connections, less walls, and, many verandahs. The crafting of the Kerala home, with its human scale and proportions, the exquisite woodwork, strong roof forms, and its response to climate — all these forever became a part of my way of thinking.

I had to move to Bengaluru in 1995. Its wonderful climate and the landscape — its colonial ambience and expansive parks, in the early ’90s — gave a different flavour to city life. We lived in a low rise apartment complex on the outskirts of the city. It was an intricate network of blocks, levels, courtyards and terraces. With balconies or verandahs leading out of every room, it expanded the home, in many dimensions. From the ability to grow plants and even vegetables on the balcony, to being utilitarian, in the drying of clothes, extended work space, or, being close enough to the neighbours to exchange a few pleasantries, if inclined to do so. Climatically conducive, the verandahs protected the rooms within and also allowed for a greater degree of privacy.

After spending a decade in Bangalore, growing as a family, we made the brave decision of designing and building our own home in a community. It was to be a community of friends, a place to drop anchor and bring up our children, where we could make sustainable choices and experiment further with alternatives in urban life. The design of our home encompassed all the memories of our past homes — of being cosy and compact, of flexibility and growth, of nature and spending time outdoors. Some features were more direct interpretations of our previous homes — the long verandah, or, the arrangement of the bedrooms which were adjacent to each other.

Every home that has been lived in teaches us a little about ourselves and how we grow in each space. A sense of rootedness and of family, of children growing up and adults growing old, and, changing contexts and family structures — all the intangibles that today’s homes need to respond to.

Natasha Iype is an architect based in Bangalore, who has been involved in building sustainable communities, for GoodEarth.