From My Grandmother’s Kitchen

Rice dishes struck a chord with her, especially tehri. 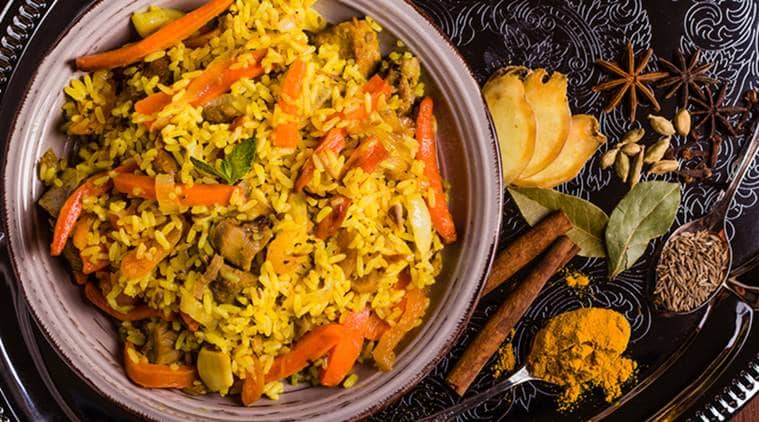 There will always be rice: Culinary lore ascribes the origins of tehri to the kitchens of the Afghan rulers, who preceded the Mughals in north India. (Getty Images)

My grandmother left Jessore, in what is today Bangladesh, for Lucknow when she was in her early 20s. Almost 50 years in north India could scarcely make an impression on her linguistic skills. She had only a passing affinity with Hindustani and spoke it with great reluctance. At times, I thought her attitude to the language of her adopted home bordered on obstinacy. But, perhaps, I was unfair. Maa — as I’d call my grandmother — was, in any case, a person of few words. And her affinity to the culture of the lands she lived in for three quarters of her life did find expression in other ways.

In her kitchen, my grandmother was somewhat of a purist. But that did not stop her from extending her culinary oeuvre to the food of the places she lived in. Some of her choices may also have been due to the ingredients that were at hand. Lucknow had Bengali quarters, but even there, she would tell us, the varieties of short-grained rice used at her native place were not easily available. However, the rice dishes cooked by some of her neighbours struck a chord with her.

Amongst them was a staple Maa would rustle up on the days when she did not feel up to preparing an elaborate fare. Rustle up is perhaps the wrong expression. For my grandmother would take care to dice cauliflower florets in equal sizes; the carrots, beans and other vegetables, too, were treated with the same precision. Waving away any offer of help, Maa would summon the strength in her frail frame to haul the deep copper degchi she would use on such occasions, lavish it with dollops of ghee, and as soon as the flames began their work, a stick of cinnamon, pods of black and green cardamom, a bay leaf, and some cloves would enter the fray. The fragrance would signal that Maa was cooking her favourite one-pot dish — tehri.

The aroma would also be a wake-up call for the rice that had been resting in water for about an hour. As if in protest, the grains would let out a premature sizzle on first contact with the ghee. But their anger was momentary. For Maa would make sure that each grain of this pre-soaked rice was infused with the fragrant ghee. Once the rice was at home in the vessel, it was time for some colour. My grandma would sprinkle some turmeric, and as if to check the yellow from getting too exuberant, she would spoon in some ginger, add the green vegetables, halved potatoes and some water. The smorgasbord of colours would be left to slow cook over a low flame.

Culinary lore traces the magic in my grandmother’s kitchen to hearths in medieval Persia. According to this version, Persians would cook rice in salted water for hours “so that it would glimmer like crystals”. Another account ascribes the origins of tehri to the kitchens of the Afghan rulers, who preceded the Mughals in north India. In another narrative, the dish was a pulao option for the vegetarian book keepers of the nawabs of Awadh. The dish has also been attributed to the famine relief works of the Awadh nawabs. The cooks of the royal kitchen substituted mutton with potatoes, and thus was born tehri, goes this account.

This is what makes culinary history so interesting — it’s difficult to settle on one account of origin or establish authenticity. My grandmother, on her part, did not completely dissociate her favourite one-pot dish from the land of her birth. In East Bengal, she would say, mustard oil took the place of ghee, the green chilli would be the predominant spice, and most importantly, curried meat would perform the part of the vegetables.

Years after Maa left us, I tasted this robust dish in a village in Bangladesh’s Barisal district. My hosts were quick to dismiss my casual suggestion that the meal they had offered me was akin to biryani. The “taahiri” does not involve par-cooking the rice and semi-cooking marinated chunks of meat before layering both and cooking them together, they told me.

That difference had not, actually, escaped me. But what struck me most was that my hosts pronounced the dish almost the same way my grandmother would. For years, I had thought by calling tehri, “taahiri,” Maa was only betraying her characteristic diffidence towards the Hindustani pronunciation.

Gulammohammed Sheikh : An artist of the changing world