From Babur to Jahangir, how the Mughal empire enriched Indian cuisine 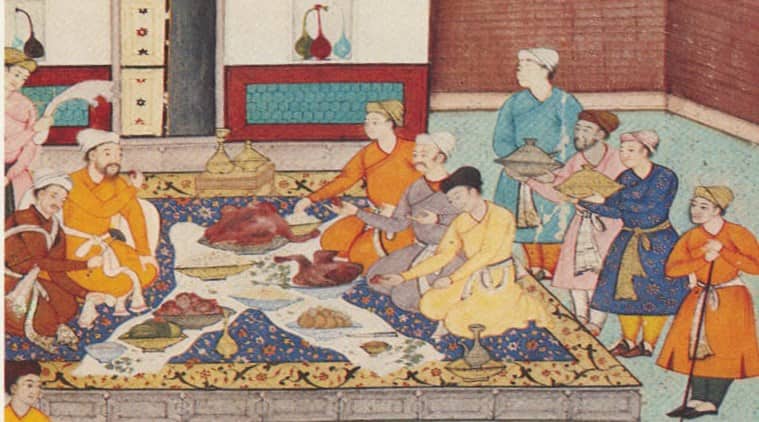 Babur, by all accounts, disapproved of most things he found in India. “Hindustan is a place of little charm,” goes an oft-quoted line from his autobiography, Baburnama. A lot of the scorn, the first Mughal emperor poured on the land he had conquered in 1526 owed to his being a food snob.

“[There is] no good flesh, no grapes or muskmelons, no good fruits.. no good bread or food in their bazaars,” he grumbles.

The emperor’s autobiography begins with a description of Fergana, the Central Asian province of his birth. Food has a prominent place in the account: “The pheasants get extremely fat, and it’s said that not even four people can finish eating a stew made from just one…Pomegranates and apricots are superb…One type of pomegranate, [is] called big seed, the sweetness of which has something of the taste of an overripe apricot”.

But to Fergana, Babur could not return. He had been driven out of the land of his birth when still in his teens. To Kabul, “the pretty little province”, he had conquered before setting his sights on India, and for which he pined, the emperor would go back only posthumously.

One of the responses of the first Mughal emperor was to establish supply chains that brought the food of his native lands to India. In Curry: A Tale of Cooks and Conquerors (2006), historian Lizzie Collingham writes that, “towards the end of his life, Babur discovered that it was possible to cultivate grapes and melons in India but the taste of a melon made him feel so homesick that it reduced him to tears”.

Babur is a much-reviled character amongst a section in the country today — an invader, a destroyer of places of worship. “Babur ki aulad,” is an abuse a section of people heap on Muslims in India. The dynasty that he founded is often the target of opprobrium. But if culinary artefacts are amongst the touchstones of a culture, there is much to be said about the 300-odd years which Babur’s successors ruled over India. 1526 inaugurated a phase in which Central Asian and Persian styles of cooking were brought to India and pooled into the existing medley to create much loved elements of our cuisine.

Another act of exiling had a significant role in this culinary synthesis. When Babur’s son Humayun was driven out of India by Sher Shah, he sought refuge in Persia. Unlike his father, the second Mughal emperor employed Indian cooks, who, according to Collingham, regaled the Persian ruler with a “dish of rice and peas, an Indian version of the khichari”. The fascinating give-and-take with the rice-and-pea dish and the Persian pilau leading to the birth of the biryani eaten in several parts of the country is part of culinary lore.

On his return, Humayun brought a large number of Persian cooks, who imported into India a cuisine developed over centuries. The Ain-i-Akbari, an account of his son Akbar’s rule, lists recipes that used large amounts of saffron and asofoetida (hing). The Mughals cultivated these plants to provide their cooks with a ready supply. Writes Collingham, “Hing became popular with the vegetarians in the country. When it was cooked in oil it took on a garlicky flavour, which made it a good substitute for onions and garlic which were avoided by devout Hindus”.

Humayun’ son, Akbar, unlike his grandfather, developed an affinity for manners and customs of the country. The third Mughal emperor, writes his son Jahangir in his memoirs, the Tuzk-i-Jahangiri, went days without meat. The khichdi was something he would turn to then. The rice-and-lentil fare was also Jahangir’s go-to-dish during his battle against alcoholism. His austere grandson, Aurangzeb, was, in fact, so fond of khichdi that he gave the dish his name, the Alamgiri khichri.

With Jahangir, in fact, the Mughal attitude towards food products in India came a full circle. “Notwithstanding the sweetness of the Kabul fruits, not one of them, has to my taste, the flavour of the mango,” the fourth Mughal emperor wrote in his memoirs. The Mughals, in fact, took to the fruit with gusto. Food historian K T Achaya writes in The Illustrated Foods of India (2008) that “Mughal patronage played a notable part in encouraging mango grafting”.

The potpourri of influences that is Indian cuisine would be poorer without what happened during Mughal rule. It’s not for nothing that “Mughlai” is a section in menus of a variety of eateries in the country — it’s another story that most do not do justice to the magic that happened in the Mughal kitchens.

This article appeared in the print edition with the headline ‘Bon Appetit! Fergana’s Flavours’

‘The core of a writer doesn’t change much’