Born before Bangladesh, she grew up with the idea of the world as a global village, where religion and nationality only play supporting roles My music teacher, Marina Ahmad, who was a part-time resident musician and performer in Mumbai and lives in New York City, was born in Bangladesh to Faqueer Shahabuddin Ahmad and Ayesha Akhtar of Dhaka. Faqueer Shahabuddin Ahmad was the first attorney general of Bangladesh and an author of its constitution. Ayesha was his wife and mother of their seven children. Music resided in their blood, and they had Marina taking lessons in classical music from a very young age and studying under Pt Vinaya Chandra Maudgalya in Delhi in her early teens. A chance meeting in an elevator with Pandit Jasraj took her to Mumbai at 22 and from there she arrived in New York City in 1991.

Marina, who was born before Bangladesh came into being, in what was then East Pakistan, was ingrained in her father’s steadfast belief in the importance of nationalism that wasn’t jingoistic and socialism that cared for all who were part of the shared geography of her nation, adopted or that of birth. She and her siblings were told that they were Bangla and Bangla alone, that religion and nationality were nuances that played supporting roles. She was taught to think of the world as a global village, to hold to heart the gift of democracy and to guard it with the exercise of voting in elections and ensuring others did as well. Marina’s parents fostered in their children a deep understanding of what secularism is all about and how it gives a link to others despite the man-made borders that divide humanity across geographies.

ALSO READ |‘My generation gets to paint the picture of a Bangladesh where women scientists have the agency to design their own futures’: Senjuti Saha

Marina brought these ideals to our classes in a most natural manner. Any physical or virtual session with Marina always taught my guru-behens and guru-bhais the importance of modesty and generosity, of caring and nurturing. Grace, patience and acceptance seemed to be generationally abundant in her life, and nothing we could do would make her angry or upset. Rather, she would see the positive in every situation and bring the focus back to teaching and inspiring, encouraging us to catch the notes we weren’t quite able to grasp or reach. When it wasn’t the notes that were the issue, but something else was distracting one of us, most discreetly, and when no one else was around, she would find the student in question and provide healing care and all necessary support. We learnt music not just through repetition of songs and nuanced study of their rendering, but by focusing on the emotions that could change the delivery to be heartfelt and moving to the listener.

My tutelage with Marina showed me a wonderful way to have all barriers created by man quashed and rendered moot. In her home she had art and curiosities from across the world placed together and sometimes abutting one another or even covering parts of one another. They were statuary and objects collected for the memories they invoked and not to follow any patriarchal constructs of hierarchical religiosity or other divides that could easily create barriers where none need exist. In the homes of students, Marina was always excitedly accepting of their unique styles and predilections, growing as a person with every new personality she encountered. Becoming bigger and more patient as she found herself challenged and her thinking and way of being put to the test.

I was the first gay man Marina encountered in her life, and even before her son Rishabh came out to her, she would chat with me about her observations of him and his personal journey. Her insight in dealing with his struggle patiently and without meddling astounded me and made me further realise how indulgent and peerlessly thoughtful and mindful Marina is. Of course, his coming out was easy-breezy as she had known about it for some time, and as she put it, Suvir Mama had paved the way and made it seem as normal and natural as it ought to have been.

Marina teaches her students that music is about letting go of all that consumes us and becoming one with the raga we are singing. When we become the raga and song, it is that surrender that makes our music seem most lucid, memorably correct and soulfully circumspect.

This grandiose way of being and thinking is what connected Marina to her parents and to her nation’s constitution. She found in Bade Guruji a kindred spirit to the father and nation she dearly missed. Through her tutelage from Pandit Jasraj, Marina was given living and breathing examples of those ideals that the founding fathers of Bangladesh had so carefully and thoughtfully enshrined into the Bangladesh constitution and always wished for its men and women to value.

As I mark with glee the 50th anniversary of Bangladesh’s nationhood, I cannot think of a more formidable citizen to remember than my guru, Marina Ahmad. Hers is a tutelage as grand as the best education one might imagine gleaning at a hallowed institution of yore. That it is being given to students across the many seas, in countries east, west, north and south of Bangladesh as Marina travels between homes in New York City, Mumbai and Dhaka, is the gift of the 21st-century Wi-Fi and access to high-speed internet. That Marina herself continues to be a student is what makes her a peerless guru and the best teacher any student could wish for. Always restless to learn and discover, she has teachers in India, Bangladesh and Pakistan. She has received formal training in Carnatic music, semi-classical music, Rabindrasangeet, and Nazrulgeeti. For the last 17 years, she has also been studying under Manik Bhide of the Jaipur-Atrauli gharana. Marina, in many ways, is everything that her parents had wished their children and those of their young nation would grow to become. Proud Bengalis, with confidence, character, hunger for discovery and curiosity to keep learning and growing, secular and accepting to the core.

ALSO READ |Bangladesh @ 50: ‘Will you give me a flag of Bangladesh?’

As Bangladesh makes its own mark in geopolitics, Marina Ahmad performs globally at venues big and small and enthralls audiences of many ethnicities and nationalities with her heartwarmingly soulful smile, husky voice, sonorous tones, and dulcet notes. Her performances worldwide, her sharing stage with Grammy-award-winning artist Youssou N’Dour, her recorded albums and singles, her rendering of Sufi music, her work in creating Udgam, an NGO that keeps Hindustani classical music alive in the greater NYC region — these keep Marina center stage as a musician with both talent and a soulful heart and with a mind that thinks beyond comfort and looks at work and the world as an investment in self-growth and also human fraternity.

Seeing and learning from Marina and how she is carrying forward Bade Guruji, Pt Jasraj’s legacy of singing and teaching in a secular manner, has given me hope about music providing societies the bridge needed to overcome divides that can maim a people, tear nations apart and leave the world crippled. The notes Marina reaches and touches, the way she carries divinity in her voice and her actions and how she makes her music an anthem for human unity, make her a Bangladeshi woman who makes that young nation come alive in a most wonderful manner on the world stage.

Bangladesh at 50 has in Marina a daughter who with her incomparable voice makes the nation of her birth proud; who enriches her nation of citizenship, the US, with her sweat and teachings; and who, through her support of musicians and music aficionados, keeps classical music annals of tutelage and performance alive and proud in India, her nation of inspiration. As I think of Bangladesh and its 50th year of independence, I cannot but bow to my guru Marina Ahmad and her musical talents and thank her parents Ayesha Akhtar and Faqueer Shahabuddin Ahmad for the gift they have given to the world, through their example and their daughter — a person in whom the world can see all that is glorious about Bangladesh and the fraternity of free nations worldwide.

(Suvir Saran is a chef, author, educator and world traveller)

Taapsee Pannu’s Looop Lapeta heads for a Netflix release, actor says ‘it is time to run’ 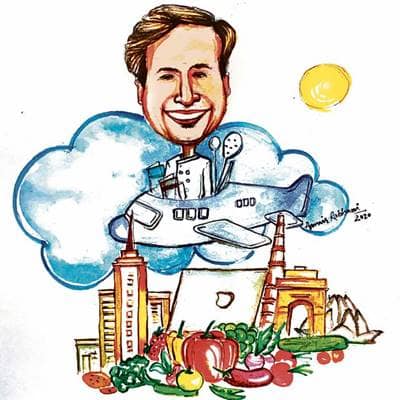