Express Investigation: Qatar World Cup kicks off in a month, spare a thought for these men

In the shadow of the Qatar World Cup will be the stories of migrant workers from India who poured into the Gulf state to turn this unlikely desert destination into a global football hub and returned home to their families in villages from Bihar to Punjab and Telangana — in coffins. 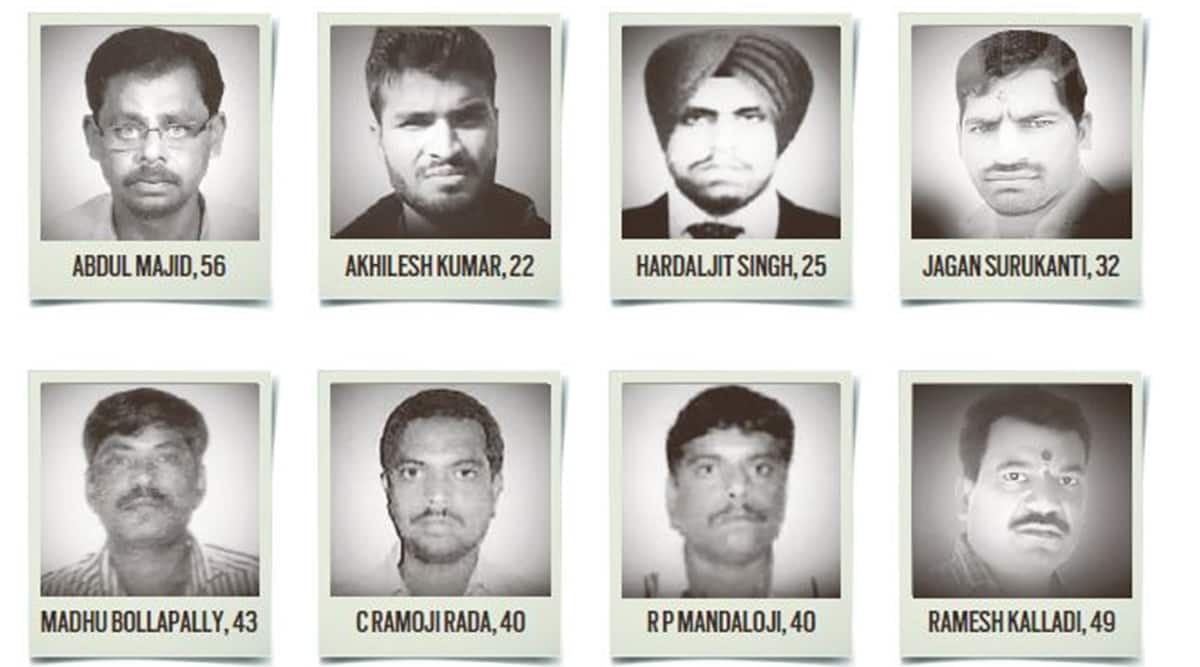 No compensation, say families of Indians who died in Qatar working on projects linked to FIFA World Cup.

Exactly a month from now, as the football World Cup begins, all eyes will be on the glittering 60,000-seat Al Bayt stadium in Doha, an architectural marvel that, in its nomadic tent-like frame, pays tribute to Qatar’s past and future.

In its shadow, however, will be the stories of those migrant workers from India who poured into the Gulf state to turn this unlikely desert destination into a global football hub and returned home to their families in villages from Bihar to Punjab and Telangana — in coffins.

Over eight months, The Indian Express investigated official records, interviewed job agents, migrant welfare activists and local officials across the country, and filed Right to Information applications to track down the families of migrant workers who died in Qatar while working on projects or in jobs linked to the World Cup.

A labour recruitment drive in Metpally, Jagtial district, Telangana. Around 200 people were interviewed for a job of cleaner at buildings to accommodate World Cup visitors.

The newspaper spoke to the families of nine of them, met some at their homes, and found that they have been left in the lurch, struggling to pick up the pieces of their broken lives and battling deepening financial distress. They also had a common complaint: no compensation and a wall of denial from their employers.

In seven of those families, the workers who died were the sole breadwinners. Most of them were men of working age and have been shown as dying mainly due to “natural causes”. Three of the nine workers were under 30, including one just 22 years old, and five others under 50. In more than half of these cases, families say, there was no prior medical history, and that they came to know of the deaths through friends or colleagues of the workers in Qatar.

“We were not informed about my husband’s death by his employers. I first came to know about his death from a friend in our village who was informed by an acquaintance in Qatar,” says Savita Kumar, whose husband Akhilesh (22), a plumber from Sallahpur in Bihar’s Siwan, was trying to fit an underground pipe near a World Cup venue just outside Doha last year when the earth caved in.

Akhilesh was one of the two Indian workers who died in that incident. The other was 32-year-old Jagan Surukanti from Mallapur in Telangana. “I only know that my son went there fully fit,” says Jagan’s father Rajareddy, 59, fighting back tears. “And he returned in a box.”

The Indian Express traced eight of the nine employers involved to ask about their norms for compensation and support for the affected families. Seven of them did not respond while one could not be reached either by email or phone.

Madhu’s wife is now a beedi roller, son a labourer.

Contacted by The Indian Express, the Supreme Committee for Delivery and Legacy, the Qatari official organisation in charge of delivering the World Cup, flagged a total of “three work-related fatalities and 37 non-work-related deaths” of workers from across the world in projects linked to the tournament.

Posters paying tribute to Surukanti Jagan, one of the many migrant workers who died in Qatar, hang all over his village Chittapur in Telangana

Responding to an RTI query from The Indian Express on the number of fatalities among Indian workers linked to World Cup projects since Qatar won the rights to host the tournament in 2010, the Indian Embassy in Doha said in May 2022: “Information is not available with the Embassy of India, Doha.”

The Embassy did not respond to a questionnaire emailed by The Indian Express on Tuesday listing the nine workers it had tracked down along with the passport numbers of eight of them.

Read |Doha responds: Some progress in reforms, long journey ahead

FIFA, football’s world governing body, did not respond to queries from The Indian Express seeking comment on the deaths of Indians working on World Cup projects in Qatar. In May, Associated Press quoted Gianni Infantino, the president of FIFA, as saying that only three people have died on World Cup construction sites.

An Indian worker at a construction site in Qatar. Indians formed the majority of the workforce, according to the Supreme Committee.

Asked by The Indian Express whether the deaths of Indian workers during this period in Qatar can be linked to the World Cup, Bheem Reddy Mandha, president of Emigrants Welfare Forum and a member of the Migrant Forum in Asia, says, “Naturally. Because the World Cup is the major contract. Everything is related. Before leaving (for Qatar), the person is healthy. After going there, people, including those below 40 years, are dying, many because of cardiac arrest. It’s a serious question.”

Wife Sujata still searching for answers about her husband’s death.

Back in the workers’ homes, meanwhile, it’s the same story on loop — from the unfinished home of 49-year-old Ramesh Kalladi who left behind a trail of poverty and debt to the village of 25-year-old Padam Shekar whose first job as a delivery boy for a World Cup sponsor turned out to be his last.

“We received two months’ outstanding wages. No compensation,” says Ashique (24), whose father Abdul Majid (56) died in July 2020. Majid, from Dharpally in Telangana, was a heavy vehicle driver engaged by Trey Trading Company in Doha to ferry labourers to work sites.

“Very coldly, they said my husband had died after suffering a cardiac arrest and they would transport the body within a week. They just sent the salary that was owed, around Rs 24,000. There was no mention of compensation,” says Latha Bollapally from Mendora village in Telangana, whose husband Madhu succumbed to “heart failure” on November 17, 2021.

Latha now works as a beedi roller and her 22-year-old son Rajesh is a daily wage labourer.

According to a Human Rights Watch report, Qatar’s labour laws are such that companies are required to pay compensation to families only if the death occurs at a worksite or directly because of work. And this makes it difficult for the families to make a legitimate claim.

Says Swadesh Parkipandla, president of the Pravasi Mitra Labour Union, “In cases that are declared as natural deaths, post mortem is not conducted. There are no studies, either by the government there or independent groups, to understand the reasons why so many deaths occurred due to cardiac arrest or other natural causes.”

One such case is buried inside an official report of the Supreme Committee.

Around 9.30 am on April 27, 2016, Jaleshwar Prasad, a steelworker, was inside the players’ tunnel of the Al Bayt Stadium when he collapsed. Two hours later, he was pronounced dead. According to the Supreme Committee’s report, Prasad passed away because of “heart failure due to acute respiratory failure”.

And yet, nothing captures this tragedy better than the journey of Ramesh Kalladi from Velmal in Telangana whose unfinished home is a gruesome reminder of the human toll of what has been described by Qatari organisers as “a FIFA World Cup like no other”.

On August 10, 2016, six days before his 50th birthday, the pick-up truck driver returned to his camp in the Sanaya Industrial Area of Doha after work when he suddenly collapsed and died. Qatar’s public health department declared it as a case of natural death — a claim his family contests.

In 2010, the year Qatar got the World Cup rights, Kalladi took out a loan to secure a job there for 1,300 Qatari riyal, or about Rs 29,000 at the current exchange rate, per month. At the camp, he was allotted a “tiny room with five other men”, his son Sravan said. “Stadiums were being constructed and there were roads being built around them,” Sravan, who joined him in Qatar in 2015, said. “My father was building one of those roads that led to the stadium.”

After working in extremely high temperatures, going up to 50 degrees Celsius, and dusty conditions, Kalladi’s health began to deteriorate, leading to his death, Sravan said. According to the family, all that it got from his employers, Boom Construction Company, was the month’s salary he was owed. “We did not receive any compensation from them,” Sravan said.