Records of Demetrios A Demetriades & Co (Dadlaw), a law firm that provides corporate services, show that it received direct instructions from Bhanu Choudhrie on managing Lifedream Trading Ltd which was incorporated in Cyprus in 2001. 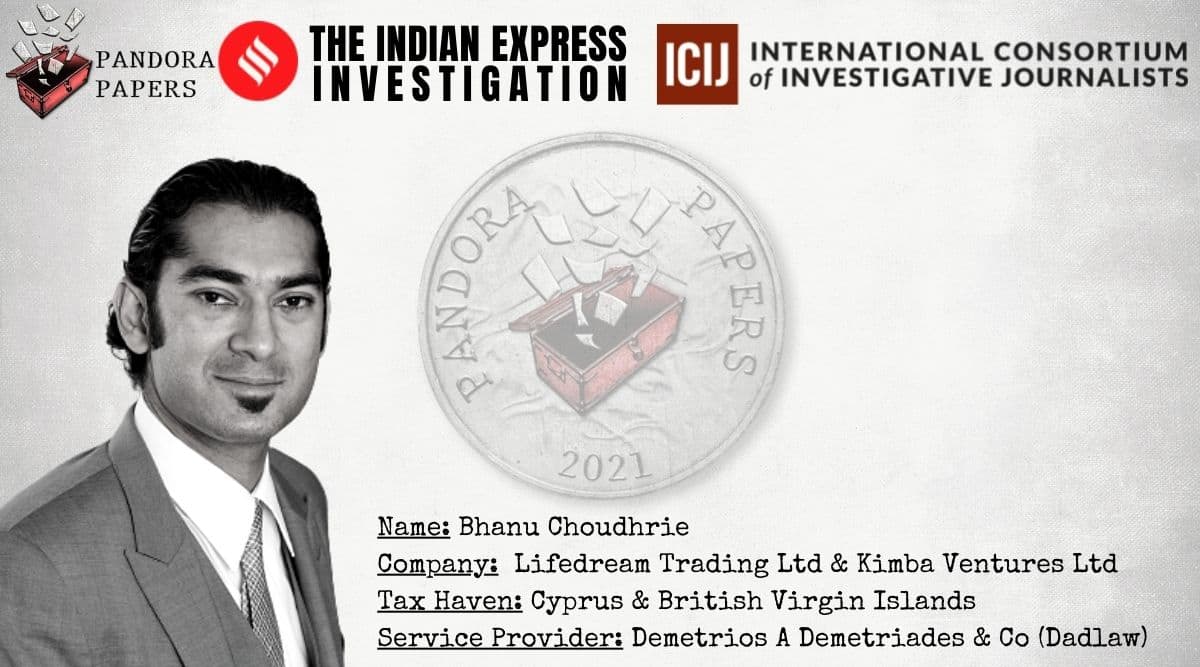 Bhanu Choudhrie is the eldest son of India-born British arms agent Sudhir Choudhrie who faced probes in India and the UK on charges of alleged fraud and financial irregularities.

Cyprus is the latest dot on the map of offshore entities linked to Bhanu Choudhrie, the eldest son of India-born British arms agent Sudhir Choudhrie who faced probes in India and the UK on charges of alleged fraud and financial irregularities, records in the Pandora Papers investigated by The Indian Express show.

Records of Demetrios A Demetriades & Co (Dadlaw), a law firm that provides corporate services, show that it received direct instructions from Bhanu Choudhrie on managing Lifedream Trading Ltd which was incorporated in Cyprus in 2001.

They show a company registered in the British Virgin Islands, Kimba Ventures Ltd, as the beneficiary of the Cyprus entity.

In June 2008, Choudhrie approved the financial statements of Lifedream Trading for 2002, 2003 and 2004, authorised the nominee directors to sign the papers, and undertook to pay the tax liabilities, if any.

In 2010, Dadlaw billed C&C Sons Ltd (now C&C Alpha Group), which is a family holding company set up in the UK by Choudhrie in 2002, for its services rendered to Lifedream Trading.

On paper, Dadlaw’s Demetrios A Demetriades and Harris D Demetriades served as directors in Lifedream Trading, while Dadlaw Nominees Ltd and Dadlaw Secretarial Ltd were the nominee shareholders.

In August 2003, Lifedream Trading requested the Bank of Cyprus to “urgently allocate a US Dollars two days notice account”. In September 2003, the company issued a Power of Attorney to Ravinder Kumar Bhambri, an Indian national with a London address. Lifedream Trading was dissolved in 2014.

Cyprus-based Dadlaw, C&C Sons (UK) and Bhanu Choudhrie did not respond to queries from The Indian Express.

As reported by The Indian Express in the Panama Papers (2016) and FinCen Files (2020) investigations, Bhanu Choudhrie was director of two BVI companies — Belinea Services Ltd and Anterna Ltd — that made over 200 transactions worth at least $118 million between 2009 and 2014. These transactions were flagged by Bank of China, Bank of New York Mellon and JPMorgan Chase for suspected “money laundering/structuring”.

Belinea Services was among the Choudhrie “family group” entities that received over $100 million from Russian arms companies during 2007-08, according to a 2008 report by a risk management team linked to Credit Suisse.

In 2014, Choudhrie and his father were arrested as part of a Serious Fraud Office probe in London for allegedly helping Rolls-Royce pay bribes to secure contracts in China and Indonesia but the case was subsequently dropped.

After Choudhrie set up C&C Sons in 2002, he and his father became UK citizens. Choudhrie’s father, Sudhir, shifted base from Delhi to London in 2006 after he was named in CBI probes into the Defence Ministry’s contract with Israeli firm Soltam to upgrade 130-mm field guns and the Barak missile deal.

In 2011, after the CBI gave a “clean chit” to Sudhir in the Rs 208-crore Soltam deal, the Enforcement Directorate commenced a probe into financial transactions of the deal, but did not find any evidence of violation. The Barak missile deal case was closed in 2013.