While the official Shri Ram Janmabhoomi Teerth Kshetra Trust — set up in February 2020 — has so far acquired nearly 70 acres, private buyers are also rushing in anticipating hefty gains as the project gathers momentum. Even officialdom is hoping to cash in. 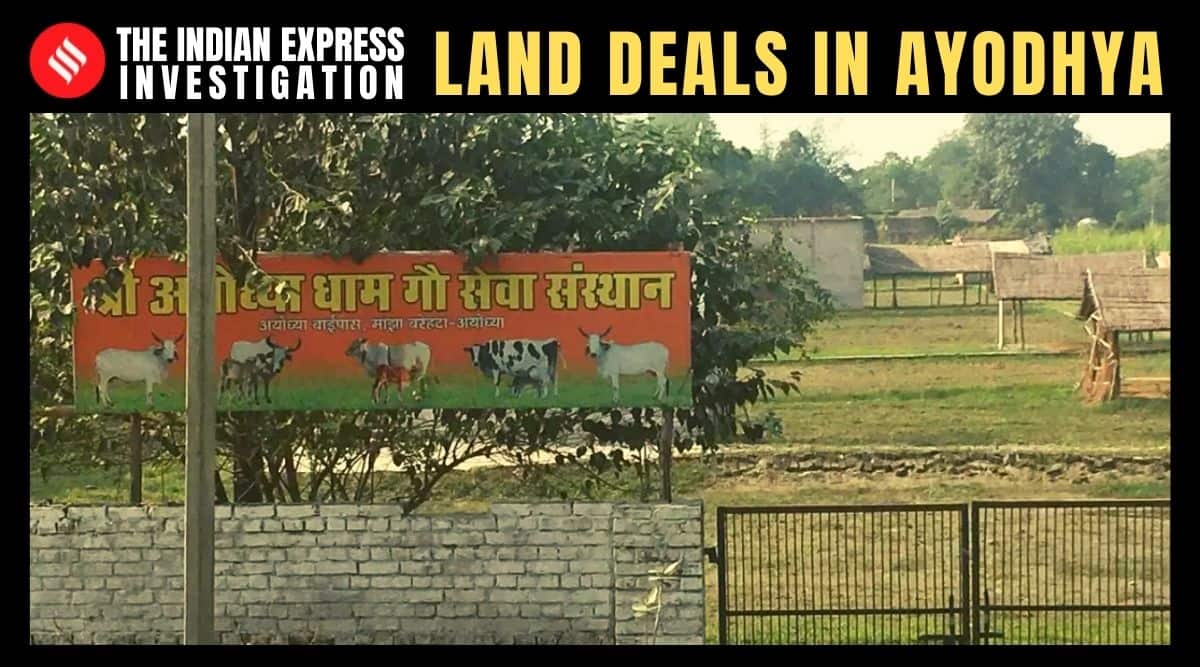 The buyers include local MLAs, close relatives of bureaucrats who have or are serving in Ayodhya, and local revenue officials whose job is to authenticate land transactions, an investigation by The Indian Express has found.

Land in Ayodhya, after the November 9, 2019 Supreme Court verdict cleared construction of the Ram temple, is prime real estate.

While the official Shri Ram Janmabhoomi Teerth Kshetra Trust — set up in February 2020 — has so far acquired nearly 70 acres, private buyers are also rushing in anticipating hefty gains as the project gathers momentum. Even officialdom is hoping to cash in.

The buyers include local MLAs, close relatives of bureaucrats who have or are serving in Ayodhya, and local revenue officials whose job is to authenticate land transactions, an investigation by The Indian Express has found.

From an MLA, Mayor, and a member of the state OBC Commission who bought land in their own name to relatives of the Divisional Commissioner, Sub-Divisional Magistrate, Deputy Inspector General of Police, Circle Officer of Police, State Information Commissioner — in 14 cases, records investigated by The Indian Express show, families of these officials bought land after the apex court verdict, all within a 5-km radius of the Ram temple site.

One set of these transactions raises questions of conflict of interest given that the seller, in five cases, the Maharshi Ramayan Vidyapeeth Trust (MRVT), is under scrutiny — for alleged irregularities in purchase of land from Dalit villagers — by the very same officials whose relatives bought the land.

Read |UP government orders probe into Ayodhya land deals near temple, seeks report in a week

The Indian Express investigated land records, visited plot sites, spoke to officials and buyers in Ayodhya to piece together the following list:

His father-in-law Keshav Prasad Agrawal bought 2,530 sq m in Barhata Manjha on December 10, 2020 for Rs 31 lakh from MRVT; his brother-in-law Anand Vardhan bought 1,260 sq m in the same village the same day for Rs 15.50 lakh from MRVT. Significantly, company records show that the Commissioner’s wife is a partner in her father’s firm, Helmand Contractors and Builders LLP.

Comment: M P Agrawal said he does “not remember anything” and did not respond to a questionnaire. His father-in-law Keshav Prasad Agrawal said, “Yes, I purchased this land since I plan to stay in Ayodhya post-retirement. Mr M P Agrawal has no role in this.”

Work at the temple site in Ayodhya. (Express Photo)

Comment: Purushottam Das Gupta said he had no role in the inquiry against MRVT and he had not purchased any land in his name. Said Atul Gupta: “I bought the land because it was available at a cheaper rate. I did not take (Purushottam’s) help.”

Comment: Said Rajesh Mishra: “I purchased these plots from my savings. I have nothing to do with (MLA) Tiwari ji.” On November 18, 2019, a trust linked to the MLA, Maan Sharda Sewa Trust, bought 9,860 sq m in Barhata Manjha from MRVT for Rs 73.95 lakh.

Comment: Deepak Kumar said: “No land was purchased by any of my relatives during my posting in Ayodhya. No money was paid by me, my wife or my father for any land there. My co-brother (Mahima Thakur’s husband) is from Kushinagar and now lives in Bengaluru. He told me they have bought land in Ayodhya after selling their land in Kushinagar. I have no role and relation with this purchase.” 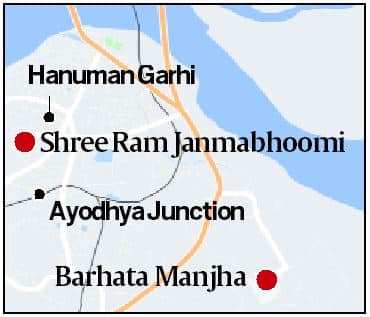 Comment: “I am not aware if any case against them is pending. I have not taken any help from the district administration in this deal.”

Comment: Said MLA Gupta: “I have not purchased even a small piece of land in Ayodhya in the last over four years of my tenure as MLA. But as MLA of Ayodhya, I keep inviting people from across the country to come and visit and purchase land in Ayodhya.”

Said father of Tarun Mittal, his brother Chandra Prakash Gupta: “We have a cowshed on the plot, there are nearly 20 cows for now. In Maheshpur, four-five people have bought land jointly.”

On July 9, 2018, as Manager, Paramhans Shikshan Prashikshan Mahavidyalay, he acquired 2,530 sq m in Kazipur Chitavan in Ayodhya from one Ramesh as “donation”. The value of land in official records is Rs 1.01 crore.

Comment: Upadhyay said: “I had earlier sold my own land, later bought it again (from Harish Kumar). In Kazipur Chitavan, the land purchase is for my college which is being run there since 2006.”

Comment: While Ayush Chaudhary said he has no links to Rani or the foundation, Rani’s husband Ram Janm Verma said: “Ayush is my wife’s cousin, we have established the foundation.”

Comment: Said Arvind Chaurasia: “My father-in-law is associated with religious activities. They want to establish an Ashram in Ayodhya. They want to settle there after retirement of my mother-in-law who is a teacher.”

On November 18, 2021, his wife Sangeeta Shahi and their son Saharsh Kumar Shahi bought 929.85 sq m in Sarairasi Manjha in Ayodhya, for Rs 15.82 lakh from one Indra Prakash Singh.

Comment: When contacted, Harshvardhan Shahi said: “I want to live in Ayodhya. I have bought this land for residential purposes. I will build a home there for my family.”

Comment: Said Maurya: “I want to build a hotel there on this land after other buyers around build. I have to arrange money from banks.”

On March 8, 2021, his father Vashisth Narain Upadhyay bought 116 sq m for Rs 3.50 lakh in Ganja from one Shyam Sundar. A lekhpal is a revenue official who authenticates land transactions.

Comment: Said Badri Upadhyay: “There is no conflict of interest. I have money and I can buy land anywhere.”

Comment: Sudhanshu Ranjan denied any purchase. His wife said: “Sudhanshu is my husband. You can talk to him about this land deal.”

Comment: Dinesh Ojha said: “This land is not disputed and is not in my name.”

Ayodhya: Kin of officials bought land from trust under probe for illegal transfer of Dalit land