Explained: Why it may be time to hail legendary ball-player Zidane as genius coach Zidane

He isn’t a big name in the dugout like Guardiola and Klopp, but almost a decade and a half after ending his playing career, the French legend is quietly carving an even more successful career in charge of Real Madrid Real Madrid’s head coach Zinedine Zidane, holds the trophy as he poses for the photographers after winning the Spanish La Liga 2019-2020 following a soccer match between Real Madrid and Villareal at the Alfredo di Stefano stadium in Madrid, Spain, Thursday, July 16, 2020. (AP Photo)

“He is a walking spectacle and he plays as if he had silk gloves on each foot. He makes it worthwhile going to the stadium…”

High praise indeed, coming from the legendary Alfredo Di Stefano. The Real Madrid stalwart of the 1950s was talking about Zinedine Yazid Zidane after the latter was named World Player of the Year in 2003.

That Zidane is one of the greatest footballers of all time is accepted beyond doubt. He is a World Cup winner and a European champion, both for country and club, but the beauty and grace of Zidane’s game cannot be measured in trophies and silverware.

But almost a decade and a half after ending his playing career, the French legend is quietly carving an even more successful career in the Real Madrid dugout. His latest triumph was securing the La Liga title on Thursday (July 16) night.

While the likes of Pep Guardiola and Jurgen Klopp may be the current rage, what Zidane has achieved at the Santiago Bernabeu is a remarkable story, and it’s still unfolding. Only that he is not known to be a great talker, and prefers to work in the background.

Success without the ball

As a player, Zidane’s greatest strengths were ball retention and passing. But now, he has shown that he could be as effective, if not more, from the sidelines.

If three successive Champions League titles, unprecedented in the current incarnation of the competition, and a La Liga title in a two-and-a-half-year stint is not impressive enough, what Zidane is accomplishing in his return to Real Madrid will silence any doubter.

Consider this: Zidane stepped down on a high five days after clinching the 2018 Champions League – his third on the trot. Real Madrid managers depart more often after getting the sack — someone walking away on his own is a rare occurrence.

But his successors couldn’t keep the impressive run going – Julen Lopetegui and Santigo Solari didn’t last long in the job – and the club soon fell off the perch. Real lost to Barcelona in the Copa del Rey semi final, went down to their arch rivals in the league which put them 12 points behind in the title race, and were even eliminated by Ajax in the 2018-19 Champions League. 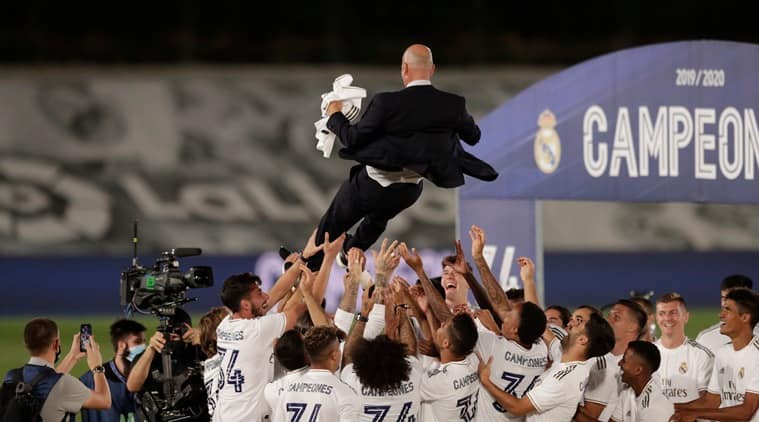 Real Madrid’s players throw on the air their head coach Zinedine Zidane, as they celebrate after winning the Spanish La Liga 2019-2020 following a soccer match between Real Madrid and Villareal at the Alfredo di Stefano stadium in Madrid, Spain, Thursday, July 16, 2020. (AP Photo)

The Real Madrid club hierarchy is not known for its patience, and they thought it was best to bring back the man who had walked away not too long ago.

Though Barca were too far ahead to be caught last season, Zidane went about his job in earnest for the 2019-20 season.

The big-ticket arrival of Eden Hazard from Chelsea, as well as the incoming Luka Jovic and Eder Militao have played a part, as has Karim Benzema stepping into the role of the main man up front. Youngsters Vinicius and Rodrygo have also bolstered the attack.

Midfielder Federico Valverde has been a notable success. The Uruguayan has been an asset in both attack and defence. The Gareth Bale saga took a lot of media space but the Welshman is still a Real player.

When the pandemic brought matters to a halt, Real found themselves two points adrift of Lionel Messi’s Barcelona. But since the restart, Zidane’s men not only made up the deficit but also went on an impressive winning run to seal the title with a round to go.

With such a record of turning things around, it is a surprise that the bald Frenchman is not spoken of in the same breath as Guardiola or Klopp.

Any image of Zidane in the fan’s mind has him with the ball at his feet or heading in those memorable goals in the 1998 World Cup final. Manager Zidane is often just an extension of the player-legend. But it does him a disservice.

Zidane didn’t get airdropped into the Real Madrid hot seat. He was assistant to Carlo Ancelotti when the Italian was the manager, and even functioned as coach of Real Madrid Castilla, the club’s B team. It was only when Rafael Benitez was sacked at the beginning of 2016 that Real turned to one of their greatest ever players.

The likes of Guardiola, Klopp, Jose Mourinho, and Alex Ferguson never had such a glittering record as players. Their names were almost exclusively made by their prowess in the coaching arena.

Zidane the manager, in contrast, will always be compared with Zidane the player, and in the fans’ eyes whatever he accomplishes in the dugout will forever be overshadowed by the magic he produced with a football.

Zidane’s first term as Real Madrid manager had the considerable advantage of calling upon the services of one of the all-time greats.

Cristiano Ronaldo could always be relied upon to deliver in big games, and break open tight situations. The Portuguese star’s drive and winning mentality gave Real an almighty weapon. During his almost decade-long career at the Spanish giant, Ronaldo won four Champions League titles, three back-to-back ones with Zidane at the helm.

Hence, an uncharitable way of looking at Zidane’s success would be that with Ronaldo finding the net regularly, the manager had little to do.

But it’s beyond doubt that Zidane helped to get the best out of his main man. 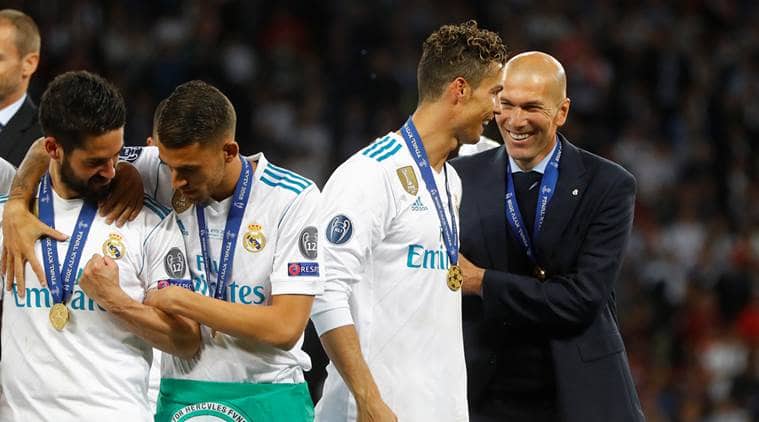 “You need to feel like you are an important part of the group and Zidane made me feel special. He helped me a lot. I already had a lot of respect for him but working with him made me admire him more. That’s because of what he’s like as a person, how he talks, how he led the team and how he treated me. He’d tell me, ‘Cris, relax and just play your game — you are the one who is going to make the difference’,” Ronaldo has been quoted as saying about his former manager.

But there are other players in the squad, and Zidane didn’t neglect them either, or his record wouldn’t be as impressive. He made the defence and midfield strong to allow Ronaldo & Co to do their job up front.

But Ronaldo’s absence from the Bernabeu makes Real’s latest achievement even more impressive. Despite Messi starring as usual for Barca, Zidane’s men are champions of Spain again, which is a considerable accomplishment with Hazard yet to hit his straps completely at his new club.

It proves how Zidane has got the best out of veterans like Benzema, Toni Kroos, Luka Modric, and Sergio Ramos while integrating the new arrivals.

Don’t miss from Explained | ‘Doing a Leeds’ to ‘Bielsa ball’: How a club reclaimed its lost glory

Tiki-Taka, Gegenpressen, Total football, Fergie time — these terms have entered the football lexicon over the decades, and each one of them is associated with a particular manager.

But no such high-sounding words have been linked with Zidane so far. His modus operandi seems to be a traditional one – assembling a strong squad and then getting the best out of them. He is not heard much in the media – apart from the mandatory press conferences — and mostly remains in the background. He seems to believe it’s the players on the pitch who get the job done.

If at all any word could be used for Zidane’s style of functioning, it would be man-management. Whether a player is a superstar or just making his way in the game, his years of experience playing at the top level will tell him how to make him excel. He doesn’t seem to be a proponent of any philosophy, other than just getting the job done.

Moreover, at a club known for player power and board politics, Zidane has managed to maintain harmony. Having been a part of the club as a player and coach-manager for a long time has provided him with insight on what works.

“The strength he’s had in finding the indispensable balance of a team so full of class and talent,” former Juventus manager Massimiliano Allegri told marca.com about what he admires about Zidane’s managerial style. 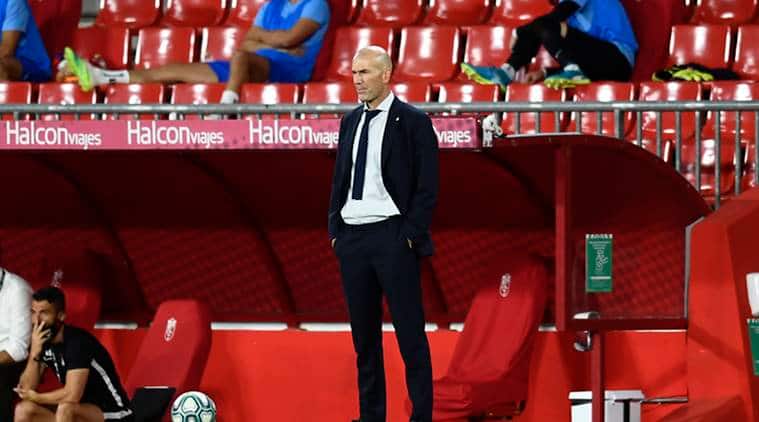 Zidane won three Champions League titles in under three seasons – the joint most with Ancelotti and Liverpool’s Bob Paisley, if one includes the competition’s previous incarnation, the European Cup.

That’s more than what celebrated names such as Ferguson, Mourinho, Guardiola, Ottmar Hitzfeld, Vicente de Bosque, Jupp Heynckes and Arrigo Sacchi managed over a much longer managerial career. A couple of them still have a chance to add to their laurels, but so does Zidane.

Needless to say, Real’s pedigree and financial muscle will ensure that any manager will have a pretty strong squad at his disposal. But not everyone can get the best out of the superstars, nor deal with the massive egos involved.

Come to think of it, Guardiola has failed to get his hands on the Trophy with the Big Ears since he left Camp Nou, and it has been a decade since Mourinho tasted success at that stage. Klopp may be the hottest manager going around at the moment, but he’s still got only one Champions League crown in his CV. Ferguson was at United for more than a quarter of a century, but won it ‘only’ twice.

Zidane and Guardiola are the youngest on the list, yet to turn 50. The two are facing off in the Champions League Round-of-16 knockout phase with Manchester City currently having the upper hand, having won the away leg 2-1 in March.

All these managers were at big clubs with some of the best players in the world. So if Zidane continues to deliver success to the hard-to-please Real Madrid faithful, he may conceivably have the job for as long as he wants.

And that will give the Frenchman of few words more time to rewrite history books and ensure that Zidane’s name is taken alongside those of Mourinho, Guardiola and Ferguson, if not before them.