Why new ‘Ram Setu’ video is no more than an interest-rouser, a talking point

A video went viral and brought back an old debate this week. The Indian Express analysed its contents and discussed it with geologists. Upshot: no scientific conclusions can be drawn — not until more is known. 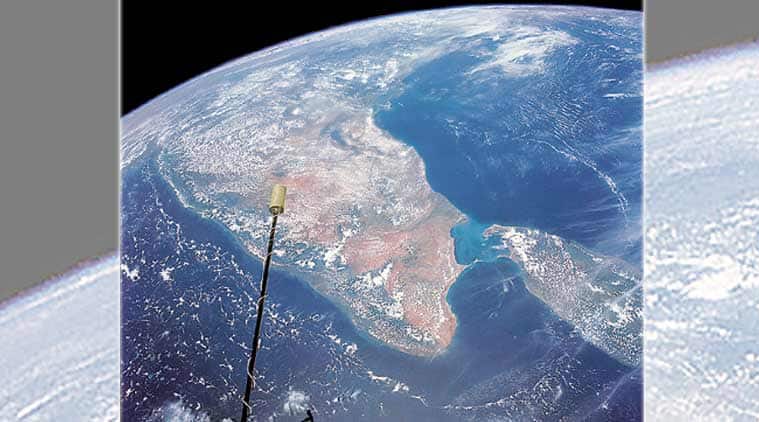 A satellite image of the Bay of Bengal showing the so-called Adam’s Bridge. (Photo: NASA)

A two-and-a-half-minute video tweeted by Science Channel on December 11 has being widely circulated as fresh evidence to support the theory that a rock formation in the Bay of Bengal off the coast of Rameswaram is actually the bridge that Lord Ram and his army built to reach Sri Lanka, as described in the Ramayana. Science Channel is an American television network owned by Discovery Communications, and the video in question is a promo for an upcoming episode of a series titled ‘What on Earth’ that seeks to explain inexplicable-looking images of the planet captured by satellites.

So, what exactly does the video show?

It shows images that it says were captured by a NASA satellite over the “shallow waters” of the Indian Ocean, revealing something like a “chain of submerged objects running largely between Sri Lanka and India”. It says that on closer analysis, “investigators” had calculated that the “line of rocks” was “over 30 miles long”.

“What makes the image especially intriguing is that the rocks are in an area in the sea mentioned in an ancient Hindu poem, a poem that also refers to a magic bridge,” says the promo video.

The video contains short one-line comments from three “experts”: Alan Lester, a lecturer in Geological Sciences at the University of Colorado Boulder, who talks about the story of Lord Ram building a sea bridge to reach Sri Lanka; Erin Argyilan, an associate professor in the Geosciences Department of Indiana University Northwest; and Chelsea Rose, a “historical archaeologist” who is an “adjunct faculty member” at Southern Oregon University.

The video essentially makes two claims. One, that the rocks at the site “predate” the surrounding sand. “Scientific analysis reveals the rocks are 7,000 years old but are sitting over the top of sand that is only 4,000 years old,” it says. And two, that these rocks do not belong there and have been brought from somewhere else, possibly by a human agency.

These claims are not, however, made by any of the three “experts”. They are part of the commentary in the video. An unidentified individual says these are “stones that have been brought from afar and set on top of the sandbar island chain”.

Argyilan wonders how sand could accumulate in shallow waters, while Rose says that since the rocks on top of the sand actually predate the sand, there was “more to the story”.

And how credible are these two claims?

The promotional video cites no sources or studies. The basis for the claims will perhaps be known once the full episode is broadcast. It is best to wait until then.

However, none of the several Indian oceanographers and geologists that The Indian Express spoke to over Wednesday and Thursday were aware of any new published material in any peer-reviewed journal that would support these assertions. Several of them had seen the video, and they said it raised more questions than answers. “The claims in this video do not merit a discussion until the evidence or source is revealed,” Dr Rajiv Nigam, an acclaimed marine geologist who retired from the Goa-based National Institute of Oceanography, said. 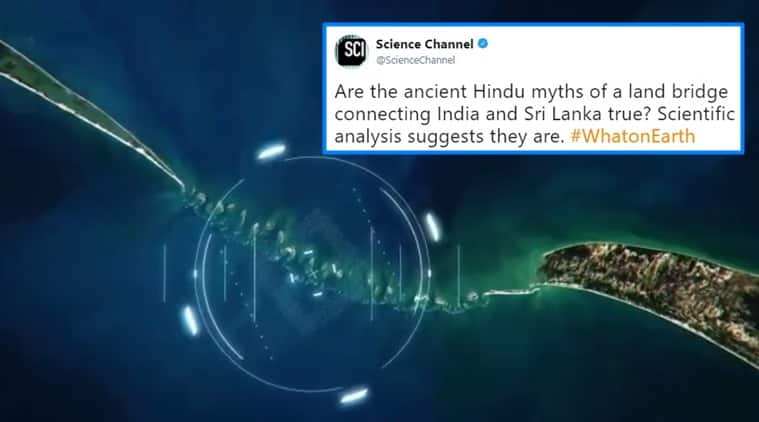 A screen shot of the promo released by the US-based Science Channel.

While no scientific attempt has been made to date the rocks or the sand at the site, the claim that the rocks could be 7,000 years old is not entirely implausible, said C P Rajendran, a geologist with the Bengaluru-based Jawaharlal Nehru Centre for Advanced Scientific Research.

However, like Dr Nigam, Prof Rajendran, too, said it was difficult to believe any claim in the absence of dating methodology and other information. “The claim about rocks having been transported from somewhere else… It need not necessarily be due to human intervention,” Prof Rajendran said. “It is possible that the rocks were transported by cyclones, which are pretty frequent in that area. But we need to have more information, and it is not there in this video,” he said.

Dr Nigam, incidentally, had carried out a study in the mid-1990s on the changes in sea levels over time. That study had shown that about 7,000 years ago, the sea level in that area was on average at least 2 metres lower than the current average level of about 3 metres. In the circumstances, the study said, it was theoretically possible that a bridge-like structure — the word he used was “bund” — could have been built over the sea at that time.

“Because the water level in the sea in that area was very low, even exposing land in some places, it was possible to cross the sea to Sri Lanka by putting rocks in place, something similar to what we still do in the villages,” Dr Nigam told The Indian Express.

He clarified, however, that he had not studied whether the rock formation in existence at that place was the creation of man. “The fact is that extensive studies are required to be done, and it has not been done so far,” Dr Nigam said.

How then should this video be seen?

Solely as an effort to “stimulate interest and conversation” in topics such as these, according to Argyilan, one of the experts quoted in the video. The Indian Express had contacted Argyilan and Rose to know more about the claims. Till the time of going to press, only Argyilan had responded. In an email, she said that she had “not performed primary scientific research related to Ram Setu”, and that she had been asked to comment “only on the satellite photograph” presented in the programme. “My specific comments in the piece address only the visual clues related to presence of a carbonate shoal — bright, light blue waters in a carbonate environment indicative of shallow waters between India and Sri Lanka,” Argyilan said.

“I am mindful that only scientists working directly with the geologic, archaeological, and geo-chronologic data should be considered ‘experts’ on the site. That, science should be evaluated through rigorous peer review. It was my perception that the science covered in ‘What On Earth’ (programme) is presented to stimulate interest and conversation, but not to arrive at definitive conclusions about the science… I do not believe that the shows strive to reach a definitive conclusion on the science, instead they aim to present the science in an intriguing way,” Argyilan wrote in her email.