Fishermen can defy trawling window ban because of the way they, and the business, are organised. 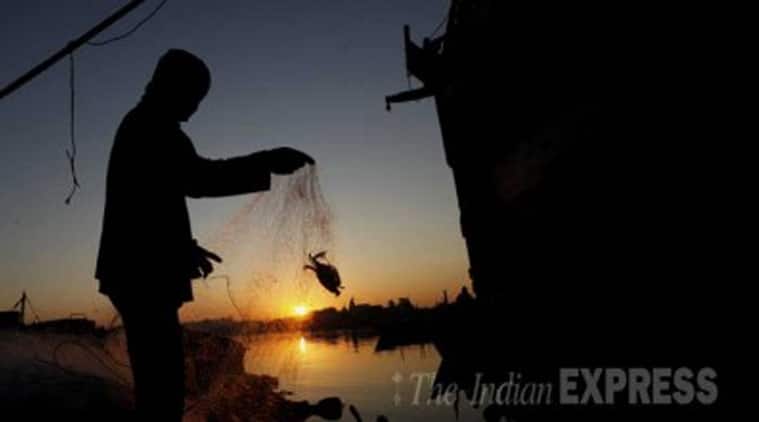 Trawlers are out in defiance of the ban, and the fisherfolk have said that they would comply for only 47 days.

Kerala’s fishing community is on the warpath with the Centre, which has imposed a ban on trawling for 61 days starting June 1, and prohibited traditional fishermen using mechanised vessels from sailing beyond 12 nautical miles during the ban period.

But trawlers are out in defiance of the ban, and the fisherfolk have said that they would comply for only 47 days — beginning June 14. Traditional fishermen have gone fishing beyond 12 nautical miles, saying they have a right beyond that zone even during the ban.

WHY THE BAN?
Most species of tropical fish have a spawning period of six to seven months, with one or two important seasons. Studies have shown seasonal suspension of fishing activity by mechanised trawlers, which engage in deep sea scooping, help in conservation and management of fish resources. The objective of the ban is to protect fish wealth during the breeding of commercially important species, and to allow the growth of the young fish.

RANDOM TO UNIFORM…
Fishing communities in various coastal regions have temporarily suspended mechanised fishing at different times in the past. However, there has been no coordination or uniformity in following the practice, leading to conflicts among states and their fishing groups. Starting 1988, the central government started to impose a uniform trawling ban, identifying two windows for cessation of fishing, one each for the country’s eastern and western coasts. All the coastal states and UTs follow the seasonal ban as per their respective Marine Fishing Regulations Acts.

…AND 47 DAYS TO 61
The length of the ban had been 47 days until last year, even though there had been divergent views on it. In 2013, following representations from various quarters seeking a longer ban, the Department of Animal Husbandry, Dairying and Fisheries under the Ministry of Agriculture set up a technical committee to review the duration of the ban and suggest steps to conserve marine wealth. Last year, the panel recommended that the seasonal fishing ban should be for 61 days — from April 15 to June 14 on the east coast, and from June 1 to July 31 on the west. Boats of fewer than 10 horsepower engine capacity along the east coast, and those with fewer than 25 horsepower along the west coast, were exempt. Non-motorised vessels too were kept out of the purview of the ban.

ANGER IN KERALA
About 80 per cent of the approximately 2 lakh fishermen in Kerala go out in mechanised canoes and vessels, the remaining work on trawlers. Traditional fishermen have fished beyond 12 nautical miles even during the trawling ban period. However, for the first time, the union Agriculture Ministry has ordered that traditional fishermen using mechanised vessels cannot fish beyond 12 nautical miles for the 61 days until July 31. The directive has triggered protests from the fishing community, which fears their livelihood would be affected. Other states along the eastern and western coasts have not seen similar protests mainly because traditional fishermen are fewer in those states, and are not organised like in Kerala. 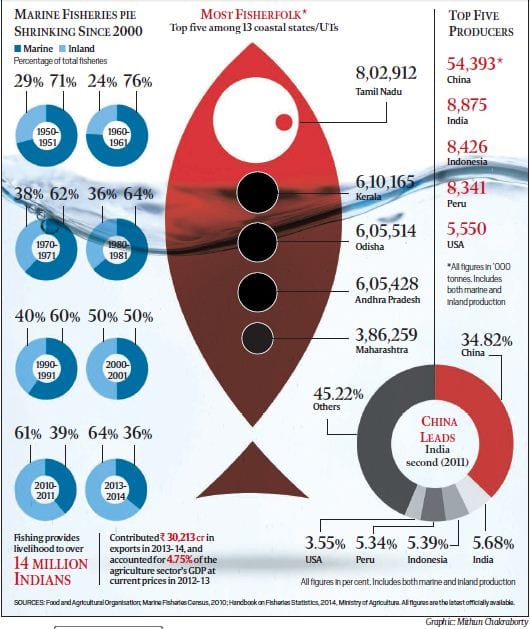 FOLLOWED BY DEFIANCE
Even after the ban came into effect on June 1, fishermen in mechanised boats have been out up to 30 nautical miles from the coast. On Wednesday, union Agriculture Minister Radha Mohan Singh clarified that non-mechanised boats were free from the ban; however, Kerala has only a negligible number of non-mechanised boats. Owners of trawlers, about 3,200 of which are registered in Kerala, have said they would observe the ban for only 47 days. Trawlers in other states have fallen in line with the 61-day ban.

QUESTION OF LIVELIHOOD
Boat owners in Kerala say the monsoon season from June to August is when they land 60 per cent of their annual catch. Keeping away from fishing during this season would be suicidal for them. They argue that boats elsewhere in the coastal states have agreed to the ban only because they don’t get fish during these months. According to the fishermen, the Karikkadi shrimp, which is found only along the Kerala coast and which used to be a prominent item of export, is no longer caught because trawling is banned during the monsoon season.

GOVERNMENT’S STAND
The Congress government has said that the trawling ban would begin from the midnight of June 14, and stay for 47 days. During this period, traditional fishermen would be allowed to go fishing within 12 nautical miles. They will receive free ration rice, and financial relief of Rs 2,700. As per the 2011 Census, Kerala’s fisherfolk population is 10.02 lakh, of which 7.71 lakh live along the coast. 74,000 people are engaged in fishery-related activities. The fisherfolk contribute about 9 per cent of the gross state domestic product.