Why has the MEA asked Indians in Canada to be cautious and vigilant?

The advisory has come a few days after media reports of a “Khalistan referendum” in Canada, as well as reports of the vandalising of a Hindu temple recently 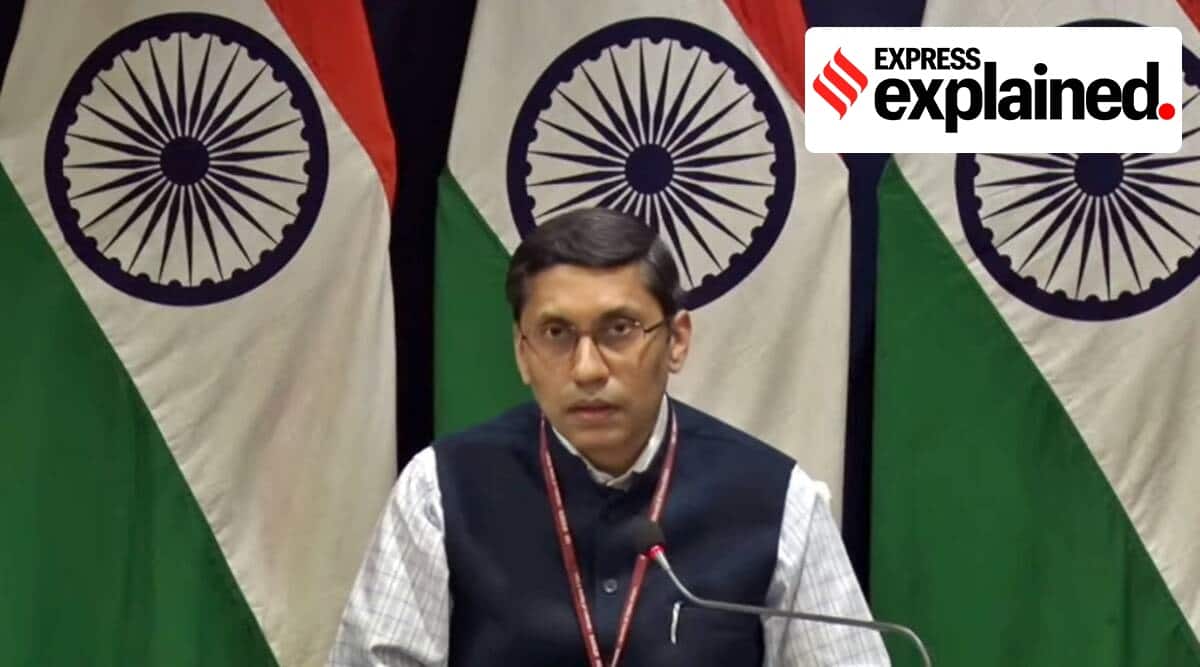 The advisory said: “In view of the increasing incidences of crimes as described above, Indian nationals and students from India in Canada and those proceeding to Canada for travel/ education are advised to exercise due caution and remain vigilant.” (File photo)

Citing a “sharp increase in incidents of hate crime, sectarian violence, and anti-India activities” in Canada, the Ministry of External Affairs (MEA) issued an advisory on Friday (September 23) for Indian nationals and students who are in Canada.

The advisory said: “In view of the increasing incidences of crimes as described above, Indian nationals and students from India in Canada and those proceeding to Canada for travel/ education are advised to exercise due caution and remain vigilant.”

Advisory for Indian Nationals and Students from India in Canadahttps://t.co/dOrqyY7FgN pic.twitter.com/M0TDfTgvrG

What has happened in Canada recently?

The advisory has come a few days after media reports of a “Khalistan referendum” in Canada, as well as reports of the vandalising of a Hindu temple recently.

In a media briefing on September 22, a question was asked to Arindam Bagchi, the official spokesperson of the MEA, about a “so-called Khalistan referendum taking place in countries like Canada”.

In response, Bagchi termed it a “farcical exercise” held by “extremist and radical elements”. He said that the matter had been taken up with Canadian authorities, that the Canadian government respects the sovereignty and territorial integrity of India, and that Canada would not recognise the exercise.

“However”, Bagchi said, “we find it deeply objectionable that politically motivated exercises by extremist elements are allowed to take place in a friendly country.” The people were aware of the “history of violence” around this demand, the spokesperson said, and assured that the Indian government would continue to press the Canadian government on this matter.

What hate crimes and violence are happening?

Earlier this month, the BAPS Swaminarayan Mandir in Toronto was allegedly defaced with “anti-India” graffiti, PTI reported. The High Commission of India in Ottawa, Canada, tweeted that it strongly condemned the act and requested Canadian authorities to investigate the incident.

My statement in Canadian parliament on the recent hate crime incidents on Hindu temples in Toronto. pic.twitter.com/QgbNxe9FEG

Chandra Arya, an Indian-origin Member of Parliament, also mentioned another attack that happened in July, and said in the Canadian parliament that these incidents “must be condemned by all as hate crimes”, adding there was an increase in “anti-Hindu sentiments”.

My statement in Canadian parliament on the recent hate crime incidents on Hindu temples in Toronto. pic.twitter.com/QgbNxe9FEG

Canadian news outlets had reported in July that a statue of Mahatma Gandhi in a temple in Richmond Hill city had been vandalised with the words “Khalistan” and “Rapist”. The local police termed it a “hate bias-motivated incident”.

We are deeply anguished by this hate crime that seeks to terrorize the Indian community. It has led to increased concern and insecurity in the Indian community here. We have approached the Canadian government to investigate and ensure perpetrators are brought to justice swiftly. https://t.co/wDe3BUpEWi

What is the history of Indians in Canada and the Khalistan movement?

Indians have been moving to Canada for over a century, and the country has a sizable Indian-origin population, making up among the world’s largest Indian diasporas. Canada is a preferred destination for higher education for many Indian students today, with around 60,000 students choosing to go to the country in the first half of 2022, second only to the US.

The Indian immigration to Canada was pioneered by Punjabi Sikhs. It is estimated on the basis of Canada’s Immigration, Refugees and Citizenship, Canada (IRCC) report by local consultants that around 60 to 65 per cent of those applying to go to Canada are from Punjab in India.

Over the years, the Punjabi Sikh community has become a rich and politically powerful group in Canada. Sections of the community have also supported and funded the Khalistan separatist movement for decades, and have hosted many individual Khalistani ideologues and extremists. India has repeatedly taken this up with Canada, and the situation has sometimes led to diplomatic embarrassments.

In 2018 during Canadian Prime Minister Justin Trudeau’s visit to India, Canadian diplomats had to withdraw a party invitation to a man convicted in the attempted murder of a Punjab minister who was on a visit to Canada in 1986. Jaspal Atwal, a known Khalistan supporter, had been invited to two events organised for Trudeau before the invitation was rescinded.

Trudeau later said, “Obviously, we take this extremely seriously. He should never have received an invitation. As soon as we received the information, we rescinded it. A Member of Parliament had included this individual”.

That same year, Public Safety Canada, an arm of the Canadian government, said some individuals in the country continue to support Sikh (Khalistani) extremist ideologies and movements in its 2018 Public Report on the Terrorism Threat to Canada, taking note of the movement’s links to terrorism for the first time, while adding that overall the support for the demand has been waning over time.

In 2010, then Prime Minister Manmohan Singh said at a joint press interaction in Canada with his Canadian counterpart Stephen Harper that “the Sikh community in Canada is prosperous” and most Sikhs are “peace-loving and good citizens of Canada”.

“But”, Singh said, “a small group of people have taken to the path of extremism which does great disservice to the Sikh community, India, and good relationship with Canada.”

Prime Minister Singh urged Canada to take action, saying, “Extremism of the religious variety is something not in tune with the growing realities of the integrated world community and globalised community… I have discussed with Prime Minister Harper that the Canadian soil is not used to promote extremism. The Prime Minister told me there are laws which (have) set out limitations, which are existing. But I am confident that the government of Prime Minister Harper is fully alive to what is happening.”