Why France is seething: The US-Australia military deal that has enraged Paris

France is upset because it has lost a mega submarine deal to the US, and because it feels humiliated at being kept in the dark about what the other three democracies were planning. 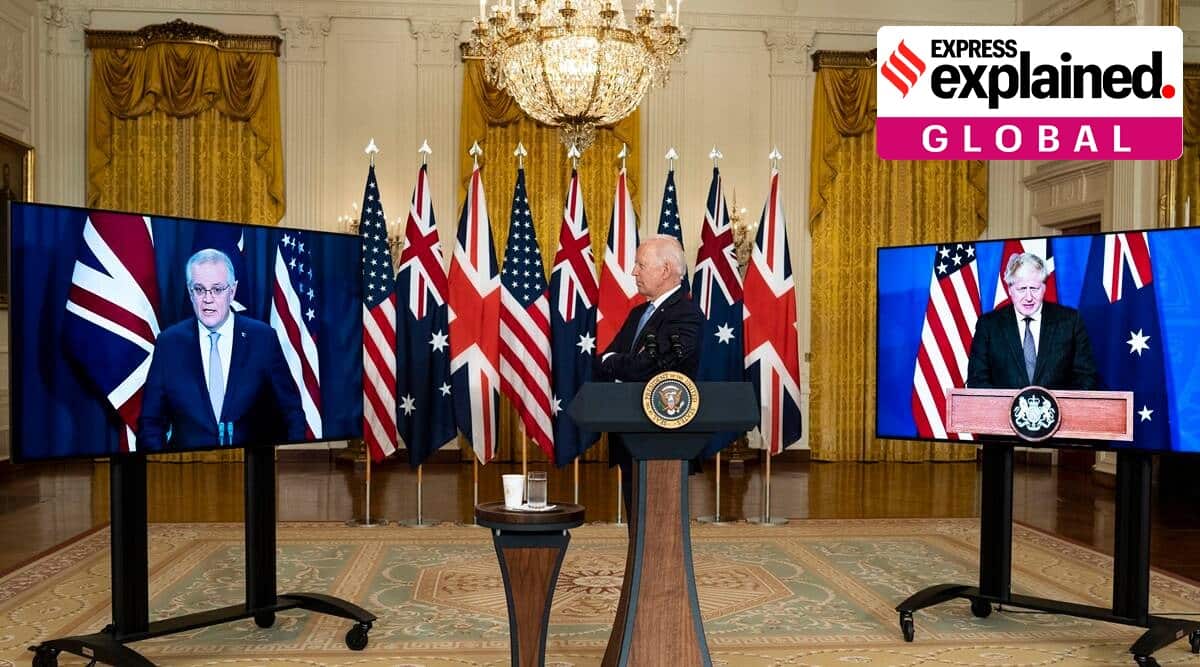 US President Joe Biden participates in a videoconference with Scott Morrison of Australia and Boris Johnson of the United Kingdom, from the White House in Washington on Wednesday, September 15, 2021. (Doug Mills/The New York Times)

The trilateral security agreement announced by the United States, Australia and the United Kingdom on Thursday (September 16), creating AUKUS (Australia-UK-US) has left France enraged, which has called it a “stab in the back”.

France is upset because it has lost a mega submarine deal to the US, and because it feels humiliated at being kept in the dark about what the other three democracies were planning.

Latest |France recalls ambassadors to US, Australia over submarine deal

“Allies”, the French Foreign Minister has said, “do not do this to each other”.

So what does Australia get out of this deal with the US and the UK?

This is only the second time in history that the US has agreed to share its capability of building nuclear-powered submarines with another country. The only other nation that has benefitted in the past is the UK, with which the US has shared the technology as part of an arrangement that dates to 1958.

Australian Prime Minister Scott Morrison announced in a statement on Thursday that over the next 18 months, Australia, the UK, and the US will “intensely examine the full suite of requirements that underpin nuclear stewardship and demonstrate a clear pathway to becoming a responsible and reliable steward of this sensitive technology”.

He said that nuclear-powered submarines “do not have the same limitations that face conventional submarines on weapons storage, speed and endurance”, and can “stay completely submerged for many months, limiting the opportunities for detection by adversaries”.

These submarines will give Australia the strategic capability to conduct operations in the larger Pacific region, including the South China Sea. This is the main reason why AUKUS is being viewed as a pact to curtail China’s assertiveness, by propping up Australia’s strategic naval capabilities.

But the three countries emphasised during the announcement on Thursday (September 16) that Australia is not seeking to acquire nuclear weapons or to establish a civil nuclear capability.

And is this only about nuclear-powered submarines?

No, it is not. While the rare willingness shown by America to share advanced military technology with Australia has been the focus of the reporting on AUKUS, there is a lot more that the deal will bring for Australia.

Foremost among the other weapons that will be made available to Australia is the Tomahawk cruise missile, which the American and British navies use for land attacks from ships and submarines.

Although the Tomahawk Land Attack Missile is a subsonic missile — meaning it travels at speeds that are significantly lower than that of sound (about 343 metres/second, or 1,235 km/hr) — its nuclear warhead can hit targets well over 2,000 km away, making it a formidable weapon.

In addition, Australia will get Joint Air-to-Surface Standoff Missiles (Extended Range), which will enable its F/A-18 A/B Hornet supersonic multirole combat jets and, in the future, its F-35A Lightning II multirole stealth fighter aircraft, to hit targets at a range of 900 km. They will also get Long-Range Anti-Ship Missiles for their Hornets.

Australian land forces will get precision strike guided missiles that are capable of destroying, neutralising, and suppressing diverse targets from over 400 km away, Morrison said in his announcement.

But why does the military empowerment of Australia with American and British help make France unhappy?

There is a history to this.

Back in 2016, Australia had signed a contract to buy 12 Shortfin Barracuda Block 1A Attack-class conventional diesel-electric submarines from the French shipbuilder DCNS, which is now known as the Naval Group (which is partly owned by the government).

Morrison did not even mention the deal with France during the three-way video conference among the leaders. And the Biden administration said it had not told the French beforehand because it was clear that they would not be happy, The New York Times reported.

The Americans had decided to leave it to the Australians to break the news to the French, The NYT said.

On Thursday, Jean-Yves Le Drian, the French foreign minister, told France Info radio: “It’s really a stab in the back. We had established a relationship of trust with Australia, this trust has been betrayed…”

He added that he had spoken to his Australian counterpart recently, and had received no indication of what was coming. Le Drian — who was President François Hollande’s defence minister when the deal was signed five years ago — was quoted as saying that he was “angry and very bitter about this break up”.

The cancellation of the deal with Australia means huge potential revenues for the French military industry are lost, while American companies manufacturing arms and military equipment can look forward to making large profits. The French minister also said that his country was not going to let the Australians get away with ditching the contract.

“This is not over,” he was quoted as saying in a report in Politico. “We’re going to need clarifications. We have contracts. The Australians need to tell us how they’re getting out of it. We’re going to need an explanation. We have an intergovernmental deal that we signed with great fanfare in 2019, with precise commitments, with clauses, how are they getting out of it? They’re going to have to tell us. So this is not the end of the story,” Le Drian said.

Also Read |Explained: The AUKUS agreement to equip Australia with n-subs, and why it has upset France

The NYT said that while the France-Australia deal had collapsed, “a harsh legal battle over the contract appears inevitable”.

The French minister also attacked the US, saying the move by the Biden administration was something that the President’s unpredictable predecessor Donald Trump might have been expected to do.

“What concerns me as well is the American behaviour,” the Politico report quoted him as saying. “This brutal, unilateral, unpredictable decision looks very much like what Mr Trump used to do… Allies don’t do this to each other… It’s rather insufferable.”

In a joint statement reported by The Guardian, Le Drian and the French Defence Minister Florence Parly said: “The American decision, which leads to the exclusion of a European ally and partner like France from a crucial partnership with Australia at a time when we are facing unprecedented challenges in the Indo-Pacific region, be it over our values or respect for a multilateralism based on the rule of law, signals a lack of consistency which France can only notice and regret.”

France has cancelled a gala that was scheduled for Friday evening at its embassy in Washington DC to mark the 240th anniversary of the Battle of the Capes, a key battle in the American Revolutionary War.

And what has prompted Canberra to ditch Paris on the deal?

For Australia, the obvious advantage is that they were able to get a much better and strategically significant technology compared to what they would have got from France.

As mentioned above, the deal with the French Naval Group was for 12 conventional diesel submarines; the US is now offering to not just provide Australia with technologically superior nuclear-powered submarines, but also help to build them — a coveted technology that is available only with a few select nations.

The rise in costs would be another factor. The French deal, initially for AUD 50 billion (almost $ 37 billion at today’s rates), was greeted with rejoicing in the French media. Cost escalations since then has ensured that Australia’s bill for the 12 Barracudas would be nearly AUD 90 billion ($ 66 billion).

What Australia will pay under the AUKUS agreement has not been declared.

Also, there is the question of delays. For Australia and the US, effective patrolling of the Pacific Ocean is an immediate requirement that cannot wait, given especially the threat from aggressive Chinese expansionism. Australia’s six Collins-class submarines are ageing and slated to be retired in five years from now.

But while Australia needs new subs urgently, the first of the French submarines would not have been delivered at least until 2035, according to a report in Politico. The building timeline of the vessels would have extended into the second half of this century. In fact, Australia had announced recently that it would undertake an extensive and costly refurbishment of its old submarines to serve the navy until the new vessels were commissioned.

Has France been a large military provider for Australia?

According to Stockholm International Peace Research Institute (SIPRI), which researches global arms trade, Australia has been the fourth largest importer of arms between 2010 and 2020, with imports worth US$ 13.6 billion. Only India, Saudi Arabia and China have imported more arms during this period.

While France has been a large provider, imports from France to Australia added up to barely 6 per cent of the arms imports from the US to them between 2010 and 2020.

France had hoped that the multi-billion dollar deal for the 12 attack-class conventional submarines would change this equation.

France has largely provided transport and combat helicopters and torpedoes to Australia. The US, on the other hand, has given Australia reconnaissance aircraft, air refuel systems, multiple kinds of missiles, torpedoes, helicopters, fighter jets, naval guns, UAVs among other weapons.

What does France’s displeasure mean beyond this immediate issue?

The secret negotiations among the US, Australia, and the UK, all of whom France considers its close allies, has left Paris seething. The French, who commentators have said are angrier with the US now than at any other time since 2003 over the Iraq war, have denounced American unilateralism.

France had also hoped that its deal with Australia would bring the two countries strategically closer. According to a report in The Guardian, France is “also looking to protect its interests, which include the overseas territories of New Caledonia and French Polynesia”, and it is “the only European country with a presence in the region, with nearly 2 million French citizens and more than 7,000 troops”.

The ugly fracas is likely to provide renewed impetus to calls for Europe to develop its own strategic and defence capabilities, and to reduce the reliance on the US, a desire something that French President Emmanuel Macron had expressed earlier.

And where does New Zealand, Australia’s neighbour and the other important country in the South Pacific, stand?

The island nation has vowed to remain nuclear-free, and the nuclear-powered submarines will be barred from New Zealand’s waters.

She was quoted by the New Zealand press as saying, “I anticipate absolutely no change in our already strong relationships with the United States, the United Kingdom, and of course Australia”.

According to reports, she said that the new deal “in no way changes our security and intelligence ties with these three countries, as well as Canada”. She also said, “We weren’t approached, nor would I expect us to be.”

New Zealand has been a close ally of all the three AUKUS nations, and, along with Canada, is part of the Five Eyes intelligence-sharing agreement, through which the five English-speaking nations share classified intelligence with each other.

Mumbai: On way to ship-breaking site, tugboat runs aground, stuck for four days