Days after tribal groups and Hindu outfits targeted each other over the hoisting of a saffron flag and alleged desecration of idols at a pre-Rajput Meena fort outside Jaipur, a dispute has erupted in Udaipur, where a flag was raised on a statue of Rana Punja Bhil. The flag on the statue of Rana Punja Bhil. (Express photo)

A dispute in Rajasthan’s Udaipur district over hoisting of a flag on August 9 on the statue of Rana Punja Bhil, a historical figure considered as a hero by the tribal Bhil community, has triggered tensions between Adivasi groups and BJP members. After the Amagarh fort dispute, this is the second issue in Rajasthan within a month when Adivasi groups and Hindu outfits are at odds over tribal history.

Who was Rana Punja Bhil?

According to historians, Punja Bhil was a contemporary of 16th century ruler of Mewar, Maharana Pratap. While tales of Pratap’s bravery are synonymous with Rajasthan, Punja is considered to be a significant character who bolstered the strength of Pratap during his battles with Mughal emperor Akbar.

“When Maharana Pratap was readying for the battle with Akbar, the tribal Bhil community voluntarily came to his assistance and at the time the Bhil army was commanded by Punja. Owing to his status as a commander, he was bestowed the title of Rana,” says historian Rima Hooja.

She added that Punja was highly respected and there are still awards and scholarships named after him.

“Bhils are an ancient tribe, whose history goes back to even mythologies. Due to their unmatched knowledge of the hills and forests of Mewar, the community has always exercised a strong influence in the region,” said Hooja.

Why is there an effort by various groups to appropriate the legacy of Rana Punja Bhil?

Historians and political analysts from Mewar say that in recent years, various groups are trying to appropriate the legacy Rana Punja Bhil .

“It is not yet clear if Punja himself was a Bhil or a Rajput chieftain who commanded a large army of Bhils. But there is no doubt that during Maharana Pratap’s campaign against Akbar, including the battle of Haldighati, Bhils played a crucial role. Due to lack of soldiers, a shift was seen from the earlier custom wherein only kshatriyas were allowed to take part in battle,” says Bhanu Kapil, associate professor and head, Department of History, BN University, Udaipur.

He added that in recent years, repeated attempts have been seen to establish Punja as a tribal hero.

“Much like Maharana Pratap, Rana Punja Bhil too has become a character with various political parties wanting to appropriate his legacy. In the past three decades, Punja has been styled as a tribal icon and this positioning of him has coincided with the rise of political parties such as the Bharatiya Tribal Party (BTP), which talks of tribal assertion. The demand for a separate Bhil Pradesh comprising the tribal districts is also related to the issue, wherein legacies of historical figures are being claimed by one political party or another,” he added. 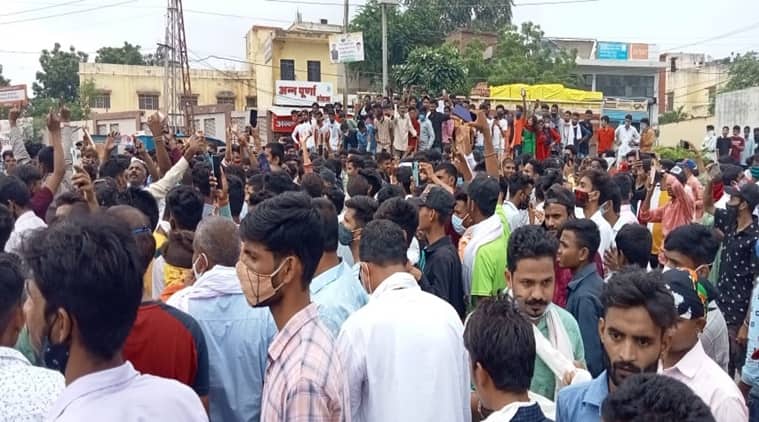 Members of the Akhil Bharatiya Adivasi Mahasabha protest in Udaipur on August 9 against the flag put up on the statue of Rana Punja Bhil. (Express photo)

Earlier a bastion of the BJP, the Mewar region has in recent years been witness to the rise of the BTP, which won two seats in the 2018 Rajasthan Assembly elections banking on tribal support.

Why did Bhils exercise significant influence in Mewar?

Historians say that the Bhil community-classified as a scheduled tribe in Rajasthan-, which is a forest dweller group has exercised significant influence in the Mewar region and throughout the past, the Rajput rulers of the region have forged alliances with the tribal group.

“Bhils have always had control over the forest produce from Mewar which is rich in natural resources. The Bhils were also adept in guerilla warfare with bows, arrows and slingshots and were a significant part of the Rajput resistance against the Mughal Army during the battle of Haldighati owing to their knowledge of the region’s topography. Later during the British period as well, the Bhils and the colonial powers were often engaged in confrontations,” said Kapil.

Historian Hooja said that the Rajput rulers consistently recognized the importance of Bhils in their kingdoms and the emblem of the Mewar royal family also has a Bhil alongside a Rajput, reflecting the importance of alliance between the two.

What is the present dispute about?

On the occasion of World Tribal Day on August 9, when members of the Akhil Bharatiya Adivasi Mahasabha gathered near a statue of Rana Punja Bhil in Udaipur, they objected to a flag hoisted on it. Tribal leaders have alleged that a saffron flag was put up by the BJP and Sangh Parivar on the statue, which is against the culture and identity of the community.

An FIR has been lodged in the matter by members of the Adivasi Mahasabha, with the accused including a former BJP councillor. The BJP has denied that the saffron party or the RSS was involved in any way and it has said that the flag in question was not saffron but kesariya, the sigil of Maharana Pratap and the flag of Mewar.

Tribal groups along with outfits such as the Bhim Army protested on Monday against the hoisting of the flag, following which it was taken down after the intervention of the administration.

Why is it being compared to Amagarh row?

Days before the incident in Udaipur, a similar dispute in Jaipur’s Amagarh fort had snowballed into a major controversy with tribal groups and Hindu outfits targeting each other. After a saffron flag was taken down from the fort on July 21, Hindu outfits had accused Independent MLA Ramkesh Meena and other members of the Meena community of tearing it down.

While the MLA had rejected the accusations, some members of the Meena community had accused Hindu groups of trying to appropriate Adivasi symbols and erasing tribal culture. MLA Meena had also maintained that Meenas are not Hindus and have their own indigenous culture.

The dispute had led to four FIRs being lodged, including one against Suresh Chavhanke, the editor-in-chief of Sudarshan TV, for allegedly hurting tribal and Meena sentiments.

BJP Rajya Sabha MP Kirodi Lal Meena had led the pushback against the narrative that Meenas are not Hindus by insisting that the community comes under the Hindu fold. He had also dodged the police and hoisted a flag of a Meena deity on the Amagarh fort.